Mayoral primary election results are in. Jennifer Roberts swept the votes in the Democratic race, leading Dan Clodfelter by a solid 10 points but not enough to land the party’s nomination. The two will face off in a runoff in October. The Republican race was a landslide victory for Edwin Peacock who racked up 66 percent of the votes to beat out his opponent Scott Stone.

You don’t have to be elected to make a difference: A note to those who lost yesterday [Chiou]
Amy highlights seven people making a big difference in Charlotte, some quietly under the radar and all without holding an elected position. To those candidates who didn’t make it past the primary, we all hope you’ll still pour yourselves into this city in similar ways.

A guide to Charlotte’s Wall Poems [Levans]
If you’ve spent any time in or around Uptown in the last two years, odds are you’re familiar with Wall Poems. They’re the cheerful salute on the side of Dandelion Market, that uplifting blue retaining wall overlooking 11th and McDowell and the clock that reminds us to slow down at @7th Restaurant. Check out an interactive map and photos of where to find them all.

Latta Plantation Nature Center & Preserve: History, horses, hiking and the occasional snake [Levans]
The county’s largest nature preserve (1,343 acres) is one of my favorite places for outdoor exploration because of its proximity to Charlotte (13 quick miles up I-77), waterside trails (along Mountain Island Lake) and supplemental activities (at Carolina Raptor Center, Latta Plantation and the Equestrian Center). Watch out for snakes.

Ad agency Eric Mower + Associates has a Silver Lion in their office [Williams]
Take a tour of their Charlotte office, which is home to 36 employees and a coveted Cannes Silver Lion.

Small businesses can get free tickets to Davidson pro golf tournament (and it could be the last) [Dunn]
The former Chiquita Classic is now sponsored by Web.com. This could be its last year in town so get those free tickets while they’re hot. This tournament is considered the “minor league” of pro golf, but the top prize is still what I’d argue to be a pretty major $180,000.

16 social media jobs for social media marketers who get it, open right now [Williams]
If you’re looking for a job you need to become best friends with Ted immediately. I’m not saying he can get you these jobs he rounds up, but his ability to even find them and put them all in one place is half the battle. Get hired, Charlotte.

Behind the Curtain: My day as a runway model [Maddrey]
Erin got the Gigi Hadid treatment when she walked the runway for The Boulevard at South End at the Southern Women’s Show. Two questions for Erin: Did you or did you not practice your walk at home in front of the mirror? Where are your Glamour Shots?

CLT Playlist: 35 live music picks for September 16 – 20 [Gassaway]
This week I was informed of Danny’s past as a star Irish dancer in high school and now I’ll never read his music recommendations the same way again. Note: They are more credible now, not less.

JJ’s Red Hots is rolling out all-you-can-eat hot dogs on Thursdays [Instagram]. Summer is officially over in a week so eat whatever you want. Promo runs Thursdays from 5-8 p.m. through November 12.

The Panthers made everyone the MVP yesterday [Instagram]. The team rolled out the blue carpet at Trade and Tryon for unsuspecting office workers who just wanted to buy lunch. Instead, hungry lunch seekers were ushered through a giant inflatable Panther head and introduced over a loud speaker like they were taking the field. Hilarious.

Charlotte named “Startup Hotbed” by Inc. [Tabaka/Inc.]. Packard Place and Queen City Forward both got shout outs. The three other cities on the list were Stockholm, Columbus (Ohio) and Atlanta.

Panthers now valued at $1.56 billion [Spanberg/CBJ]. Despite a sizable 25% increase since 2014, Carolina dropped from 17th to 19th in worth out of 32 teams overall according to Forbes.

Cell phone service should be better at Bank of America Stadium this year [Peralta/Observer]. If your biggest concern when watching a game is how quickly you can watch something on your phone instead, you’re in luck. Customers of Verizon, AT&T and Sprint should see a difference at games this season.

I spent a lot of time creeping around outside looking at Wall Poems yesterday and can now confirm that I can’t wait for First Ward Park to open. 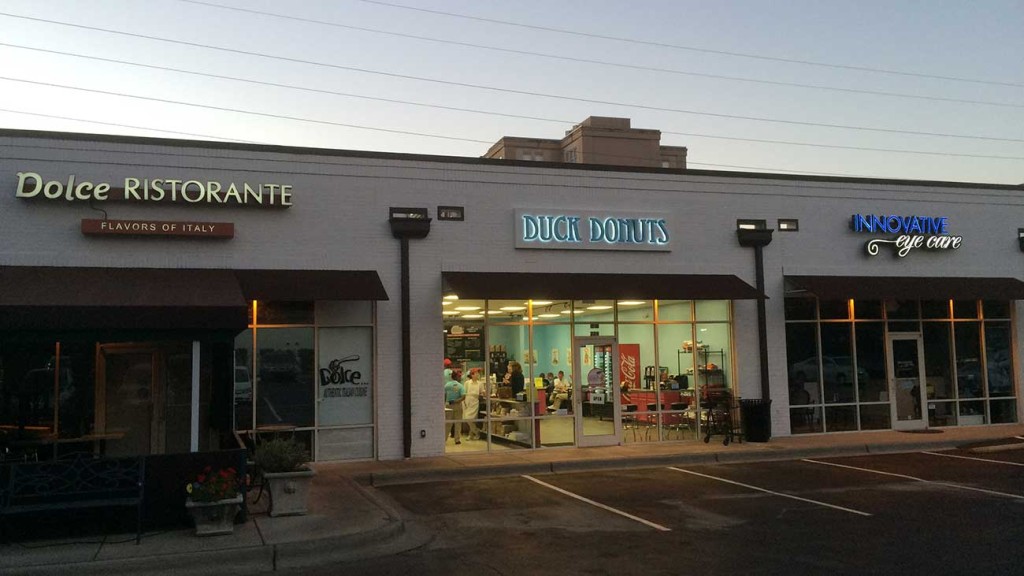 Now Open: Everything you need to know about Duck Donuts in Dilworth (18 photos)