Behind the Kitchen: A conversation with Drew Dodd of Stagioni 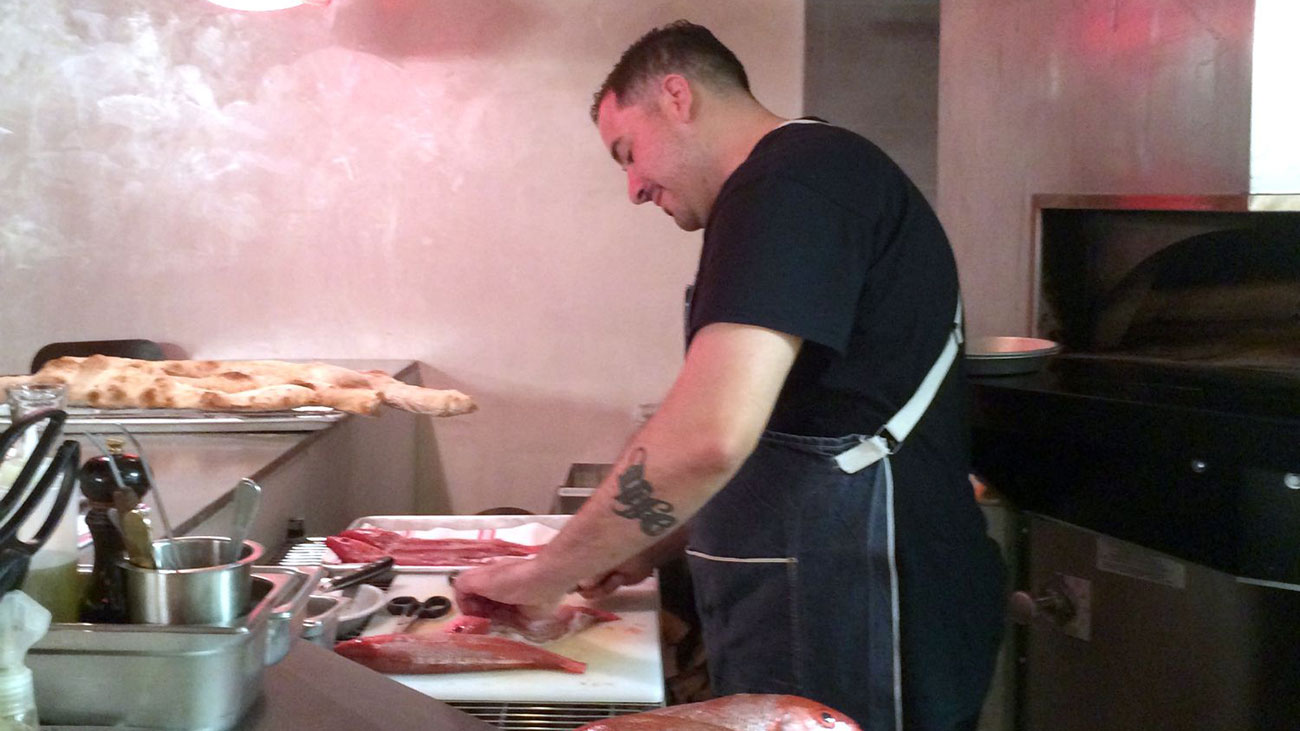 On a Monday afternoon, I had the opportunity to sit down with Chef Drew Dodd at Stagioni. We sat at the bar, in front of their brick oven, facing the amazing open kitchen and talked about all things food. We talked about how great weekend trips to Asheville are, how salmon is boring and how Charlotte really needs some Korean barbecue in its life. We also agreed that people that don’t have their mise en place together drive us nuts. I’d eat ramen with this guy any day… What are your thoughts on social media playing such a huge role in the restaurant scene?  Has it made an impact good or bad?

I think that it’s just had an impact on the world. I think it’s cool. I wouldn’t say that I am a big follower of that kind of stuff. I definitely understand the need for it. I think it’s cool how people can reach out to a restaurant or get a behind the scenes look to what’s going on. I think there are a lot of people who are really using it in cool ways. I think it’s even bigger in certain aspects of the food world, like food trucks. I feel like you almost kind of have to have that social media thing in order to find out where they are or what’s going on with them, you know trying to keep track of them.

Walk my dogs. It’s my routine, go home and walk my dogs. Sometimes I’ll fix myself something to eat or figure out food.

That’s a hard question. The hardest part I think is that you miss out on some events that happen in your life. I think, to me, that would be the only thing that I really have a hard time with. You know, missing those special events, holidays. But, you know, I love the fact that it’s something different everyday, that there’s a different problem. Some of it is predictable to a certain extent. I think we are right on the cusp of exploding into a really big food town. I think the sky’s the limit. There’s no telling where we’ll be in five years. But I think the next five years will be a lot faster than the past five years.

I’m from Nashville, so I have to say Nashville is up there. Between the new stuff, the comfort foods and the food I grew up with, it’s probably number one. Closer to here, I’d say Asheville. Asheville’s food scene is so fun to be in. It’s such a great weekend getaway. What is your prediction for the next “Big Ingredient” in the food world?

It’s not an ingredient, but, you know, the one style of restaurant that I feel I don’t get here, is Korean barbecue. I’d love to see Charlotte get a true, authentic Korean barbecue restaurant.

Do you have any advice you would give an aspiring chef that you wish someone would have given you when you first began your culinary journey?

Find the best chef, in the closest town you can and beg him to let you stage with him. Early on in your career, I wouldn’t advise someone to not have longevity at a restaurant. But at the same point, I think it’d be really nice to bounce around, spend a year or two at really nice places. Find a chef that you want to learn from, seek that out and go work for him.

What is your biggest pet peeve in restaurants?

Oh, there’s a lot of stuff. Disorganization. It just pains me to watch someone work that’s not organized. They don’t have their mise en place ready and don’t work clean. Those are the three things that really drives me up a wall. Is there an ingredient or dish that you feel in completely overrated?

Salmon. 100 percent. I think it’s such an overused fish. I’ve never been a fan of it. It’s just boring. I understand the recognizability, but in a state that has beautiful fish like trout, I think that it could often sustain the same crowd that tends to go for fish. I just hate it. How do you juggle the work versus life balance?

Not well. I don’t know, you should probably ask my wife that. She probably has a different outlook on that. It’s hard. Running a restaurant is hard, even when you don’t want to be thinking about it, you are. But I will say that working for Bruce Moffett, that’s one of his major focuses. Being able to enjoy life and take the time off. It’s definitely been a little bit more balanced coming here.

What do you think about this “Celebrity Chef” phenomenon?

I think it’s good to see the culinary world getting exposure. I think that there’s different kinds of cooking for every person out there. That’s the great thing about this industry. It’s that there’s so many levels and so many different styles, so many different tastes. I might not identify with their style of cooking, but obviously there are certain people that do. It’s cool to see people get recognition. I don’t think it’s a route that I would necessarily want to go, but if it’s going to bring the spotlight to cook and what we do and making people more interested, hopefully educate diners more. Then I think it’s an elevation for everyone. I think it’s fun to interact with people on that level and to be able to play an educator role is cool.

I don’t even know if I can pick a favorite. That’s like trying to pick your favorite child. I don’t think  it’s possible. I really think there’s aspects in everything we do. I just love the pizzas. I love all of the pastas we make in house, they’re phenomenal. What is your favorite restaurant in Charlotte?

I eat based on my cravings. I have specific places I go to for specific dishes. I love Good Food on Montford, I have to shout out there. Barrington’s if you’re in the mood for that upscale dining. I’ve been eating a lot of Futo Buta, that restaurant is phenomenal. Oh and then I go to Le’s Sandwich shop.

Connect with Chef Drew and Stagioni: