How I Work: 20 quick questions with Andy Wilkerson, Vice President of Blackhawk Hardware 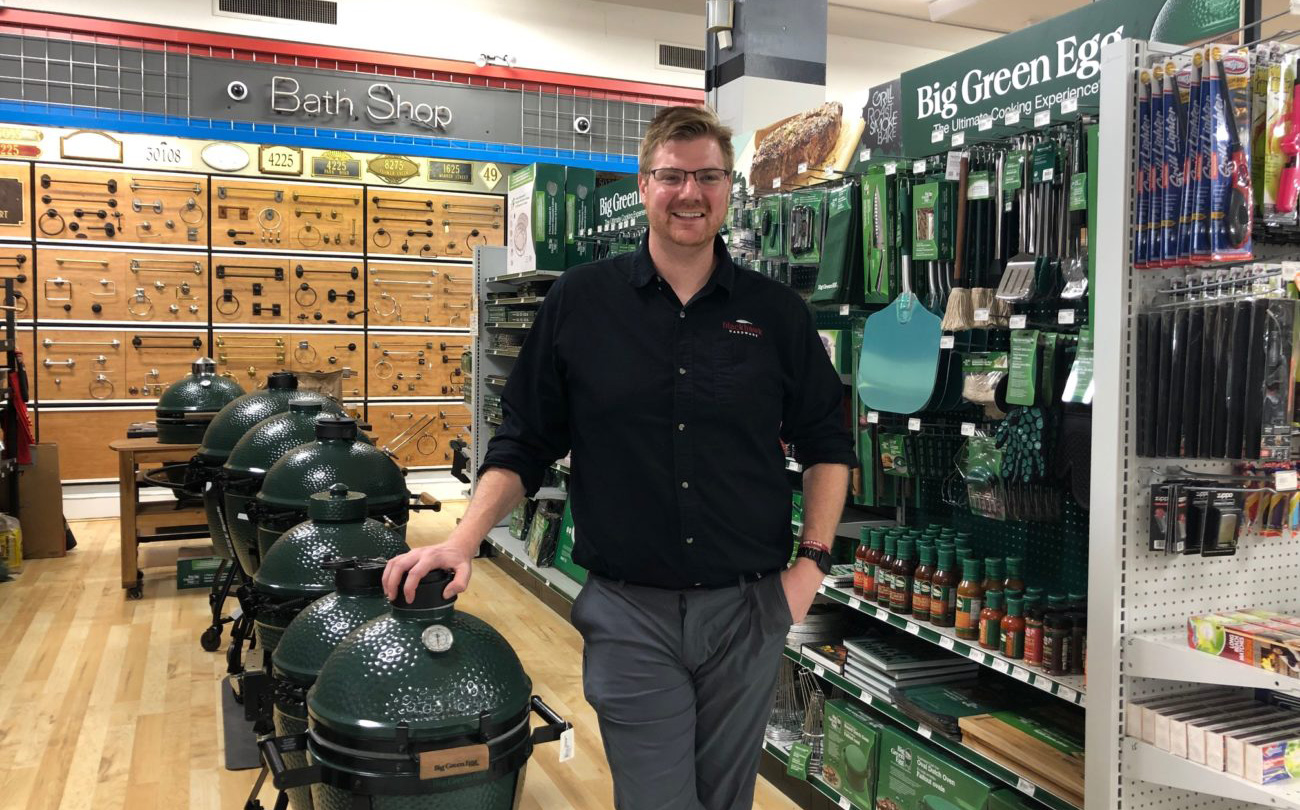 Andy Wilkerson is the Vice President of Blackhawk Hardware, located in Park Road Shopping Center. He’s the only child of founders Jim and Barbara Wilkerson, who founded the store in 1977 and are still actively involved.

At 36 years old, Andy says Blackhawk has been a part of his life for as long as he can remember. He has vivid memories of playing in the store as a young boy, when the shop used to be located across the lot from its current location.

Wilkerson describes Blackhawk as “hardware-focused but with a little bit of everything.” Including “stuff you didn’t even realize you wanted and things you had as a kid and forgot about.” Wilkerson also notes that 70 percent of the store’s clientele is women.

This includes renovating the basement, restructuring the main level, installing a red spiral slide to travel from the main level to the basement, adding a remote control model train set around the ceiling, creating a wood shop viewing area and adding a new entrance/exit accessible from the back parking lot.

The expansion should be complete in March 2020. And don’t worry, the free popcorn machine isn’t going anywhere. 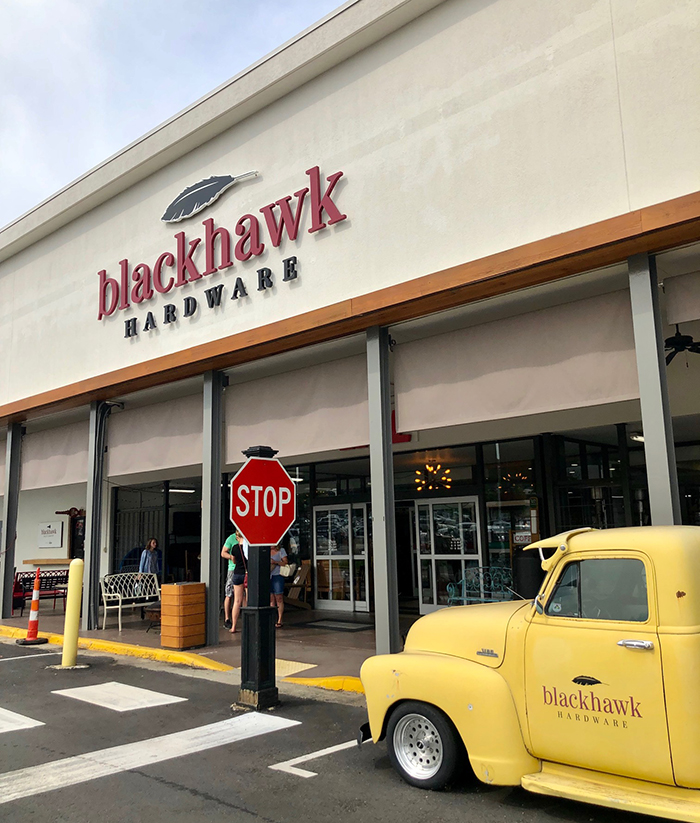 (1) Where does the name Blackhawk come from?

Andy: My father is tall like I am and he’s a Wilkerson, so we’re always in the back of the line, right?

At the time, phone books and the yellow pages were a thing. You wanted a name close to the top. He didn’t want to be like AAA Hardware, and he didn’t want to name it after a street in case he ever moved.

So he was flipping through the Chicago phone book when he was up there and noticed there’s lots of Blackhawks, for obvious reasons. He was like, “That’s a great name for a hardware store!”

So we’re named after the hockey team in Chicago. It was literally just that the hardware co-op we initially belonged to was stationed in Chicago.

(2) What is the connection to Ace Hardware? If people assume you’re not locally owned, they’re incorrect, right?

Andy: Right, we’re a co-op. With a co-op, all the members of the co-op own the parent entity. We own a part of Ace.

We buy from Ace, but we’re allowed to buy from other people as well. We’re pooling all our resources together in order to go to a vendor somewhere and go, “Hey, we’re going to buy 100,000 of these things instead of 10, give us a better deal.”

It’s pooling our resources together, but we’re our own individual stores.

Andy: I solve problems. I clear obstacles for other people. And I look out for opportunities. If a customer comes in, I’m probably more in the office rather than out on the floor, but it’s incredibly important I spend time on the floor, too — on weekends especially and during the Christmas season.

Just this morning our general manager and I walked part of the store aisle by aisle, taking photographs of things we thought were great and things we thought needed improvement. It’s doing that kind of thing. I don’t have any set, “I only do these xyz things.” You can’t as an entrepreneur and business owner.

I’m here Monday through Thursday and every other weekend. 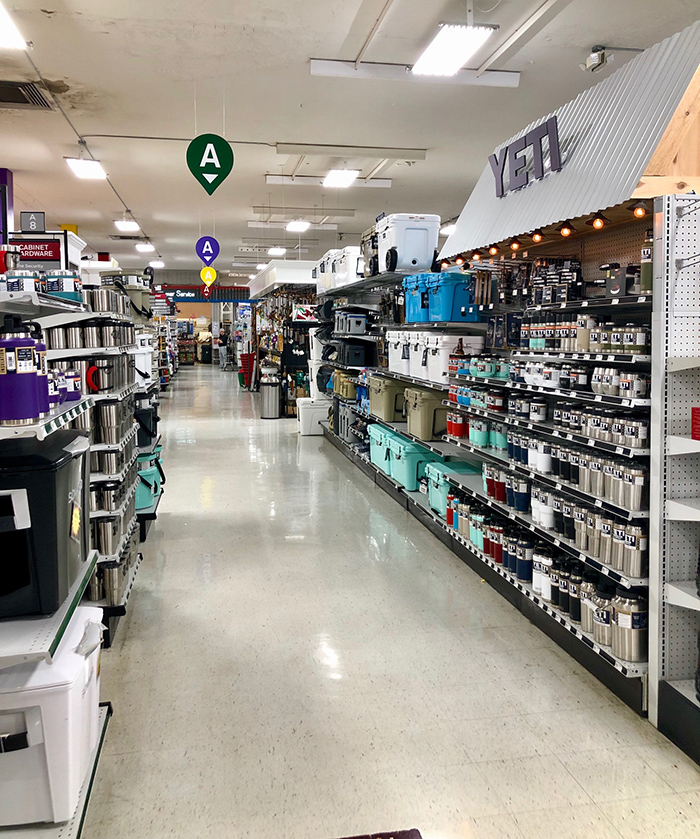 (4) What is a DIY skill every homeowner should master, regardless of level of handiness?

Andy: Being able to look it up on YouTube. Seriously!

If you  have a problem, there’s some guy out there that spent days creating a video to explain, in minute detail, how to do something. You need to be willing to make mistakes. I’m very good at fixing things, because I’ve made lots of mistakes in the past.

Andy: I actually did a search on this. It’s Inis perfumes. Inis is the fragrance of Ireland and we just sell tons of it. After that it’s Big Green Egg and Weber. Another weird one, Greenwich Bay Trading. They make soaps and we sell thousands of them. 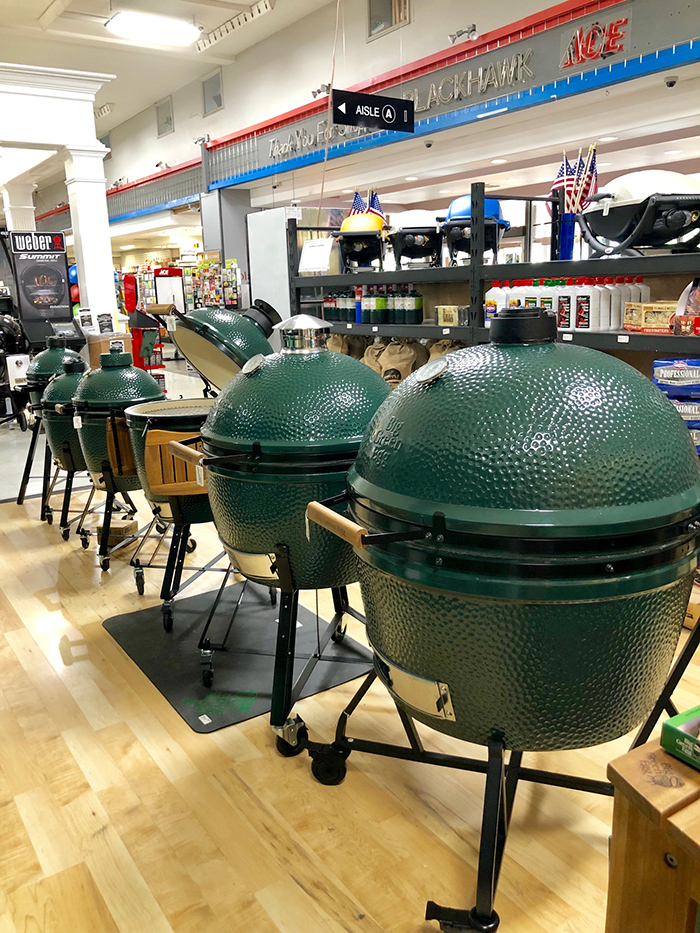 (6) What’s the most unique item you’ll find in the store?

Andy: That depends on your definition, but I went for my favorite fun item, it’s the Bug-A-Salt gun. I’ve got one at my house and it makes killing bugs so much fun. It looks like a Nerf gun and it shoots a cone of salt at a bug and it disintegrates it.

Also the Swurfer. It’s a tree swing, slash almost like a skateboard-looking thing that you stand on and swing. I’ve got one in my yard, and it’s so much fun.

(7) How do you spend the first hour of your day?

I was listening to an interview the other day, I wish I could remember who said this, but he was talking about a similar thing.

And the difference in that thought is pretty great. If people remember you because you love tea, that’s much more powerful than just knowing that you don’t like coffee.

(8) Do you use social media? If so, do you have a favorite platform?

Andy: No. I don’t like social media. It’s something about me that I’m not a fan of it. It’s got lots of great things about it, if I had to choose I’d probably pick Instagram because I’m a visual person.

(10) What everyday thing are you really good at?

Andy: Getting things off tall shelves.  (Andy is 6-foot-7, making him my second tallest How I Work interview behind Cody Zeller.) 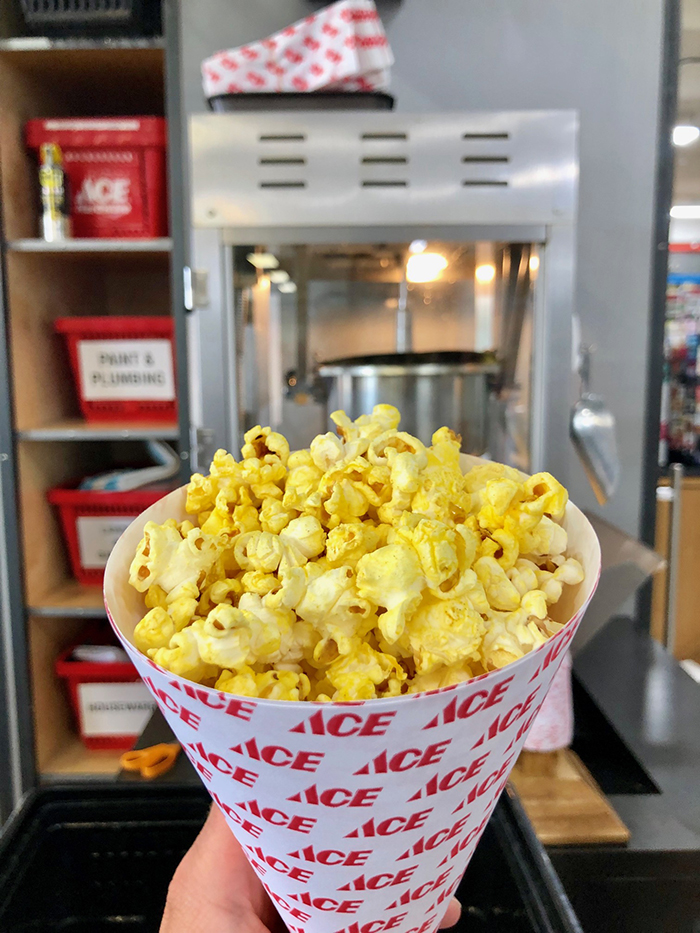 Andy: I try not to, because I need to be aware of what’s going on. If I am, it’s actually more of a book on tape. I listen to about 77 books a year now.

(13) If you’re meeting someone for lunch or dinner, where might you be meeting them?

Andy: I love Seoul Food Meat Co., I go to Burton’s a lot, it’s a great place for business meetings.

(14) What’s one skill in high school that they don’t teach you but really should?

Andy: Finances. 100 percent, man. They just do a crummy job of how to balance a checkbook, how to live within your means, how to do a budget, how to do basic taxes. It’s criminal they don’t teach that, honestly.

(15) What is your favorite time-saving shortcut?

Andy: Immediately emailing or texting someone or adding something to my phone calendar when it happens or when I think about it. If I go, “I’ll do that in five minutes” it never happens.

It saves me so much time later on, even if it’s not perfect. I don’t then have to fix a problem later on or rush to an appointment I forgot about. When it happens, I put it in my phone.

Andy: Other people. Our average employee has been with us 12 1/2 years. We have a couple in their twenties and one or two in their thirties.

(17) What’s a situation that makes you feel intimidated or nervous and how do you prepare?

These are the exact reasons it’s not working out, I recommend you do this differently in the future, and I wish you the best of luck. Short, very direct, and other than that there’s no good preparation. It’s the one thing I truly dread.

(18) How do you decompress after work?

Andy: A book on tape, I love going to walk with my 2 1/2 year old. At that age they see a slide, and it’s the greatest thing of all time.

(19) What’s your favorite side project or hobby?

Beloved Cotswold shop Toys & Co. has put itself up for sale