A new chapter begins for Mr. K’s as longtime owner passes away 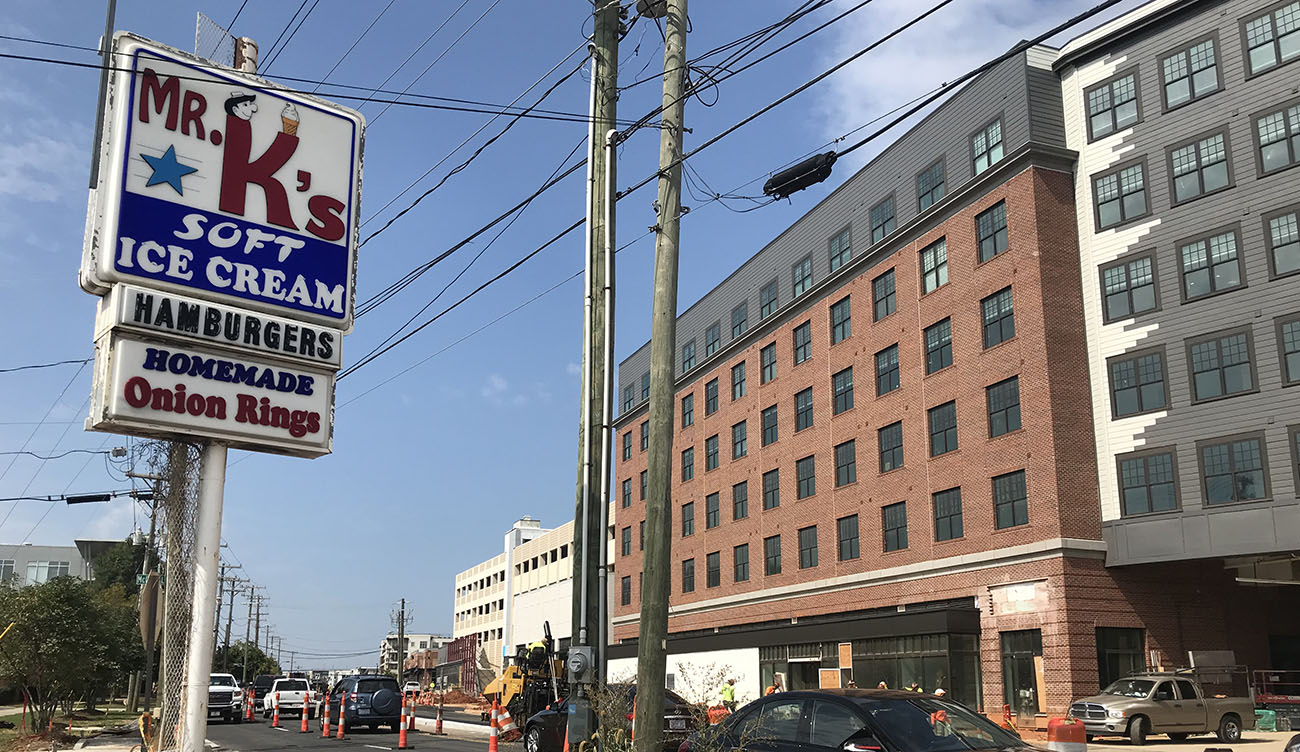 When Hurricane Hugo ripped through the Carolinas in September 1989, downing thousands of trees and causing billions in damage, Mr. K’s in South End was one of the few Charlotte businesses that didn’t lose power. Hundreds of customers in the neighborhood formed lines around the block for coffee and a meal.

Theodore and Demetra Karres extended their hours and tried to feed everyone. But for several days after a storm, it was near impossible to get food deliveries.

So their daughter, Pamela, a 26-year-old N.C. State graduate, packed her car full of everything from lettuce to beef to bread and drove from where she lived in Raleigh to Charlotte to restock the diner.

She made the five-hour roundtrip drive every day for nearly four weeks, until crews restored power throughout Charlotte.

“It was a time of need, and everybody came together,” George Karres, Pamela’s younger brother, tells me. Seven years later, in 1996, Pamela and George’s parents retired and the children took over the family business.

Over the next 23 years, Pamela greeted most of the customers who walked through Mr. K’s doors, even while fighting breast cancer. She remained a fixture at the South Boulevard diner until a few months ago.

On July 27, Pamela died, 19 years after doctors first diagnosed her cancer. She is survived by her husband, George Dizes; two children, Mimi and Louis; two brothers, Andrew and George; her parents; and two dogs, Aero and Coda.

“She remembered everybody’s name and she greeted them with a big warm smile and asked how they were doing,” Pamela’s widower says during a recent interview at the restaurant. Dizes joined the family business when Pamela’s brother left it to pursue a career in real estate in 2005. 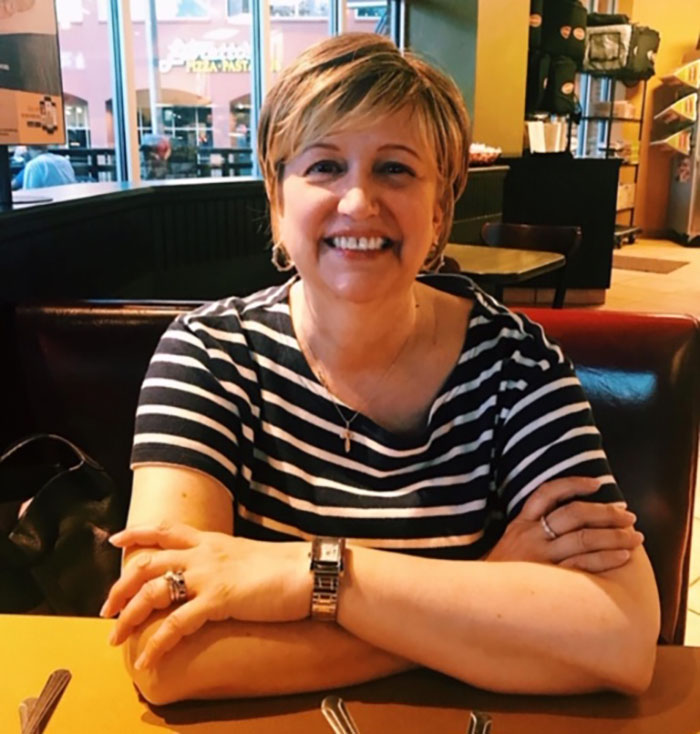 The parents of Pamela Dizes opened Mr. K’s in South End in 1967. Dizes took ownership of the restaurant in the mid-1990s with her brother, George.

Pamela’s parents immigrated to the United States from Greece in 1955.

Theodore and Demetra planted roots first in Chicago, where they operated a dry-cleaning business for years. Pamela was born in 1962, and her brother Andrew came along two years later. The family moved to Charlotte in 1966.

A year after that, their youngest brother George was born, and the Karreses bought a tiny ice cream shop called Zesto’s at the corner of McDonald Avenue and South Boulevard.

Filled with aging industrial warehouses and few restaurants, South End looked much different than it does today. Mr. K’s was a couple of blocks from where the old wooden ballpark Clark Griffith Park once stood on Magnolia Avenue. That’s where Charlotte’s minor-league baseball team, the Charlotte Hornets, played until the early 1970s.

Theodore added Coca-Cola, potato chips and hot dogs to the menu, then changed the restaurant’s name to Mr. K’s.

In 1971, the Karreses razed the old ice cream shop and built the structure that still stands there today.

The restaurant’s interior has changed little since then. Original blueprints and a building permit for Bank of America Stadium hang on the wall. Hugh McColl, Dell Curry and Ron Rivera have all frequented the place over the years.

These days, Mr. K’s is often among the first places mentioned in debates over the best burger in Charlotte. 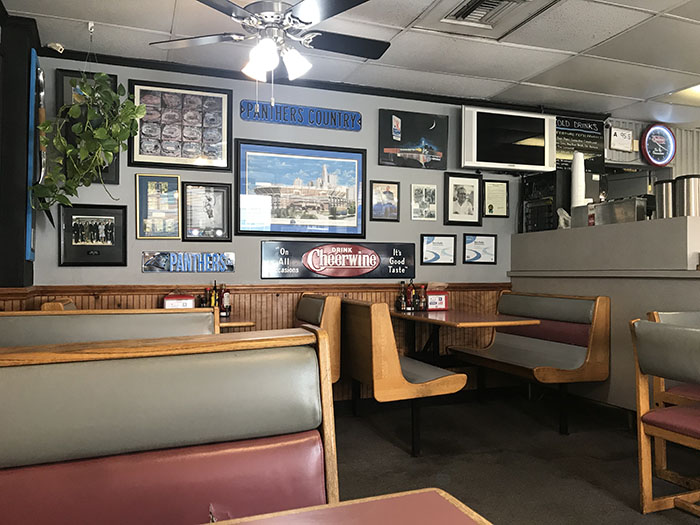 Mr. K’s opened in South End in 1967 and has been family-run ever since.

Mr. K’s is one of many family-owned restaurants in the Charlotte area started by Greek immigrants.

A few others include Open Kitchen, Old Pineville Premium Pub, the Diamond, and even the chain Showmars.

Each family has its own reasons for getting into the restaurant business. One commonality, though, is something called philoxenia, (usually pronounced fil-OH-zeen-yah) a Greek philosophy that means “friends to strangers,” Kathleen Purvis wrote in The Charlotte Observer last year.

The philosophy extends beyond welcoming just customers. In Greece, Purvis wrote, philoxenia requires you offer help to anyone in need, especially by sharing food.

That mentality explains why Pamela drove thousands of miles to bring supplies to her family’s restaurant in her devastated hometown in the late 1980s.

“She always did what was necessary to take care of the customers,” George Karres says.

Pamela married George Dizes in 1997. She’d met him in his native Toronto while on a visit with relatives years earlier. Pamela gave birth to a son, Louis, in 1999. Fifteen months later, when she was pregnant with her daughter, Mimi, Pamela was diagnosed with breast cancer for the first time.

Doctors induced labor a few weeks early so that Pamela could begin treatment, which included a lumpectomy, chemotherapy and radiation. Within several months, Pamela’s cancer was in remission.

For a while, life was back to normal for the growing family.

But in 2007, the cancer came back, seven years later after her first diagnosis. This time, along with the chemo and radiation, Pamela got a bilateral mastectomy, the removal of both breasts to prevent further spread of the cancer. Again, after that, doctors told her the cancer was in remission.

And again, life resumed as usual for a bit. She got the kids ready for school, greeted customers and worked the cashier at Mr. K’s, then was back at home when Louis and Mimi got back from school.

Seven years after that, in 2014, the cancer returned one final time. It spread into her liver and bones. Pamela’s oncology team at Levine Cancer Institute told the family the cancer was now considered a chronic condition, and that they’d do everything they could do keep her comfortable.

Pamela told her team she wanted to be around to see Mimi graduate from East Mecklenburg High School. Donning a royal blue cap and gown with a National Honors Society patch on the front, Mimi graduated this past June. From a wheelchair in the audience at Bojangles’ Coliseum, her mom looked on proudly.

Throughout her 19-year fight, Pamela managed her exhausting treatment with courage, Dizes says of his wife. She still showed up to the restaurant for work, still went home to greet the kids when they got home from school, still made time to teach Sunday school at Holy Trinity Greek Orthodox Cathedral in Dilworth.

“She was a warrior,” Dizes says.

Mr. K’s is a testament to the staying power of family-run restaurants even as new development encroaches.

In the 1970s, Mr. K’s faced a challenge that some customers feared might bring its end: a Hardee’s, opening right across the street near Atherton Mill.

“Somebody mentioned to us ‘Oh you guys will close before they do,'” George Karres says. “We never got pushed out of the neighborhood.”

Today, the restaurant faces a far different — and far bigger — sort of development challenge: The entire neighborhood is rapidly redeveloping.

Nearby on South Boulevard, the building that housed Owen’s Bagels recently sold for $7.3 million. The new owners are in the midst of multi-million dollar redevelopment to upgrade the 1950s-era building, and will add popular restaurants such as Snooze AM Eatery.

Across the street from Mr. K’s, the developer Edens is wrapping up a $100 million renovation of the historic Atherton Mill property. It’ll be a shopping destination filled with chain restaurants, hundreds of luxury apartments and popular retailers.

Developers have knocked on Mr. K’s door, but George Dizes, Pamela’s widower, has no plans to go anywhere.

It’s tough for a family-owned business to keep up, though, especially in a fast-changing neighborhood, he says, bemoaning the loss of mom-and-pop restaurants and the rise of chains. 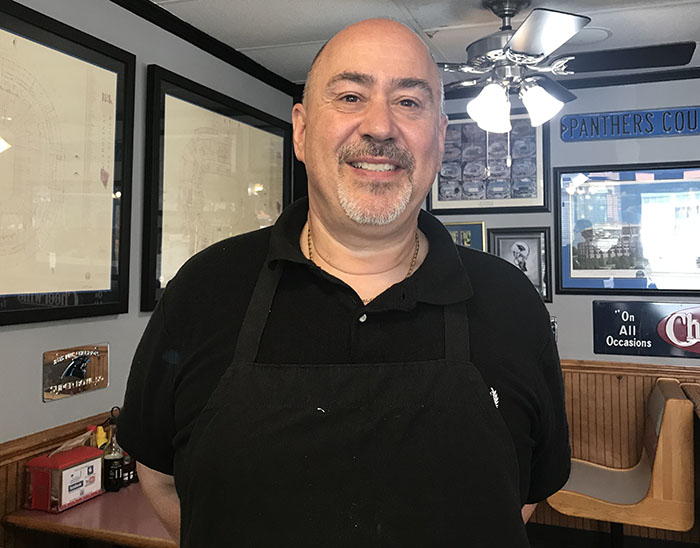 George Dizes has operated Mr. K’s in South End for about 14 years.

“The industry as a whole is suffering,” Dizes said. “The biggest victim is the customer because you can’t get the quality you used to get before out of the chains.”

He acknowledges that a major challenge he and others face is burnout. Dizes, 56, usually gets to Mr. K’s around 7 in the morning, and doesn’t leave until around 9 at night. He’s been doing that for almost 14 years straight, and is looking for more help.

He won’t let his kids take over, though. The breakneck pace has kept him from things like first steps and recitals. “I wouldn’t want that for them,” Dizes says.

He took only nine days off work after losing Pamela. He still has bills to pay, he says, and his kids are leaving for college soon — Mimi will be a freshman at N.C. State, Louis will be a sophomore at UNC-Greensboro.

It’s when he talks about them that his eyes well up. They’re coping the best they can.

“They’re both leaving (this) week for college, so that’ll leave me with an empty house and a lot of pain and tears,” he says. “It’s just me and the dogs.” 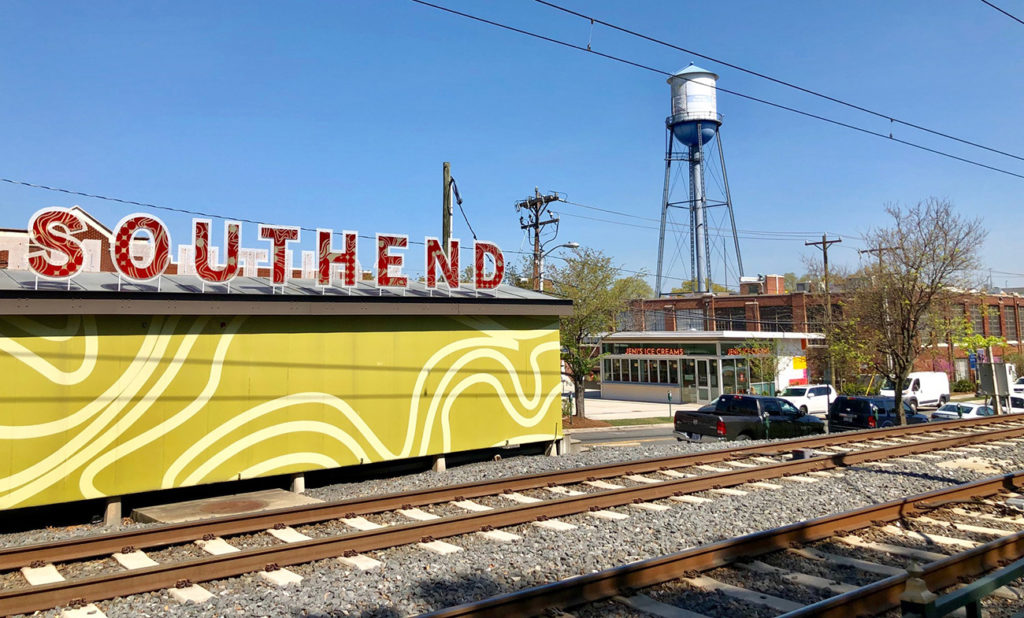