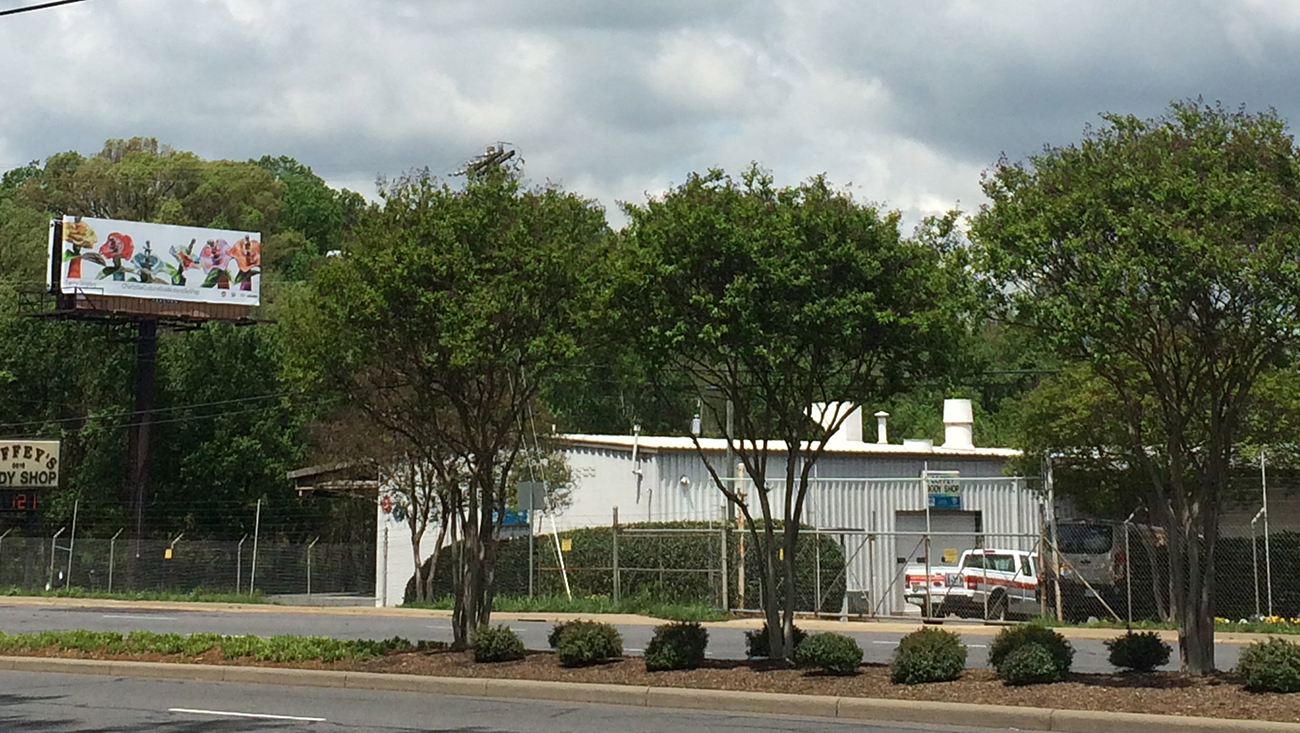 I expected the ArtPop driving tour to be easy, but it wasn’t. Here’s the premise: ArtPop was created through a collaboration between the Arts & Science Council and Adams Outdoor Advertising to display the works of 20 local artists on available billboard space throughout Charlotte in 2015. I wanted to see as many as I could in an hour.

I planned ahead: I chose an 11-mile stretch from South End to a spot on Wilkinson Boulevard, more specifically, Coyote Joe’s. After scanning the ArtPop Driving Tour link for the most up-to-date billboard locations and seeing that they looked pretty clustered and close in that area, I figured I’d drift just a little past Coyote Joe’s toward Belmont and end up seeing five billboards during the trek.

I saw two. At least, I thought I did. The first one whizzed by unexpectedly. I was almost 15 minutes into my drive and one mile from the airport. The windows were down and I was just starting to tire of my driving technique: keeping to the right lane while staring down every approaching billboard and swiveling my skull to gawk at the flip sides in case I was missing anything. My right hand clutched a pen, scribbling every musing and observation onto a notepad in my lap, while my left hand steered the wheel. Only experienced journalists should do this.

…A barn with a cross on it. –The Billy Graham Library

Terry Shipley’s flowers flew by. I swung a U-turn to take a look. I got out of my car and stared up and they (the flowers) stretched brightly across a white expanse of billboard, hanging in space over a snarl of barbed wire and Coffey’s Body Shop. On her website, Shipley says she explores with flowers in her ceramic work, because, “Of all the possible favorite images in nature, flowers are mine. Inspired by an artist making ceramic and button flowers, I wondered why it took me so long to come to flower forms, then I exploded with them.” I kept driving and the roadside kept exploding with body shops and gas stations and rusty fences and billboards.

…“Remarkable you. Know your numbers. Get screened.” –Novant Health.

I pulled into the small parking lot of a produce/antique shed and gave up. I had driven beyond the 11-mile mark and had just crossed the Catawba River into Belmont. Here, at the corner of Hazeleen Avenue and Highway 29-74, I could see a man measuring his trunk (he was pondering a doghouse purchase), a stuffed rocking horse on a table, and feet on a billboard. I thought, “I found it! I found another work of ArtPop art!” I hadn’t. It turns out that Adams Outdoor Advertising also sponsored the billboard posting of the Scholastic Art and Writing Awards’ gold key work of two Gaston Day School students. Here was Kendall Carter’s award-winning display of two feet outlined in black and spotted with red paint—what appeared to be blood. It was dark. It was beautiful. As I stood there, staring, a woman in a hot pink dress asked, “Is that your billboard?” I said no, and explained to her what I was trying to accomplish.

“Maybe that’s Jesus on the cross and maybe that’s his feet,” mused the woman, who turned out to be Sherry. She oversees Belmont Produce.

Sherry let me browse her shop while she helped the man with the doghouses. I spotted a red kettle, a crazy-haired troll doll, the biggest sweet potatoes I have ever seen, and a cooler with sodas. There were also some cute candleholders. Before I left, Sherry told me how she believes that art on the billboards brings different people and different cultures in her direction. It certainly brought me in her direction. And though I didn’t achieve what I set out to do, I had taken an hour to explore territory that was unknown to me. I had paid more attention to the objects the city sticks toward the sky, whether we can call them works of art, or merely signs.