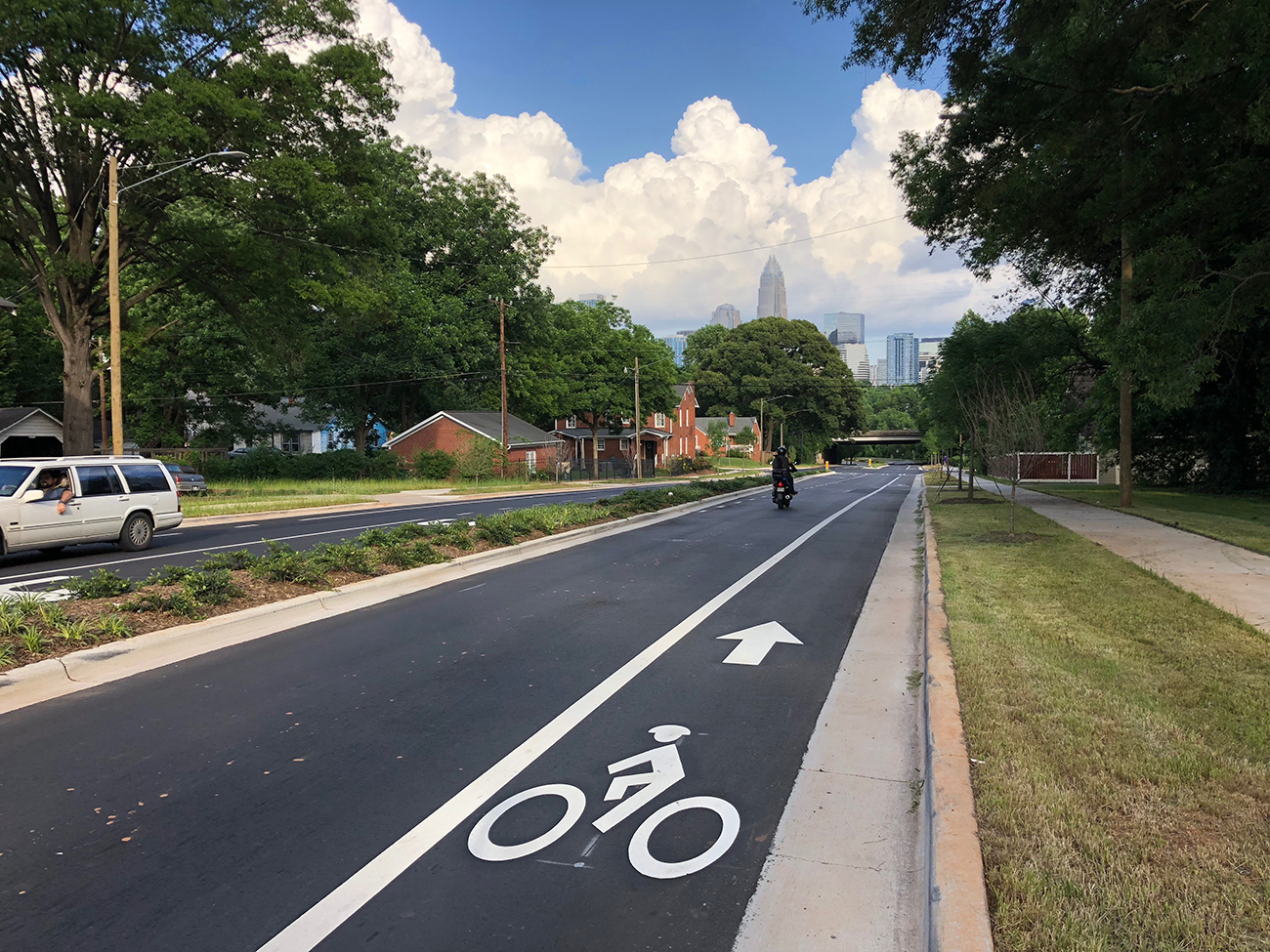 In late April, Charlotte took a big step toward becoming the sort of world-class urban city it so desires to be.

Mayor Vi Lyles and a coterie of other city leaders cut the ribbon on the Uptown Cycle Track — a designated bike lane running along 5th and 6th streets and connecting to the Little Sugar Creek Greenway and the Rail Trail.

Years in the making, this bike lane uses plastic bollards to physically separate bikes from cars, a step designed to make cycling more comfortable even amid congestion. For the first time, it makes commuting by bike a reasonable option for a wide swath of Charlotteans. 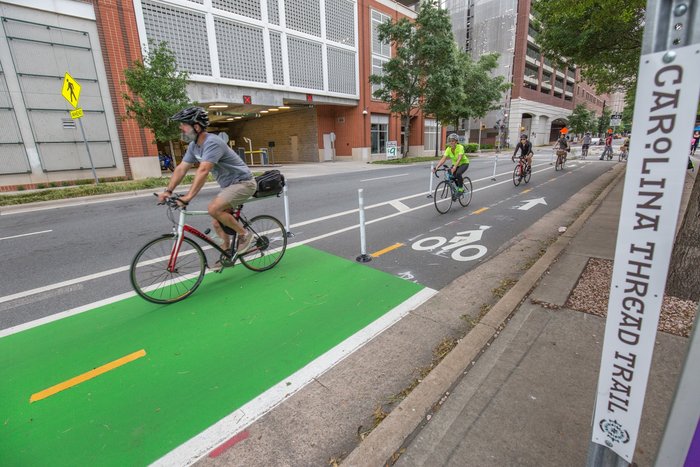 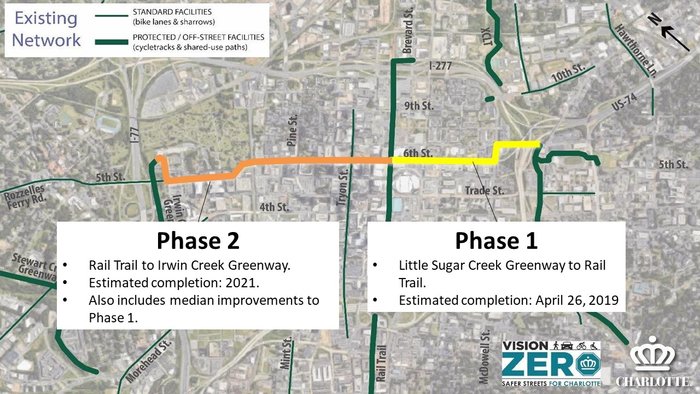 Phase 1 has been completed and is now open. Phase 2 is still expected to be done by 2021.

Just days after the grand opening, photos began popping up on social media of cars parking directly in the protected bike lane — effectively blocking cyclists from using it.

It’s a common enough problem that the Charlotte-Mecklenburg Police Department has briefed their officers on the issue and how to handle it.

“Because the bike lanes are new, CMPD is still working to educate the community,” CMPD spokeswoman Melissa Treadaway told the Agenda. “Our officers are meeting with community and business groups to talk about the bike lanes. If they see an illegally parked car, they try to locate and educate the owner. At this time, we have not begun issuing citations.

For urbanists, this encapsulates a larger Charlotte issue. This is why we can’t have nice things.

Despite all of its attempts to be more pedestrian-friendly, Charlotte remains dominated by the automobile. This situation is just the latest ugly reminder.

But there are plenty of others: Uptown’s new towers are being built with monstrous parking garages. The city spent months debating whether to allow dockless bikes and scooters to operate in Charlotte. CATS can’t figure out how to get effective mass transit up to the Lake Norman area.

And of course, the bike lane issue is a larger problem, too. Cars park in striped bike lanes all over town. This one is just more striking because it’s supposed to be physically blocked off from vehicle traffic.

“It’s a long-standing problem affecting bike lanes all over the city,” said Shannon Binns, executive director of Sustain Charlotte. “It’s a major hurdle to making our city safer for people on bikes and something we must change. And it’s all part of our car-centric culture that prioritizes cars over every other mode of transportation.” 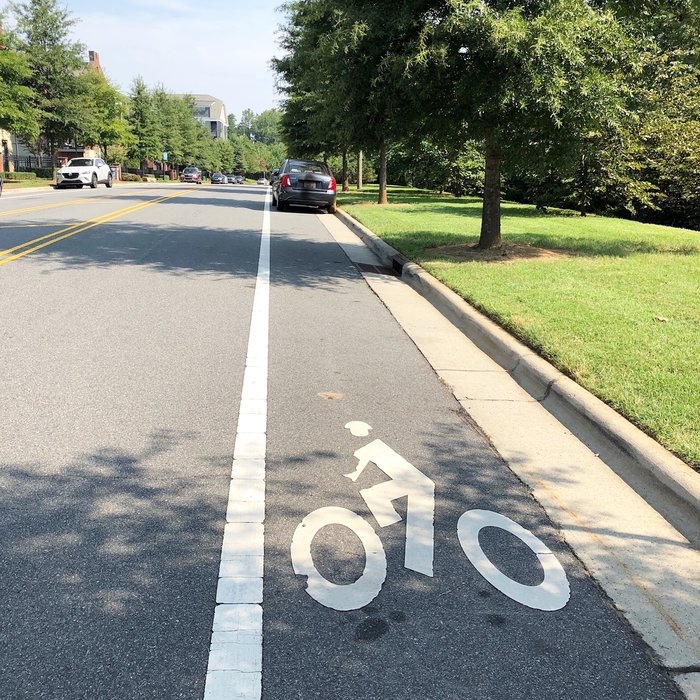 Luckily, the City Council is on the case.

For now, they’re treating this as an education issue. Most Charlotteans don’t even realize that we have a protected bike lane, and some don’t even know what one is.

“Hopefully people will learn and get more accustomed to it,” said City Councilman Larken Egleston, whose district encompasses the bike lane. He said he actually spotted the red truck parked in the lane and stopped to talk to its owner.

Egleston said the council is in talks with Charlotte Department of Transportation to put in more bollards separating the lane from the rest of the street. As it is today, there’s room for a car to weave its way through and park there. Closing those gaps could keep cars where they’re supposed to be.
The city has also talked to the postmaster for the Charlotte area, who is going to inform mail carriers not to park in the bike lane.
“People are still getting used to it,” Egleston said. “We’d rather educate people than have to write tickets.”
Story Views:
SIGN UP
Join the 119,778 smart Charlotteans that receive our daily newsletter.
"It's good. I promise." - Emma 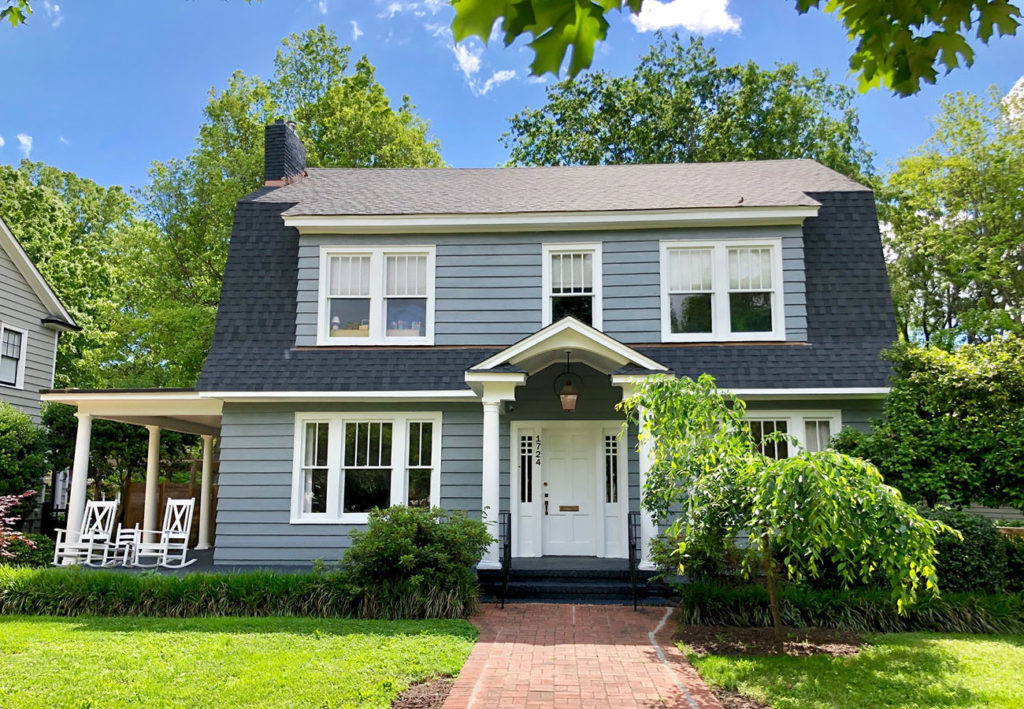