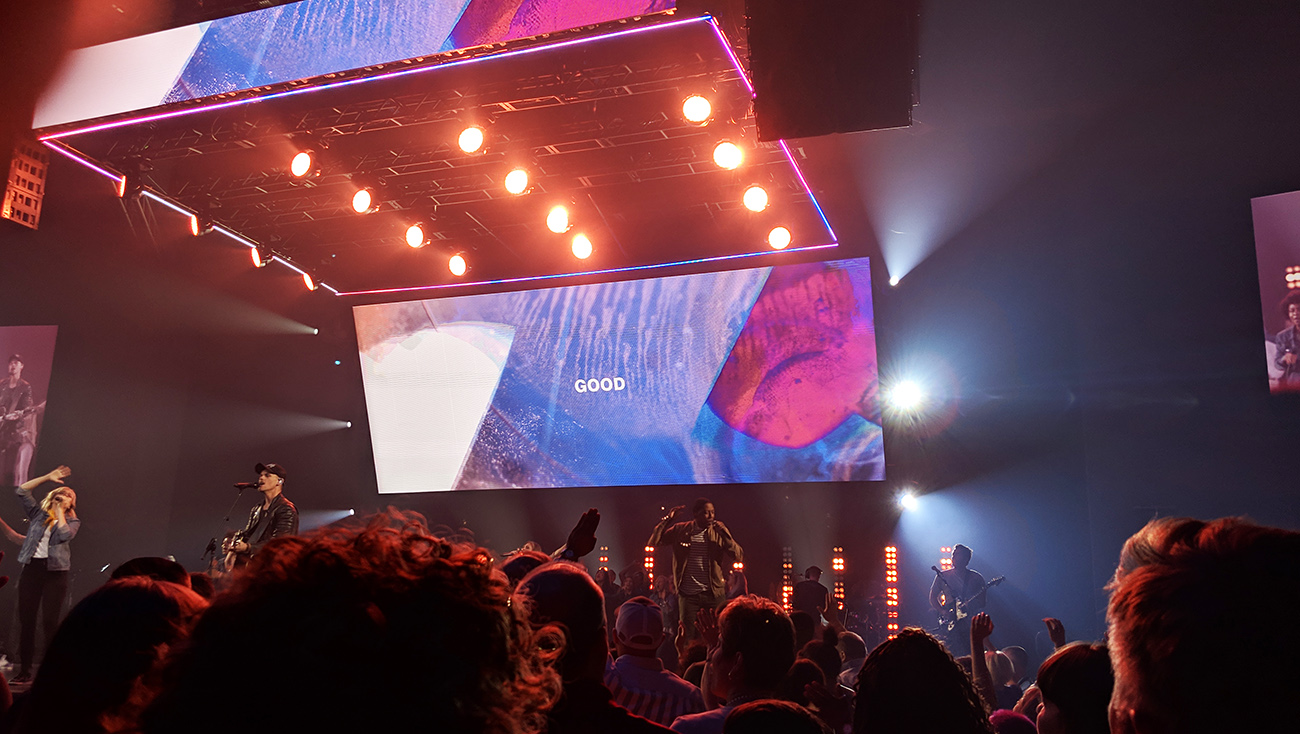 Their logo is everywhere, on hoodies, T-shirts, bumper stickers. I even spied it on a coffee mug in a Starbucks in SouthPark. I’m not talking about an athletic brand — I’m talking about Elevation Church.

With nine sites in the Charlotte region (18 country-wide), it’s hard to spend time in the Queen City without taking notice of Elevation.

When selecting one to visit, I chose Ballantyne — the location that broadcasts to the others and features Steven Furtick, the head of all sites.

Here are six takeaways from my visit. 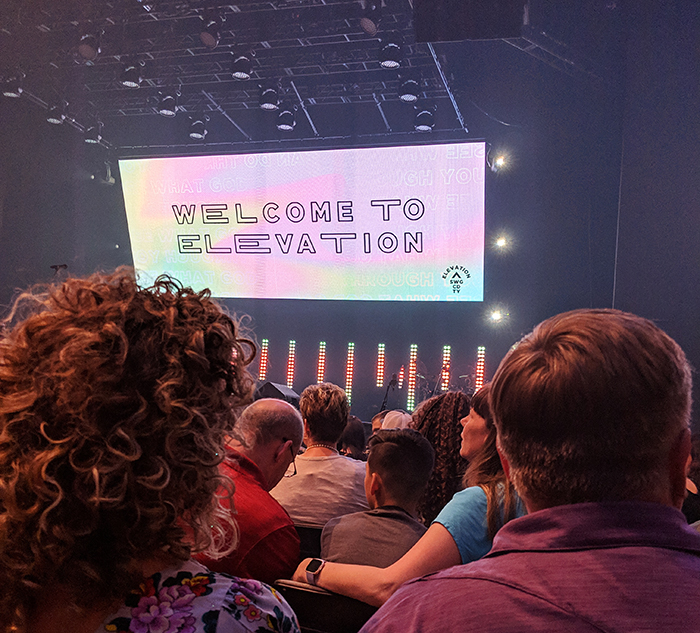 (1) Elevation volunteers are qualified to work at Disney World.

As me, my husband and my ten-month-old pulled in to the campus, we saw a sign requesting that we blink our headlights if we were first time visitors. So we flashed our lights and our car was guided to “VIP” parking up front.

A volunteer met us as we got out of the car with Mouseketeer cheer and chattered brightly while walking us in to the building.

After service, another volunteer who may have also been auditioning for a Colgate commercial, guided us to a welcome tent, all while making small talk.

Another volunteer said “I see you didn’t sign up for e-groups. Would you like me to check that box so you can meet people? I mean no pressure, but why not?!” How does one say no to all these smiling people?!

(2) Childcare at Elevation is serious business.

The kids’ area featured the only non-smiling person on staff, a security guard who thoroughly checked our diaper bag. The volunteer who gave us a tour informed us that every volunteer had received a background check and that they could send us pictures during service to let us know how our child was doing.

Every type of toy imaginable was present.

A cheery volunteer also informed me that their curriculum introduced babies to the concept of “Jesus as their friend.”

I sheepishly wondered if I was behind on his at-home curriculum which currently consists of R&B remixes to nursery rhymes like Baby Shark.

During service, we got a text asking if applesauce was OK, and by this point I assumed many parents attend Elevation just for the childcare.

(3) Getting there early is important, you know… like when you go to a club.

When we walked in, we were directed to stand in a line to wait for the doors to open. There were already roughly a hundred folks outside the doors, waiting. 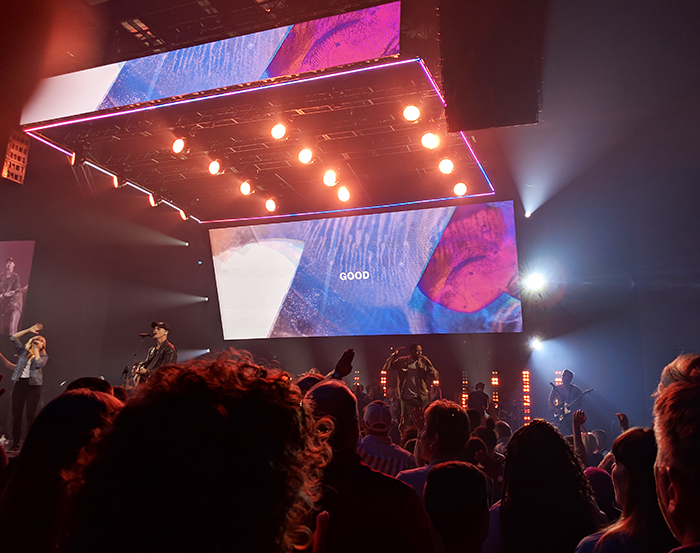 (4) The volume is set to REALLY HIGH.

Once we showed our IDs (OK just kidding) and they opened the doors, we were gleefully welcomed inside the sanctuary.

Right at the entrance was an ominous bowl of brand-new ear plugs a construction worker might wear on-site. As soon as the service began, I knew why.

If you’re looking for a Creed-like band concert feel, Elevation is for you. It is LOUD and folks are jamming. A few dozen people were even gathered around the front at the foot of the stage. No hymns or soulful gospel choirs here. 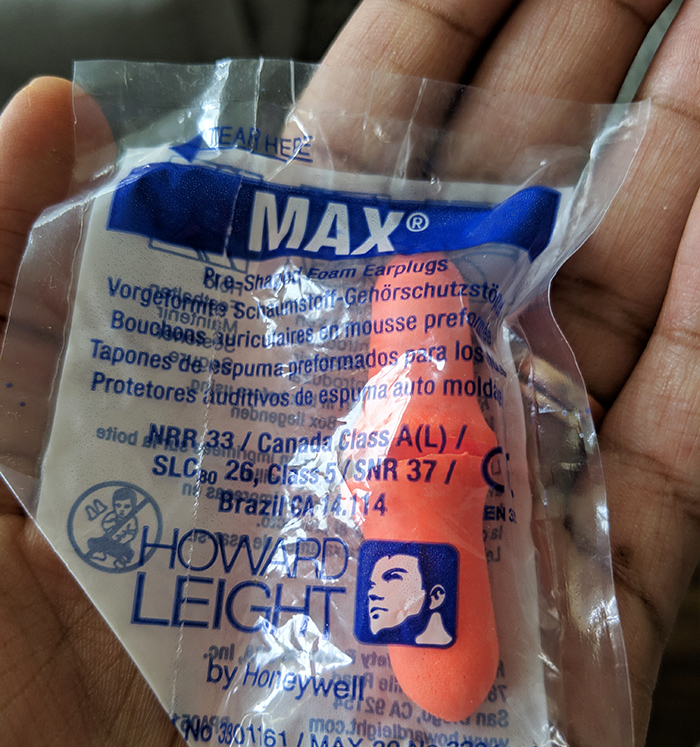 It isn’t just the lead singer in a leather jacket, strumming a guitar that gave me concert vibes. Before the service began, I could see the effects of a smoke machine trickling in.

The announcements were shared via a slick well-produced video. One key announcement this week was that the church had reached one million subscribers on YouTube.

Cameramen and women in all black inconspicuously guided their cameras throughout the audience to zoom in on congregants praying, singing and taking furious notes during the sermon. I aggressively avoided them all.

(6) If you wear your Sunday best, you are overdressed.

If the T-shirted volunteers didn’t make it clear, Pastor Furtick certainly did when he arrived on stage in a pink sweatshirt and sweatpants. The style is decidedly casual-chic.

During the music selections, I saw my husband nod in approval at one of the singers, clearly impressed. I whispered, “She can really sing right?” He responded, “She’s wearing the Air Jordan 1 Highs.” 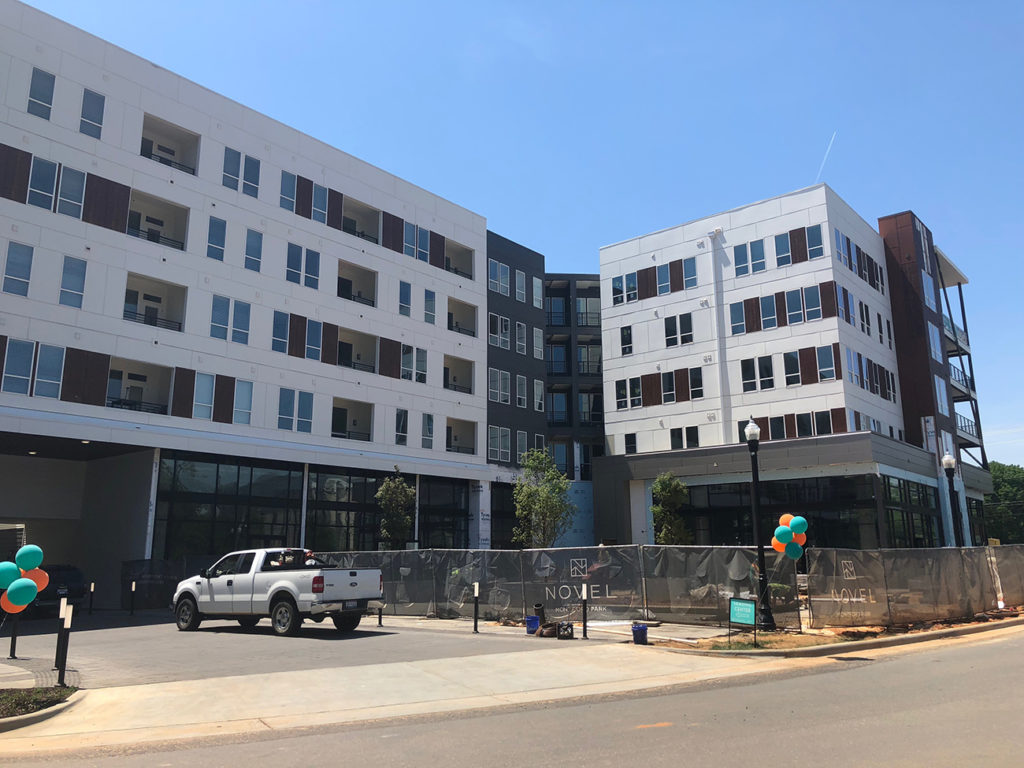