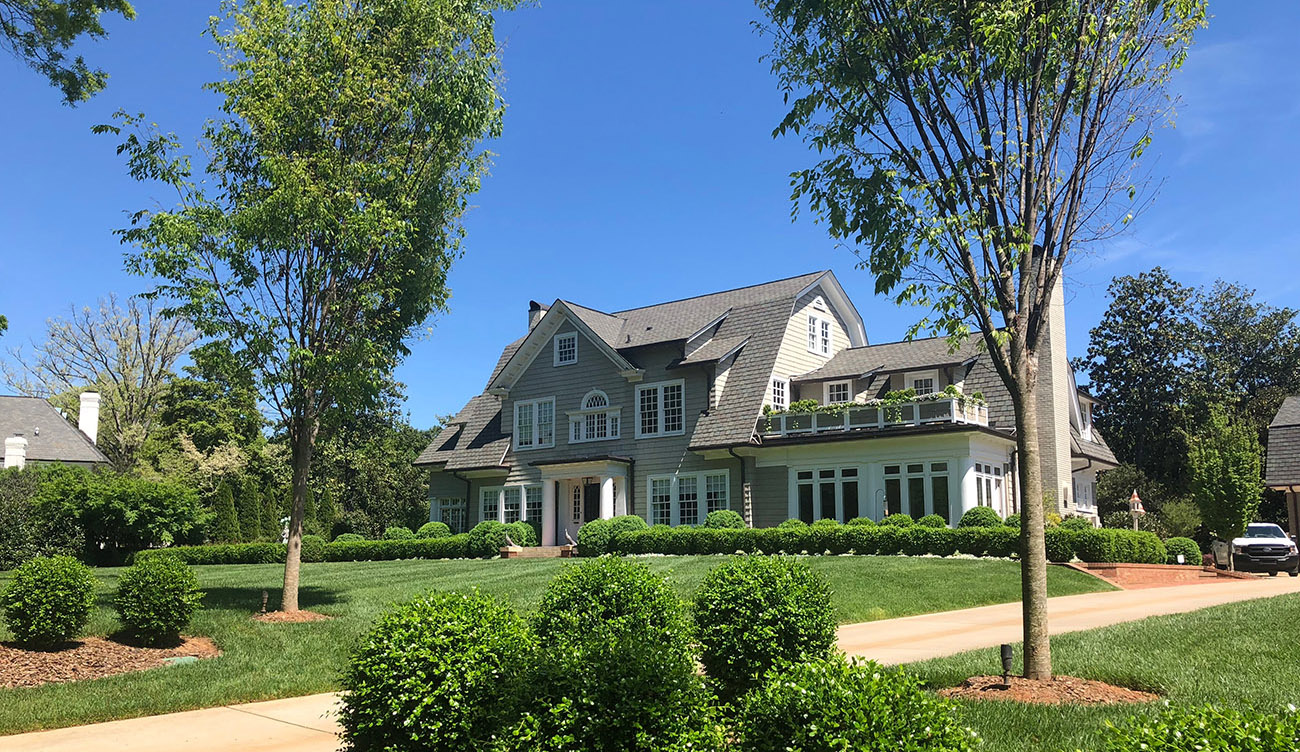 In an effort to identify our city’s most beautiful homes, I took a stroll through Myers Park with Garret Nelson, one of Charlotte’s top residential designers. I know what I think is pretty, but I wanted to know why.

In addition to owning his own design firm — Garrett P. Nelson Studio — Garrett is an Adjunct Professor at Queens University for Interior Architecture + Design and Design Review Chairman for the Historic Landmarks Commission — he knows homes.

Our Walk: We started at the Duke Mansion, looped down Hermitage to Queens Road and back around.

Background on the neighborhood: The footprint for Myers Park — including the tree-lined streets — was designed by architect John Nolen and his assistant Earle Sumner Draper in 1911 as one of the city’s first suburbs. It’s always been a pocket of wealth, and as people started realizing the value of their land, Charlotte’s old money elite started selling properties in Myers Park and building in Eastover, another pocket of wealth. 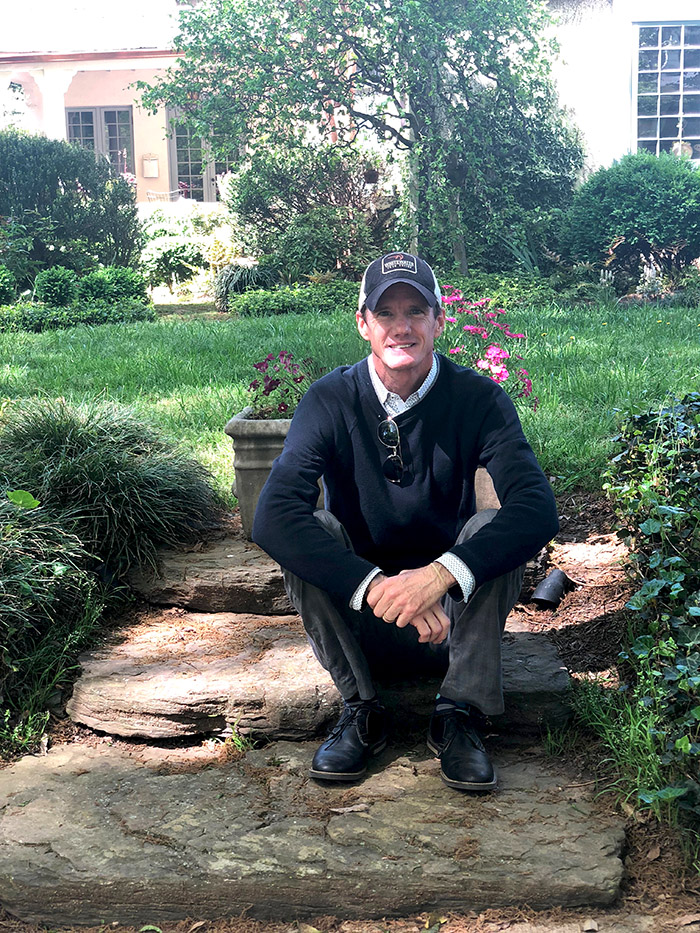 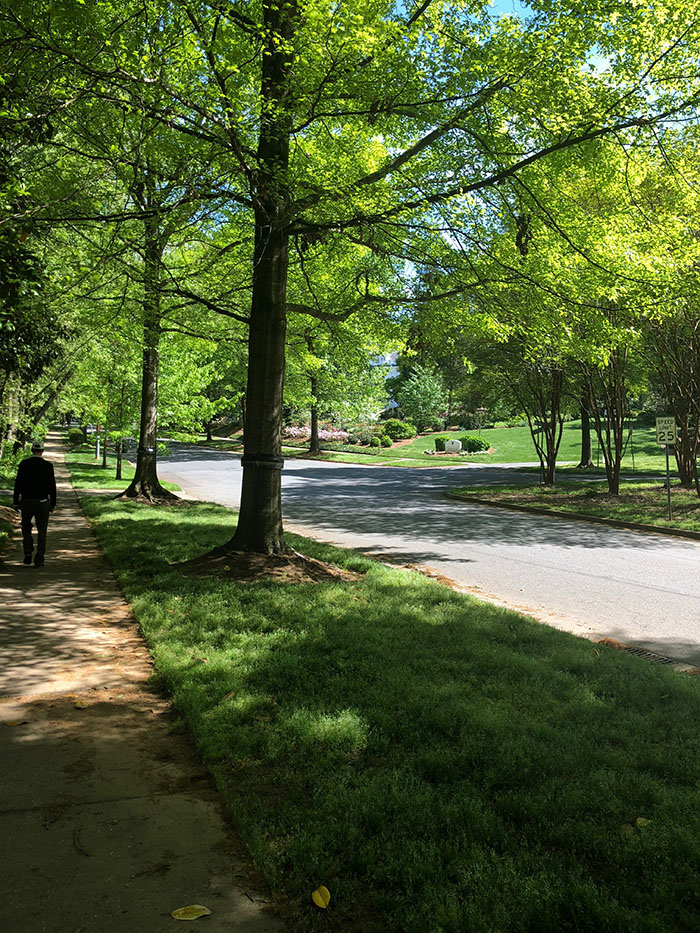 Here are my favorite houses from our tour.

Defining characteristics: Two sets of symmetrical chimneys; gabled (A-shape) book ends on either side of the center gable; four two-story narrow columns, two on each side of the entry; symmetrical windows.

Garrett’s take: Earle Sumner Draper, who helped design the Myers Park streetscape, did the landscaping design for this home. And what you see from the back is pretty similar to the original — you have formal landscaping, a serpentine driveway that circles a fountain and boxwoods lining the home. 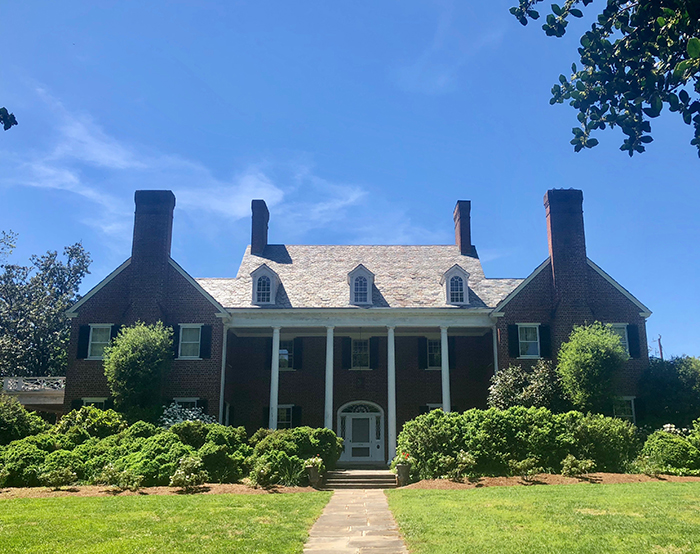 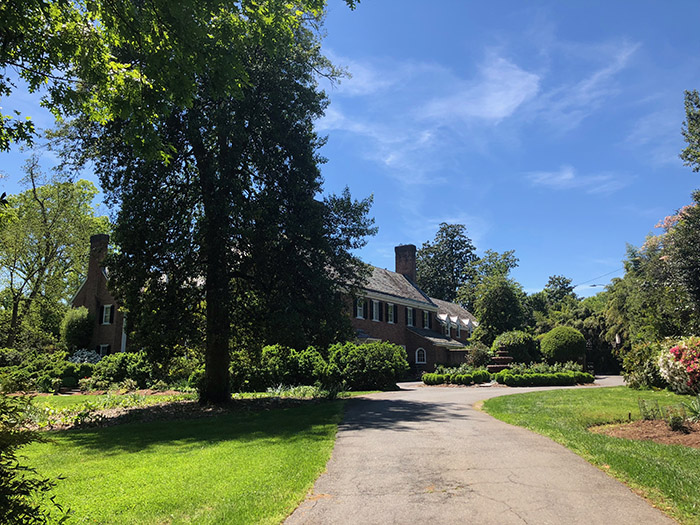 Back driveway/entry with formal gardens

Garrett’s take: The parapets (the piece jutting out between the columns and the rooftop) of the two single-story bookends and the center portico create one strong visual line spanning the front of the home. Again, you see a ton of symmetry — from the windows on each side of the entry to the copper downspouts — which is typical of turn-of-the-century design. 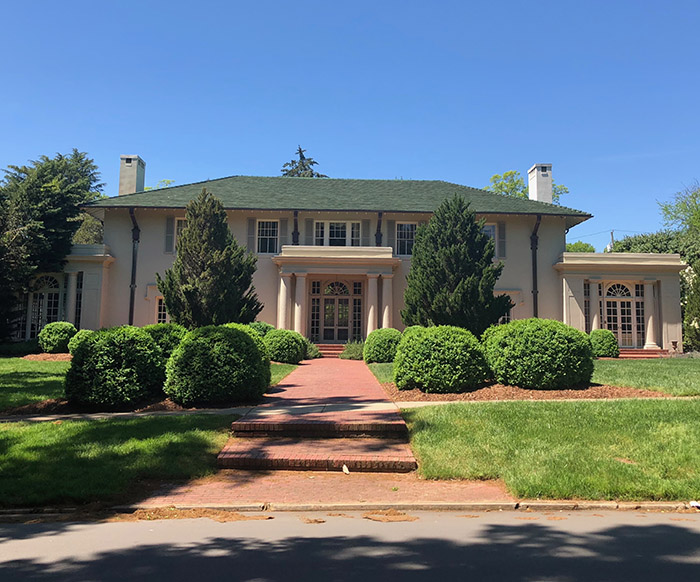 Garrett’s take: I was shocked to find out bungalows can be this big. I always pictured Dilworth-style homes, and thought the term had more to do with scale — I was wrong. Garrett told me the materials used, type of roof, and movement away from the tradition of symmetry, etc. are what makes a home a bungalow. 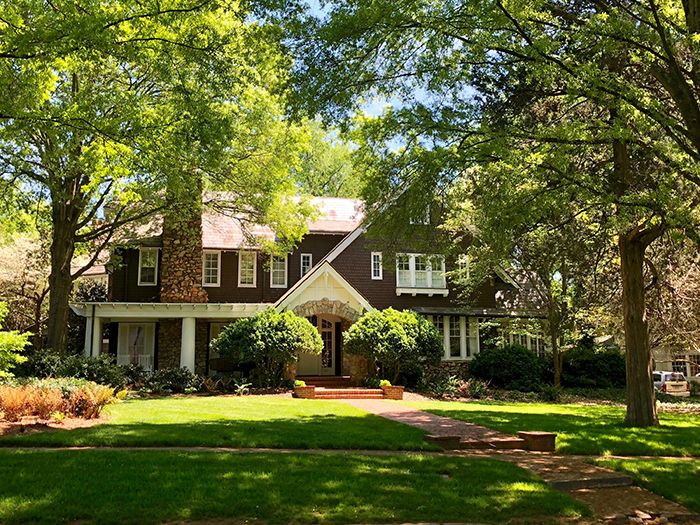 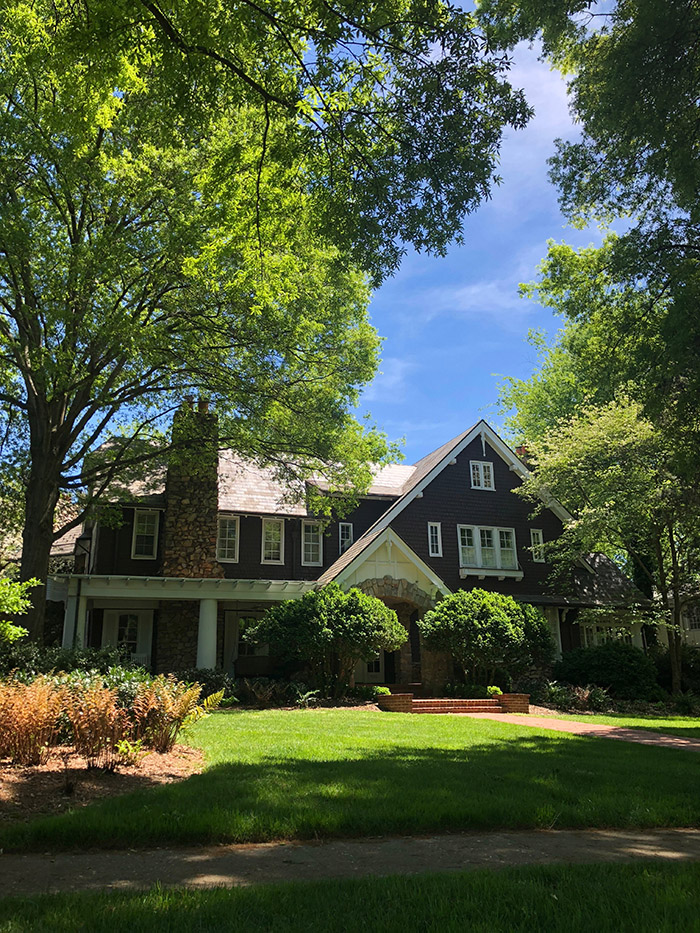 Defining characteristics: Garrett explained to me that Pursley/Dixon, as well as himself, tend to lean into eclectic design, which borrows from all types of styles to create something unique but still timeless. Garrett said he classifies this project as eclectic, but it also borrows some features you see used with a lot of homes in the Cotswold area.

“The prominent chimney design engages the pedestrian as you approach the site, a feature very common in Cotswold influenced designs,” he said, “along with the steep pitched cedar roof design, arched doorways and whitewashed brick veneer.” The flickering gas lanterns are also a nod to local architecture.

About Nolen Place: From the street, Nolen Place looks like a single-family home, but there are actually nine townhome units in this first phase — a second phase is being built beside the current site. The first phase is full, but they range from 2,900 to 3,900 square feet and sold around $1.5 million each.

“I will convey my emotions about the architecture solely as an admirer with a great appreciation,” Garrett said. “… I would consider this project to be, a work of art.” 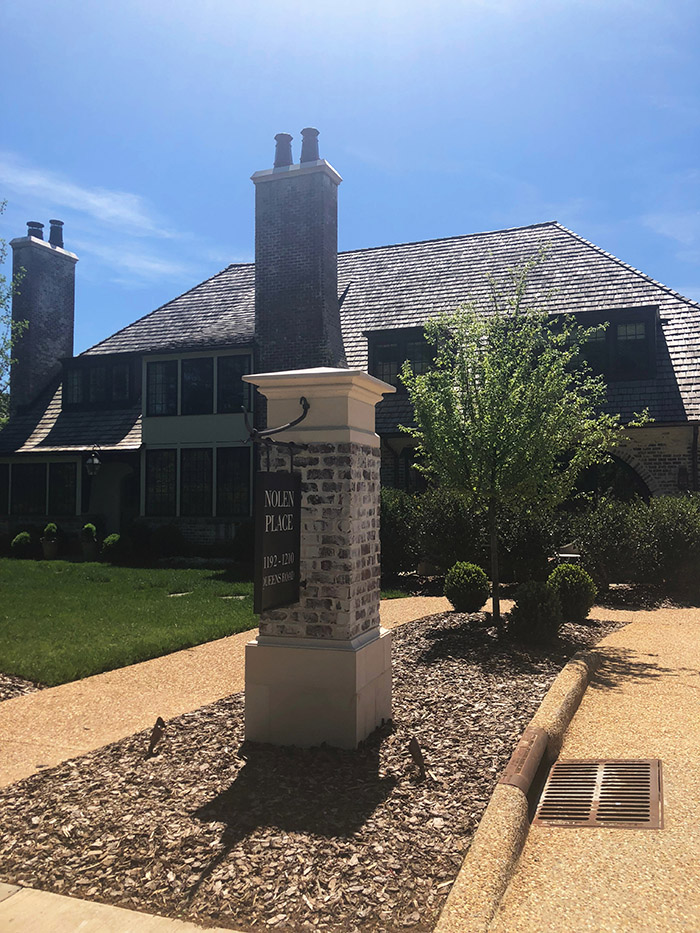 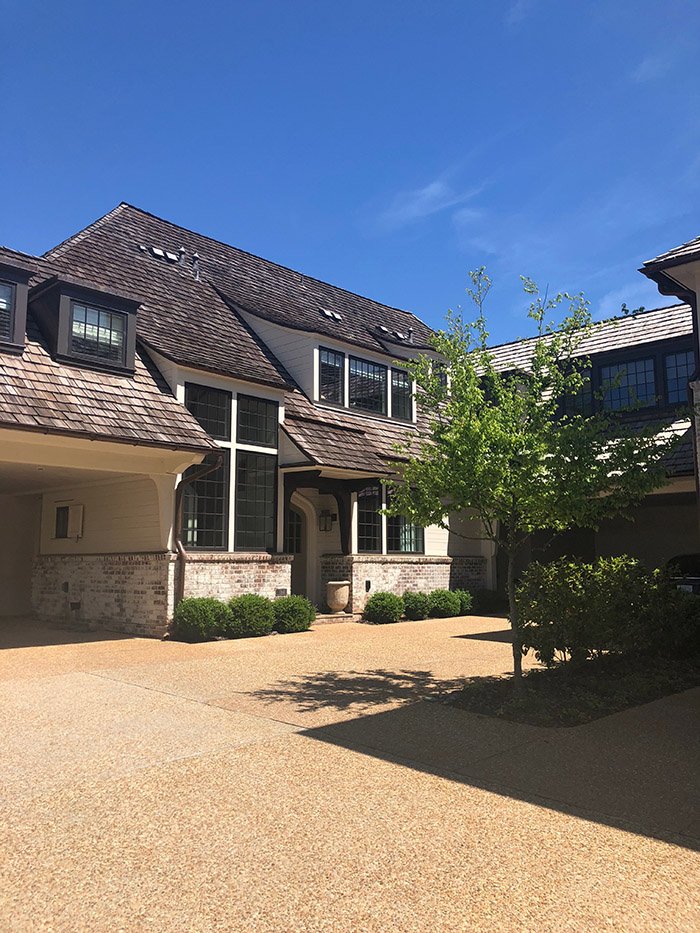 This is what the first unit (the one you can see from the street) looks like on the backside. I love the mixture of materials, the varied rooflines, asymmetrical windows and all of the other details that make this property an example of luxury multi-family living.

Garrett’s take: “I love this home with its whimsical street presence,” he said. There’s nothing symmetrical about this home, and it’s so interesting that it was built around the same time as more traditional colonial styles (like the first house in this list). 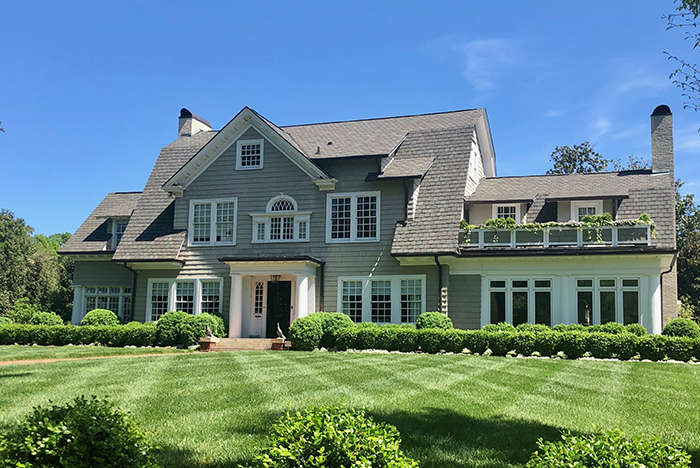 What Garrett says: “It is difficult to convey the intent and thought process of individual architects, but my personal design intent is to create homes that enable one to stop and “pause” for a moment, and this home absolutely does that for me,” Garrett said. “I love this home as well, especially the way it has a rambling English country home feel. Its presence along the street edge is so delicately designed and scaled.” 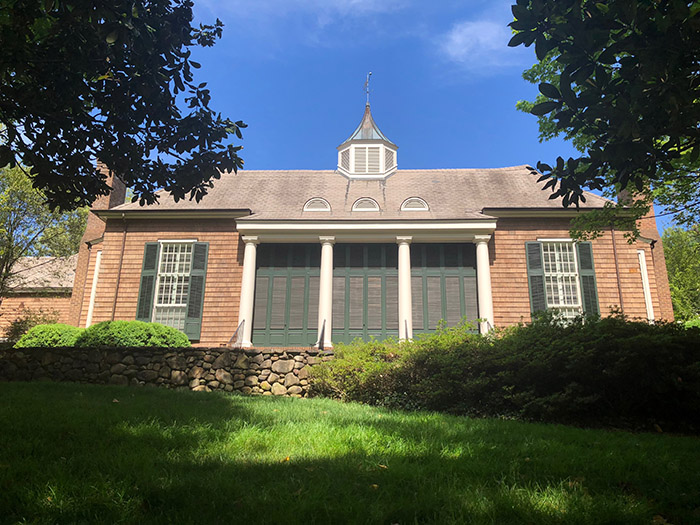 The shutters in the middle open to bring true indoor-outdoor living to life. Garrett said he *thinks* the front is actually a guest house and the main house is behind (still connected). It’s so interesting to me that the main entry isn’t front and center, you have to go around to the side — I love it.

What Garrett says: “This Martin Boyer Tudor Revival jewel is one of my favorite homes in Charlotte,” he said, “not only for its architecture, but I love its scale as well as its presence within the streetscape of Hermitage Court’s tree lined street and heavily landscaped center median.” Garrett also noted the way the garden works with the street as well as the home, which is an interesting way to think about architecture. He said “it’s various colors and textures creates a warm foreground to the understated elevation of the home.” 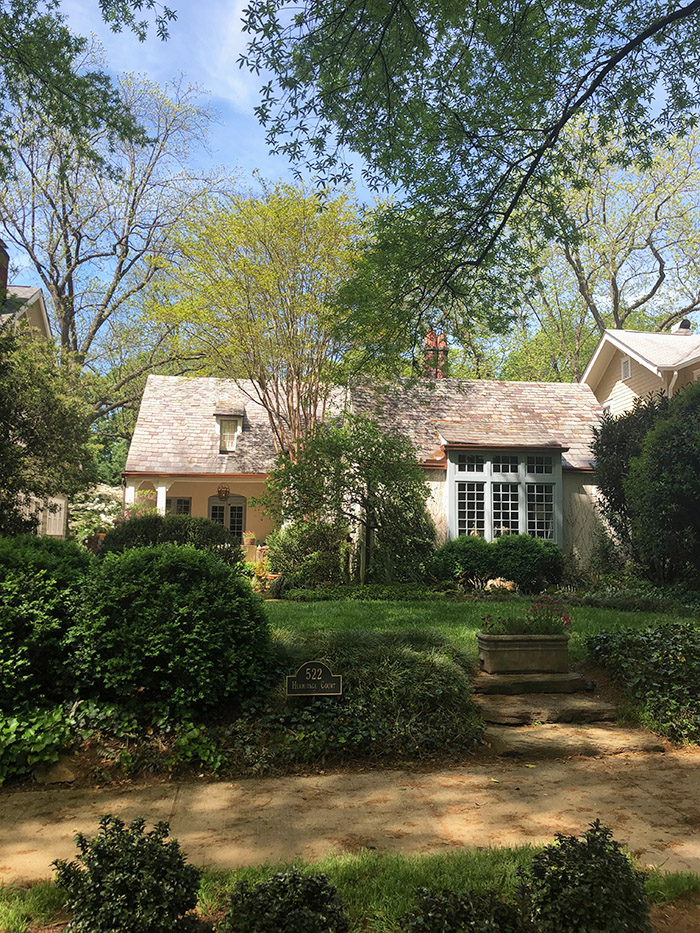 This house is perfect. It’s charming and whimsical, and I love the blue window frames. 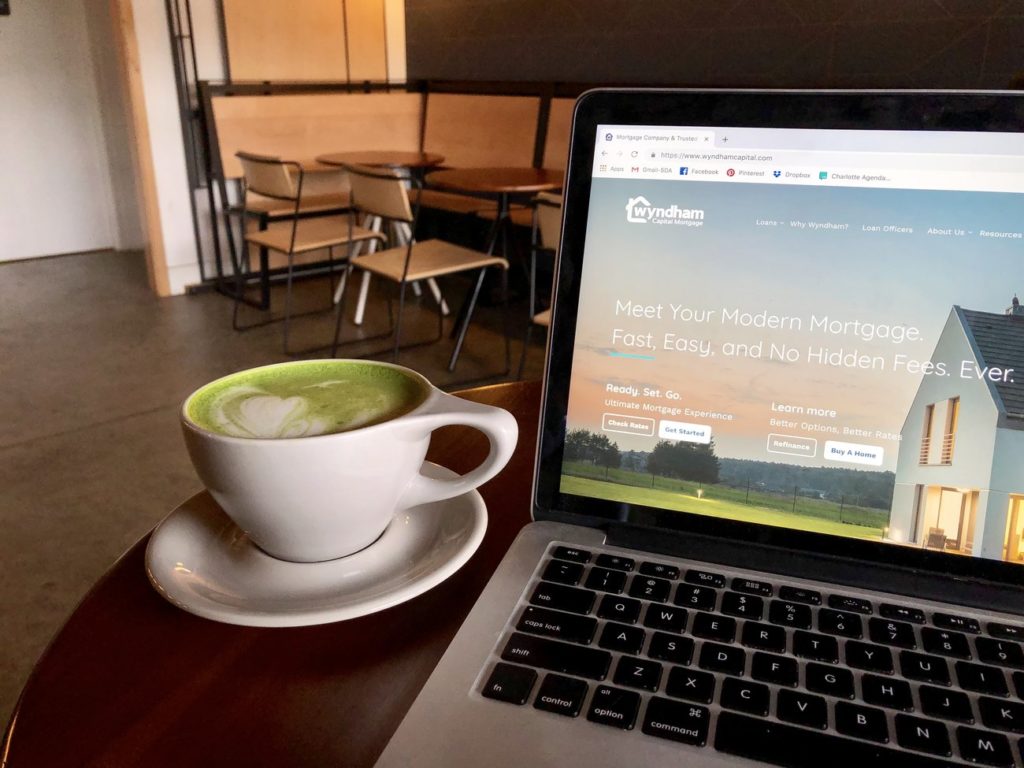 All the complicated stuff about your mortgage, explained

by Samantha Alexander
Most Read
1
Kid Cashew on East Boulevard sets its opening for mid-January
2
Hello Friday. Charlotte Recycling Plant.
3
Starbucks on East Blvd will start to serve wine after renovations
4
Bleu Barn Bistro takes food from farm to food truck
5
May I smell your beer? 26 days without drinking
Most Recent Open Jobs