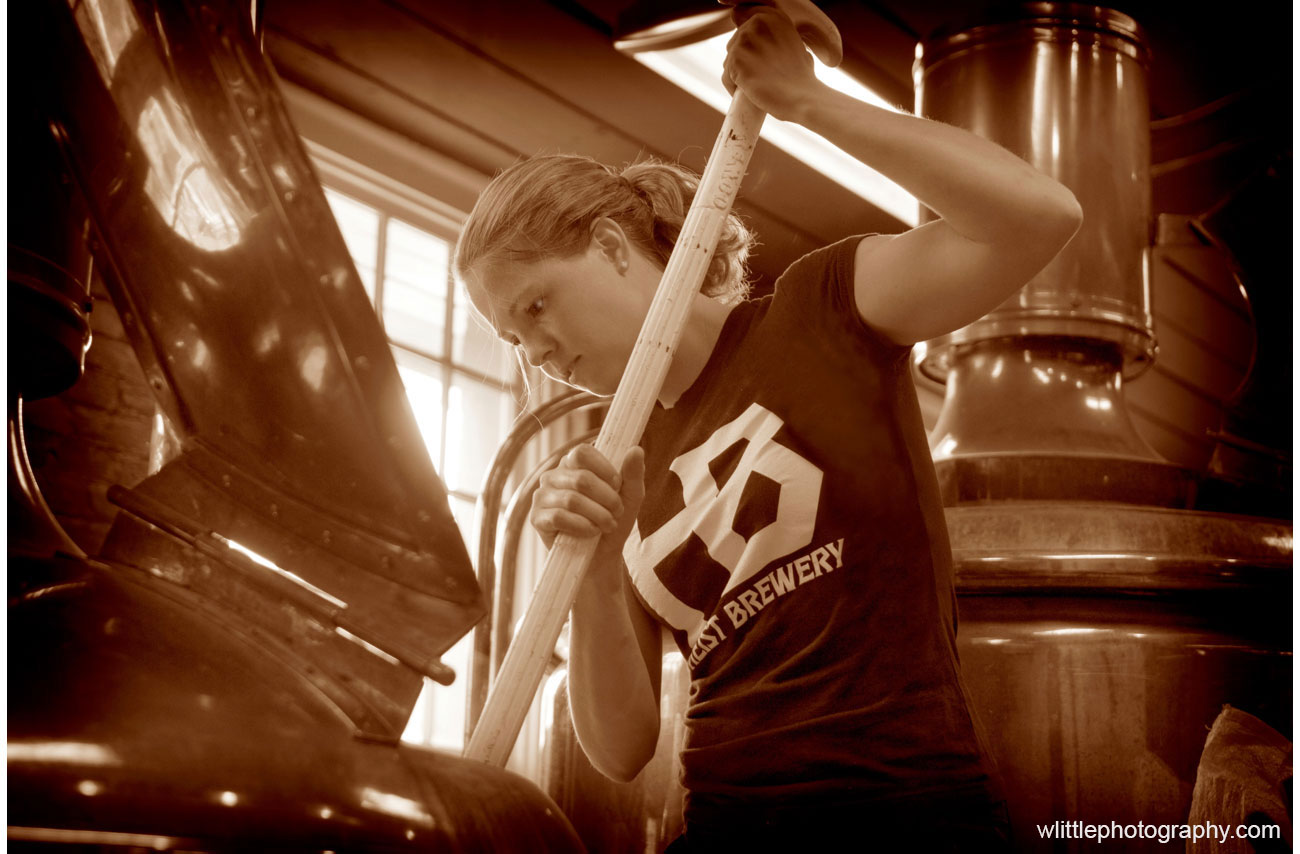 Alexa Long of Heist Brewery isn’t your typical Charlotte brewer. In an industry dominated by males, she’s pursuing her dream career of creating and brewing beer as the only female brewer in Charlotte. I asked Alexa a few questions to get her take on what it’s like to set such a precedent.

When and how did you first gain an interest in brewing?

My interest in brewing stemmed from my passion for the craft beer community. I frequented local craft establishments like Flying Saucer and Common Market while working at The Liberty and learned as much as I could about the different styles of beer. Finally after much “market research,” I decided to further the exploration of beer through home brewing. My Dad used to homebrew about 25 years ago and he donated all of his used supplies (some of which are still used today). At the time (four years ago), I had no idea this fun hobby would turn into my dream job.

Tell us about your journey of becoming a brewer. How did you get to where you are today?

In addition to my home brewing background, I also worked as an apprentice for a week at Joules Brewery in the UK where I brewed on an automated 30 bbl system and focused a lot on quality control and quality assurance in their lab. Locally, I occasionally volunteered at Unknown Brewing under Brad Shell and Dave Scott. Most recently, I managed the local homebrew store, Beer and Wine Hobbies. During this time, I learned a ton about recipe development and brewing techniques. I was also able to network with local breweries and, ultimately, come across the position at Heist Brewery that I have today. My resume was basically a 6-pack of homebrew, a stint of volunteer experience, and lots of passion. How does it feel to be the first female brewer in Charlotte? Do you feel like you’re paving the way for other female brewers in the area?

It feels awesome! If I’m inspiring in any way, that makes me happy. That could mean females breaking the stereotype that brewing is a “man’s world.” That could also mean inspiring others to follow their dreams and turn a passion into a career; male or female, brewing or otherwise.

We just released a Blood Orange Saison called “Salerno.” It’s super juicy with a great balance of tartness and sweetness that is dangerously drinkable at 7.9% ABV. I would say that I tend to both drink and brew seasonally, so I’m really into that right now. Grand Optimus (Double IPA) and Cataclysm (Russian Imperial Stout) are both amazing beers with great complexity, balance, and drinkability. They also cater to “beer-nerds” stylistically and have given us good notoriety recently. Both beers require long brew days, but they are worth it! By now I have pretty much brewed all of my homebrew recipes at Heist. We do about 10 small batches per month, so I went through those recipes pretty quickly. “Shepard of Fire” is a Chili-Chocolate Porter that was originally a homebrew recipe and was brewed on the big system this winter. The recent version had a little more heat than the original, but both were solid beers. Where do you see the Charlotte beer community 5 years from now?
Oh geez. Breweries and craft beer bars are popping up left and right. I think the craft beer buzz is not just a fad, but it’s hopefully here to stay. I think there will be at least 10 more breweries in Charlotte 5 years from now. I don’t know what the “magic number” is before the “bubble bursts,” but I do think one exists. We’re not there yet. There is still room for more breweries; I just don’t think there is room for bad beer anymore. While certain breweries are expanding, others may end up closing their doors. Aside from making good beer, a defined vision and uniqueness are key. Which beer are you most excited to brew this spring?

We do a series called “Flight School” where we release a flight of 5 different experimental, seasonal brews the last Thursday of every month. It allows us to experiment with different ingredients and brewing techniques and it allows the consumer to try new things and develop their palate. It’s a win-win! This month is called the “Lupulin Lounge” and it’s a flight of single-hop beers using new hops that we’ve never used before. As a hop-head, I am excited to discover the flavor profile of the new hops. We’ll also be doing a whole flight of different styles brewed with different fruits this summer. It’s going to be awesome!

What inspires your beer recipes? How do you decide the ingredients that will be included in your beers?

I’m mostly inspired by other great beers. I’ll taste something and try to pick out the hops or specialty grains in the beer. Sometimes I like the idea of a particular beer, but may have a different idea for execution that I’d like to try out. I’m also inspired by food and drinks. A few years ago I tried my first Chai Latte and immediately wanted to brew a Chai Milk Stout based on the latte. “Cocktail Hour” was a series as part of “Flight School” that included five beers inspired by cocktails. The Amaretto Sour Berliner Weisse and the White Russian Milk Stout were two of my personal favorites. I’m always interested in what’s available seasonally and locally as well. If there is a particular produce or herb available locally, I’d love to experiment with it.

Connect with Alexa and Heist Brewery 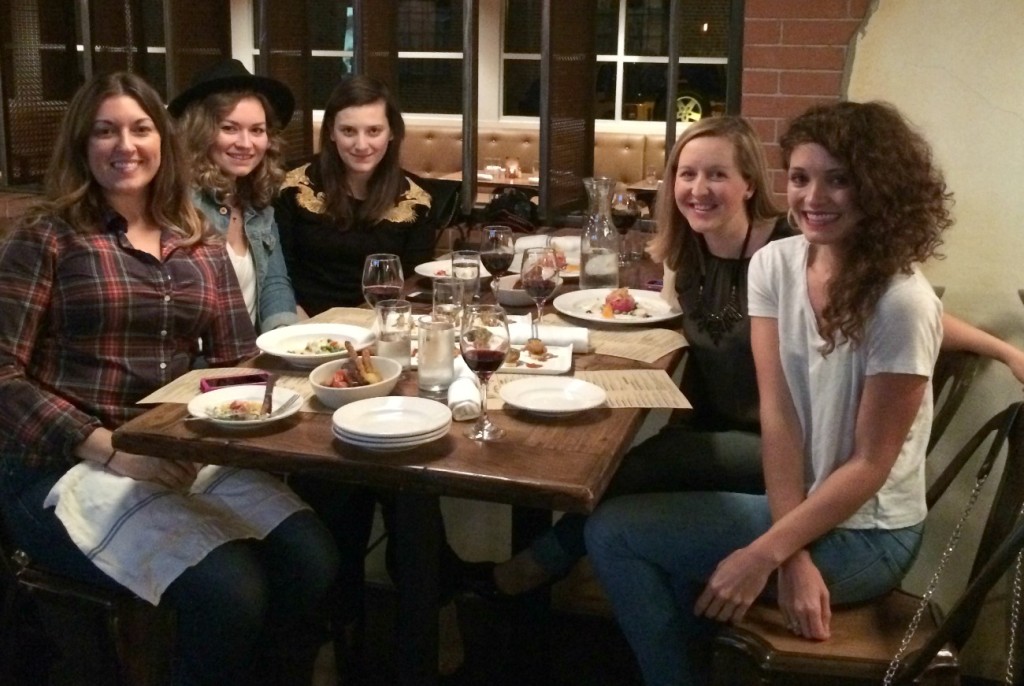 How to make friends in Charlotte like a grown up