Eight+Sand, the new concept from the teams behind Inizio Pizza and Not Just Coffee, soft opens today — see full menu 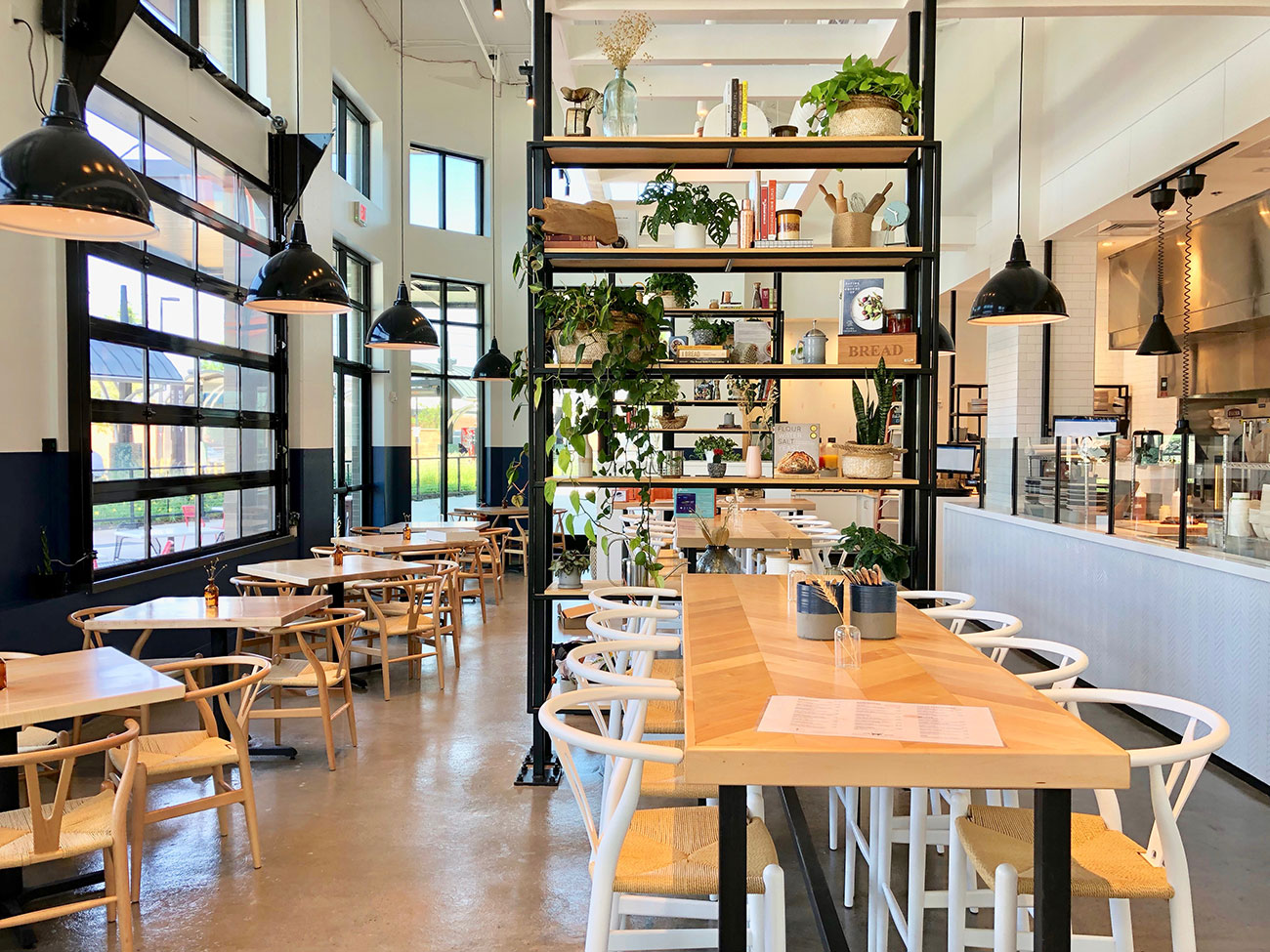 Eight+Sand, a bakery, restaurant, cafe and bar from the owners of Inizio Pizza and Not Just Coffee, soft opens today at 7 a.m.

It’s located at 135 New Bern Street on the ground floor of the new Bradham apartments right on the light rail.

Three powerful names in Charlotte food and drink are behind the venture — Inizio Pizza owner Grant Arons and Not Just Coffee co-owners James and Miracle Yoder. That’s a hell of a dream team. 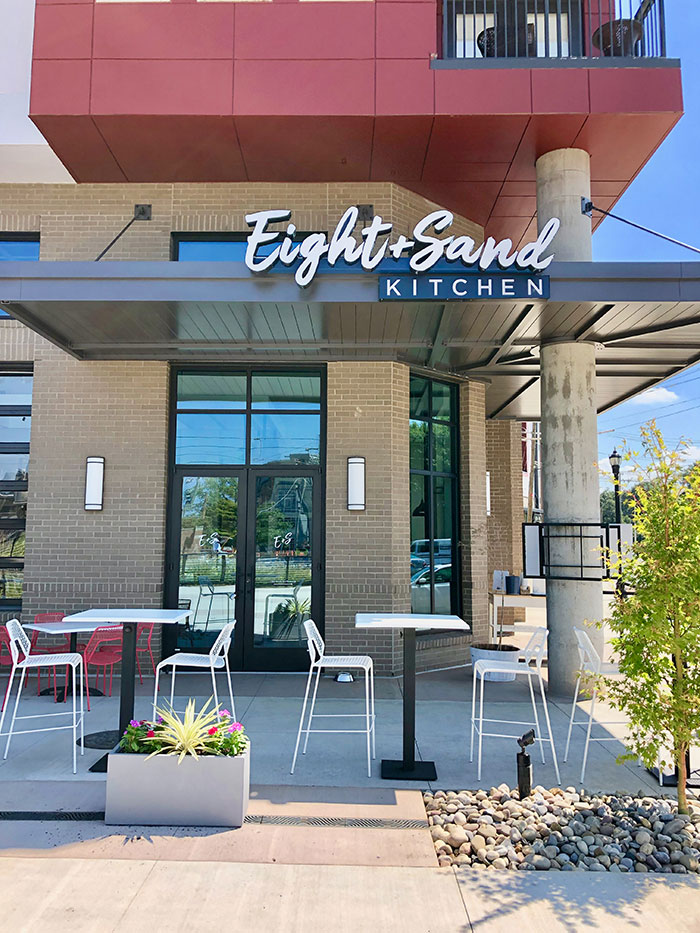 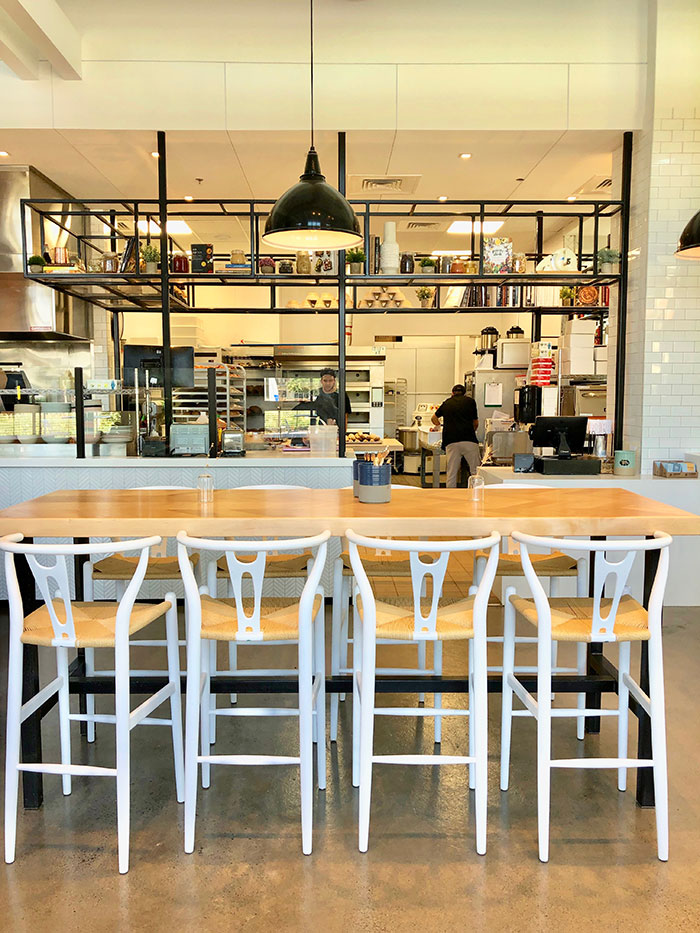 “Eight and sands,” a bygone saying from historic railroad days, is a nod to Charlotte’s light rail. Eight refers to the speed of the train in its eighth gear, and sand was thrown on the tracks to create safe friction.

“Train crews would use the term as a well wishes of sorts for a safe and speedy journey,” said Arons.

The 3,500-square-foot space with 20-foot ceilings and large roll-up garage doors seats 78 inside and another 60 outside on the patio.

The design has a Scandinavian-style modern minimalist aesthetic and features local Rosewood Co. custom tables and stoneware from The Little Studio. Rachel Martin Design desiged subtle custom produce graphics on feature walls and in the bathroom.

Customer flow is set up so you order at the register, take a number and then find a seat. It’s not quite full-service or true fast-casual but falls somewhere in between — they’ll have servers tending to drinks and bussing tables. 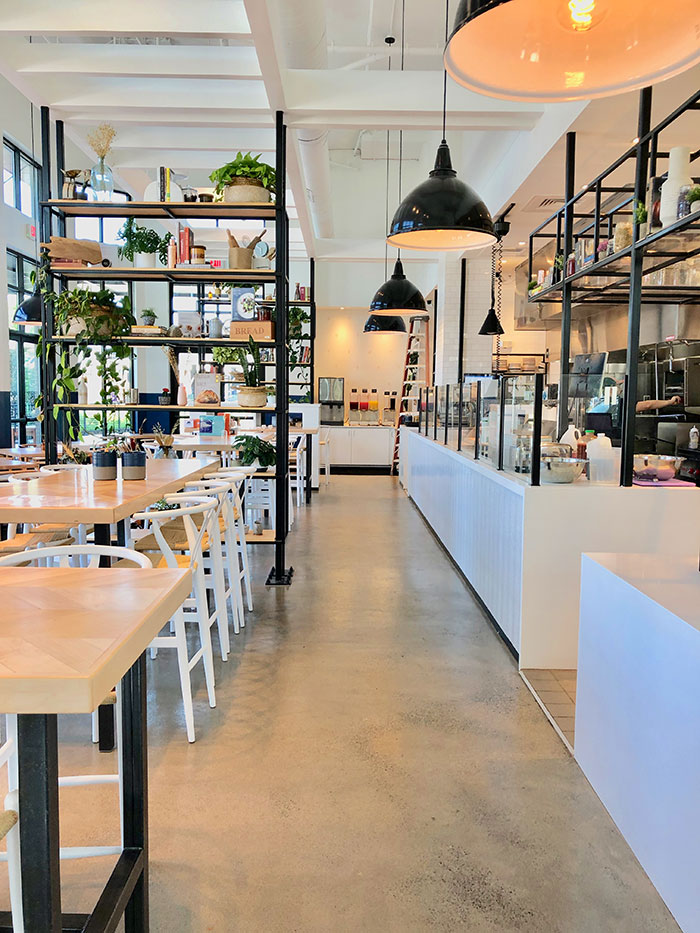 The cafe and bar will deliver the same quality you’ve come to know at Not Just Coffee without being an exact replica.

Yoder says they’ll still be working with Counter Culture coffee but are using different blends at Eight+Sand. They’ve got a signature oat milk latte and nitro cold brew on draft and all syrups are made in house.

Vivien Ross is leading the bar with a menu of light, effervescent cocktails (including sangria and Negroni on tap), five beers on tap and a selection of carefully curated spirits and wine. 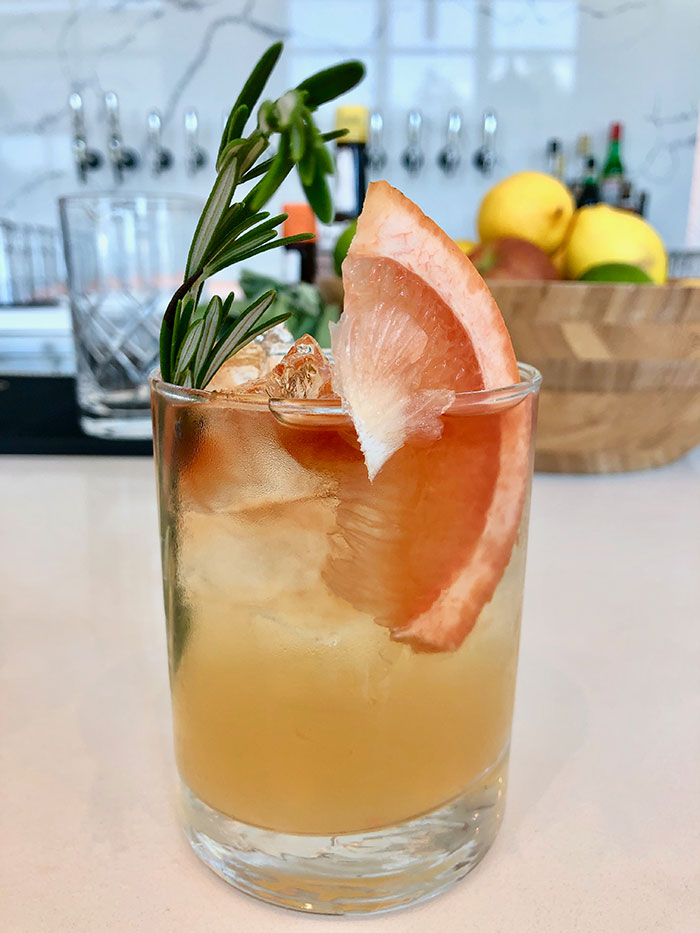 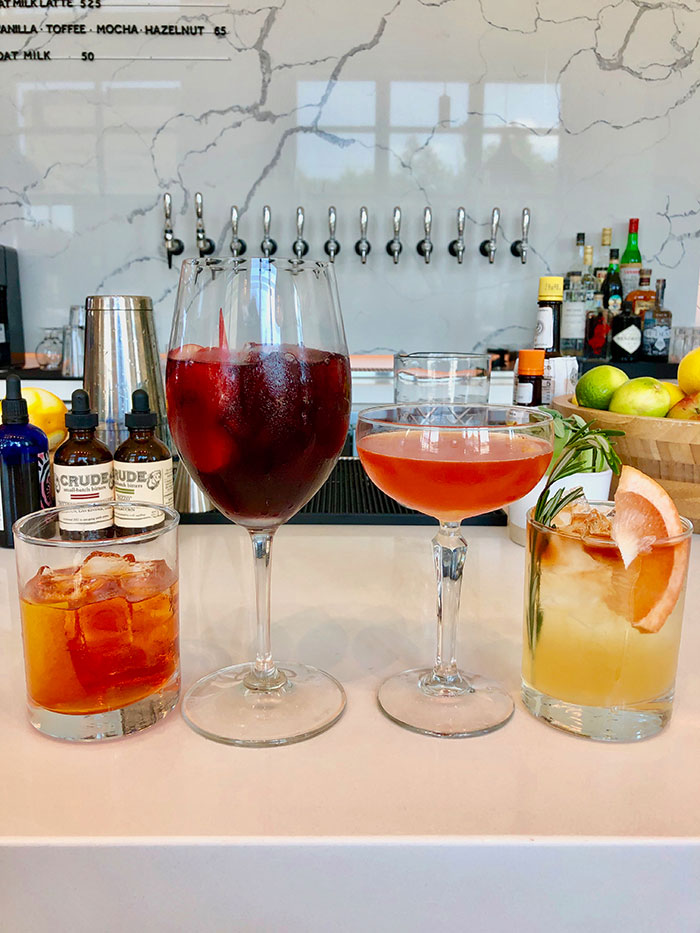 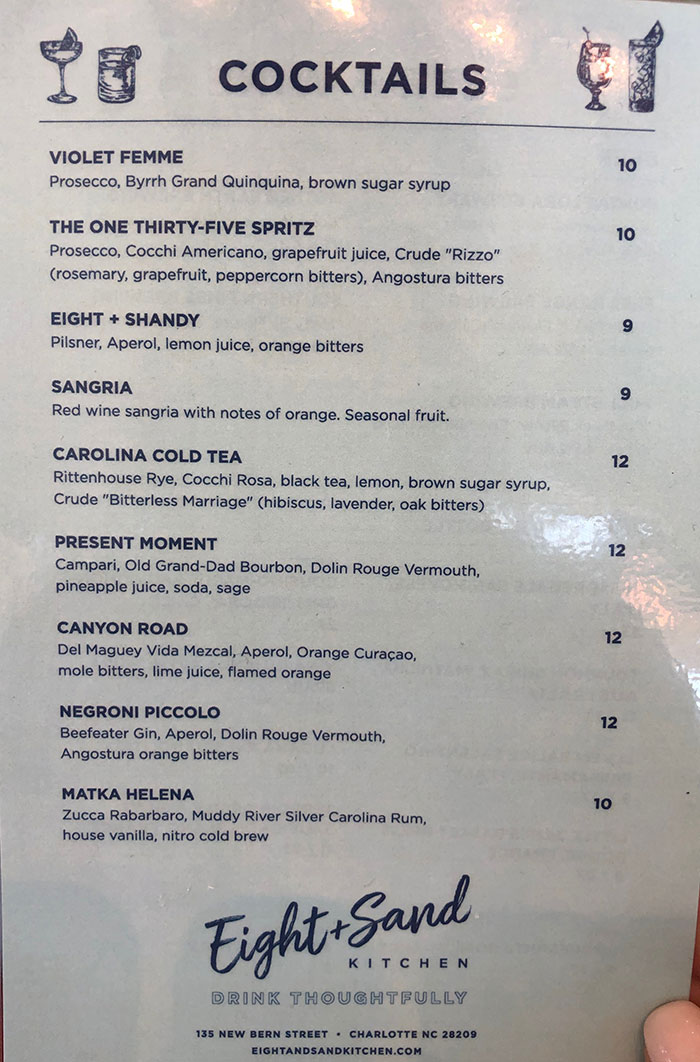 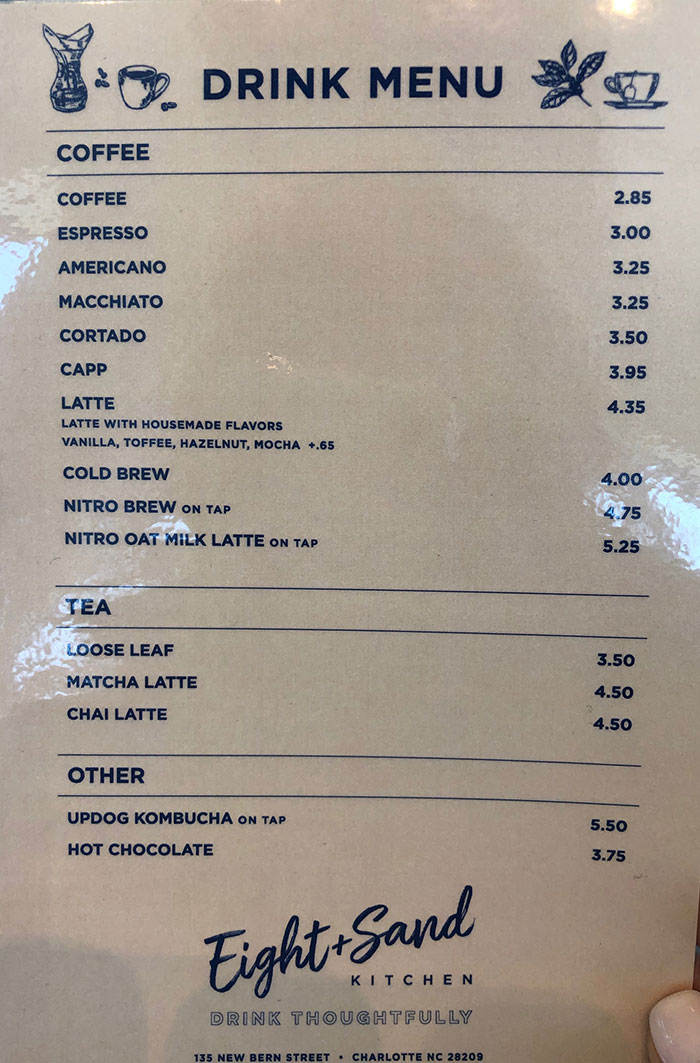 The foundation of the food menu is built on housemade breads prepared with locally sourced organic flour, natural leaven and heritage grains milled in house.

Executive chef Peter Falcon came over from Inizio. Almost everything in the kitchen (from the jams to the breads) is made from scratch, and anything that isn’t is sourced locally. 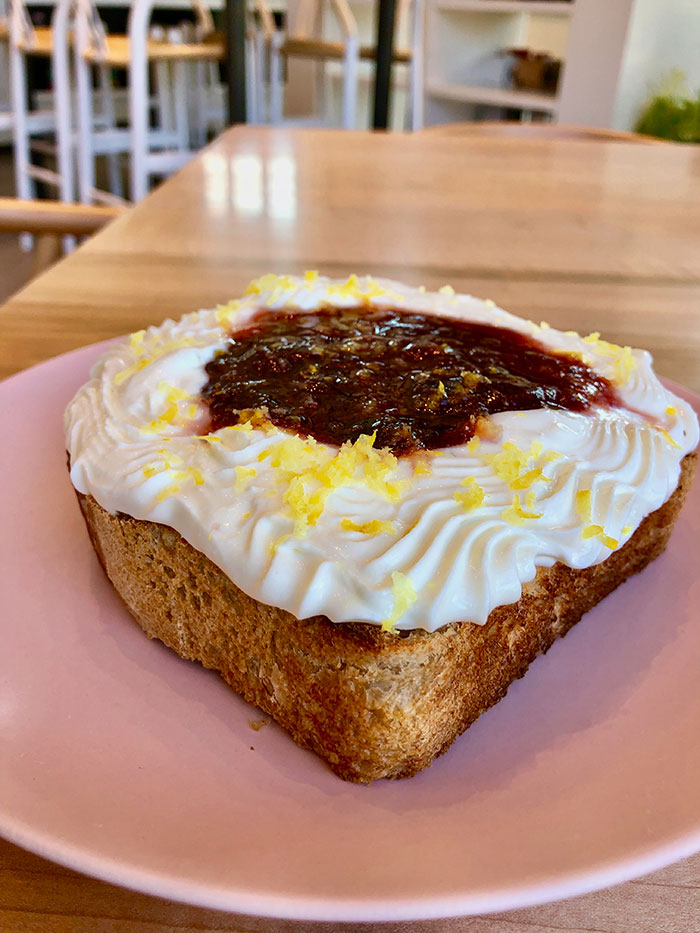 Sandwiches are the main attraction for lunch and dinner. Favorites include: 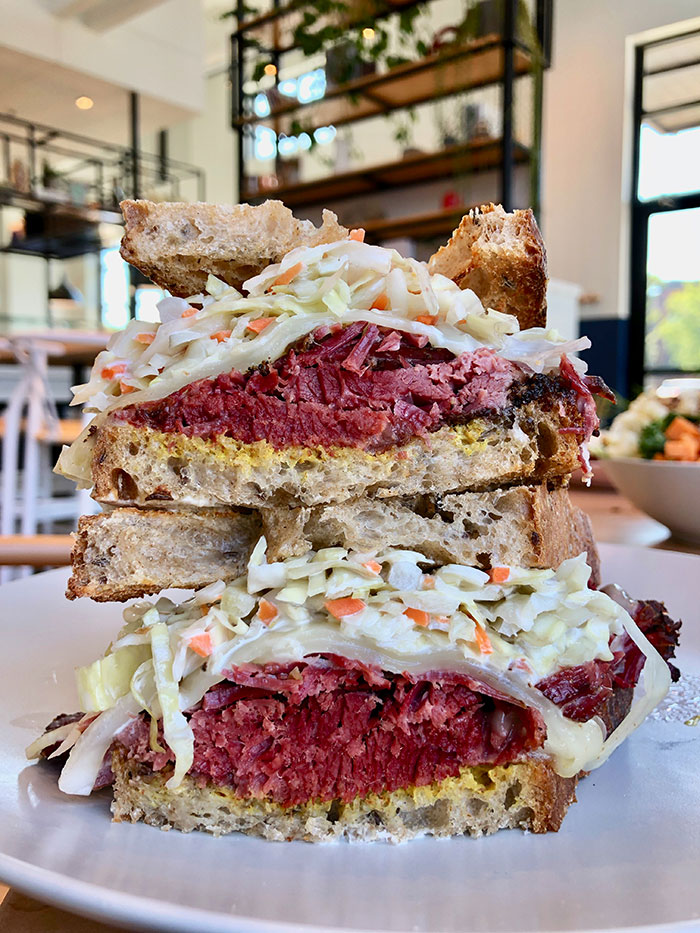 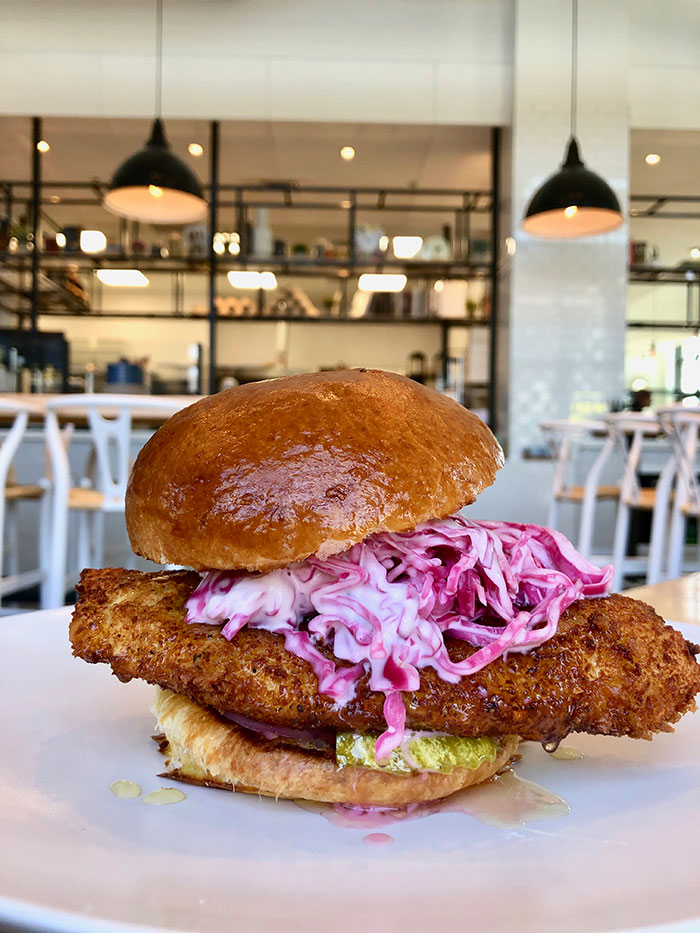 There are also several specialty vegan options thanks to chef Collin Cook’s innovative menu development, including: 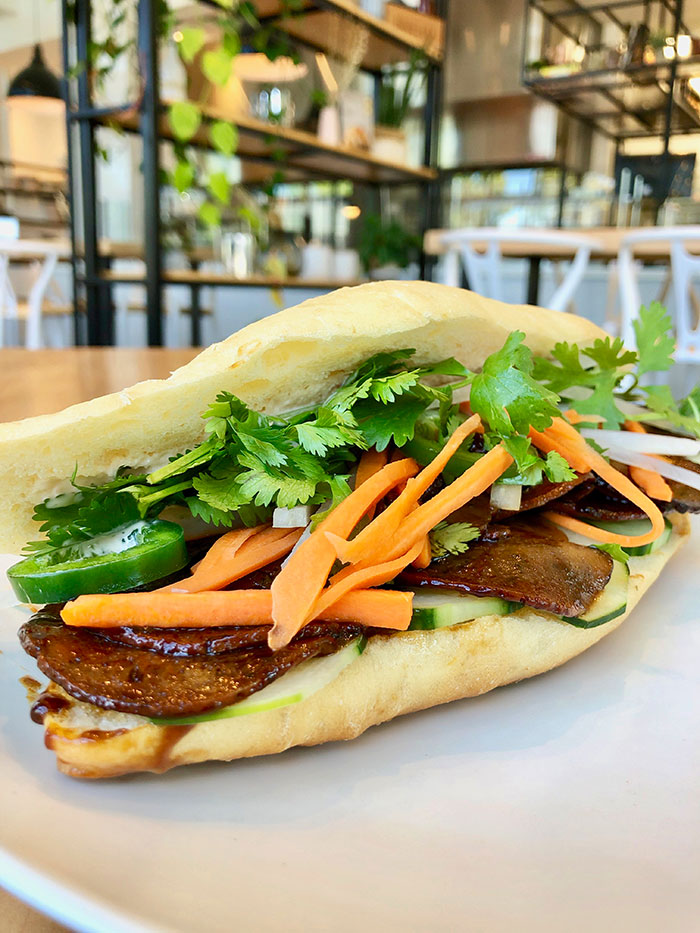 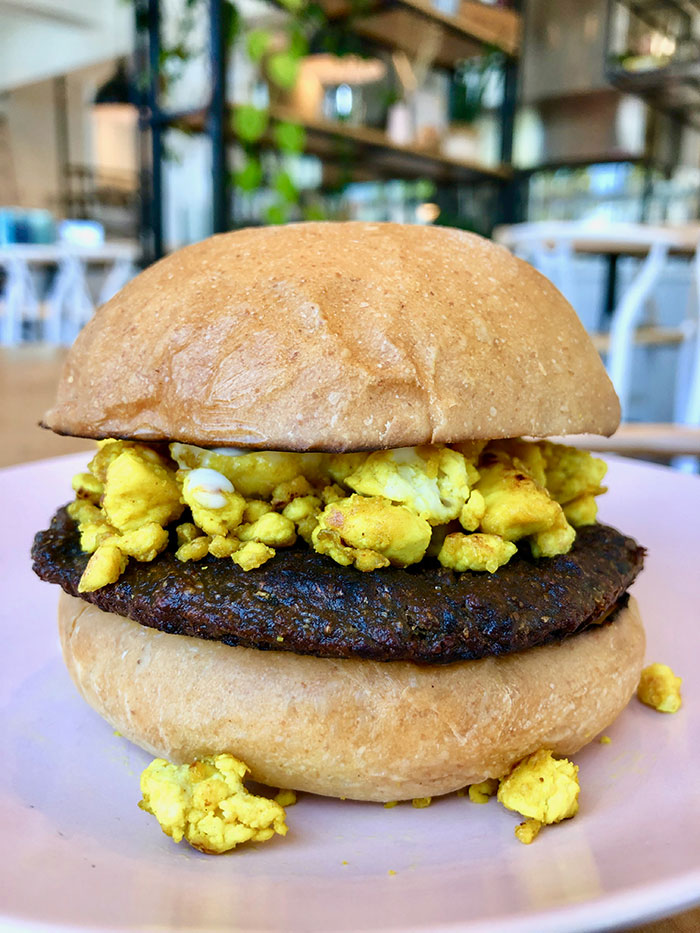 Look for Arons to add Roman-style pizza to the menu after the initial opening rush slows down. The square pan pizza is served by the slice. 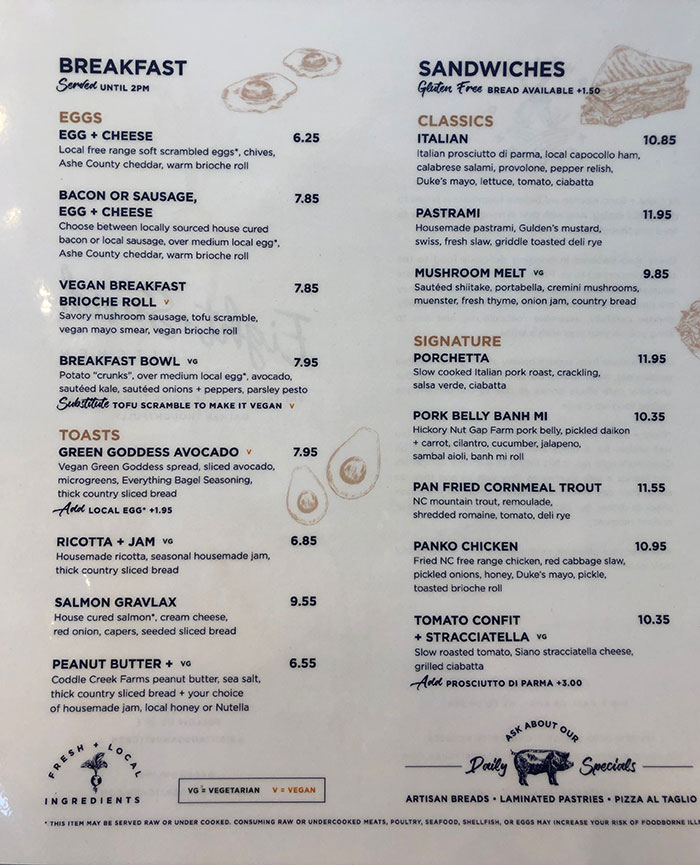 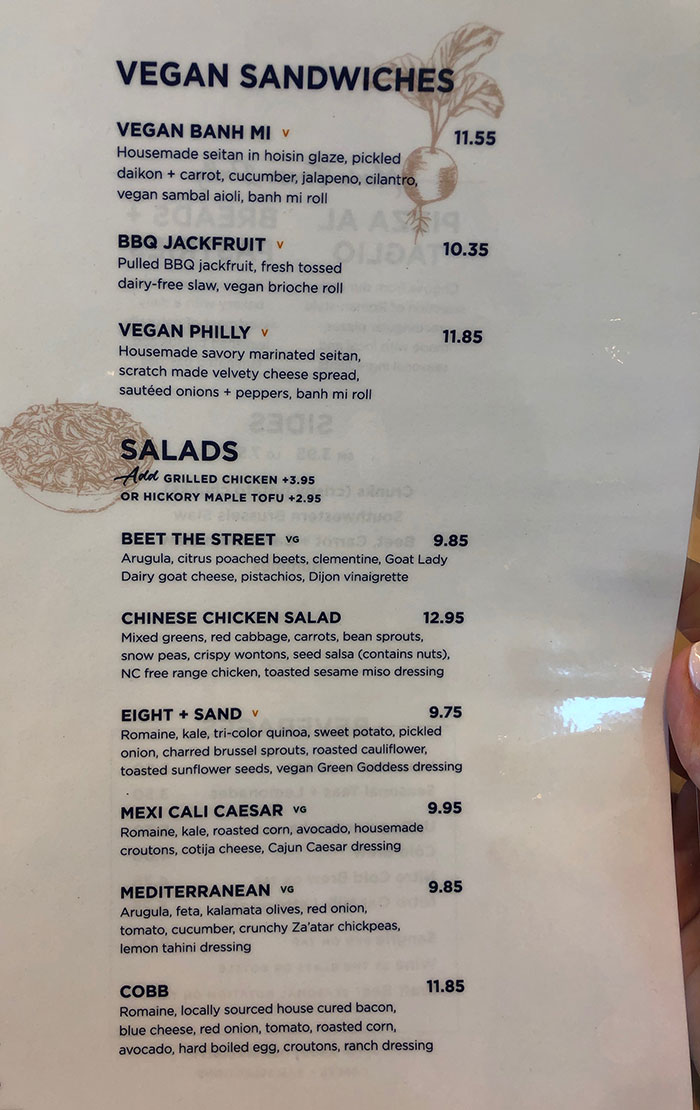 Fresh bread is available by the loaf along with pastries, doughnuts and other treats.

The cruffins — laminated croissant-style dough baked in the shape of a muffin — come in six flavors. Cookies & Creme, made with homemade Oreos prepared with black onyx chocolate, is Smith’s favorite. Dulce de leche was popular at friends & family night.

It takes three days to prep the dough used for the signature brioche doughnuts which are stuffed with vanilla custard, chocolate mousse, lemon curd, apple butter or strawberry jam. 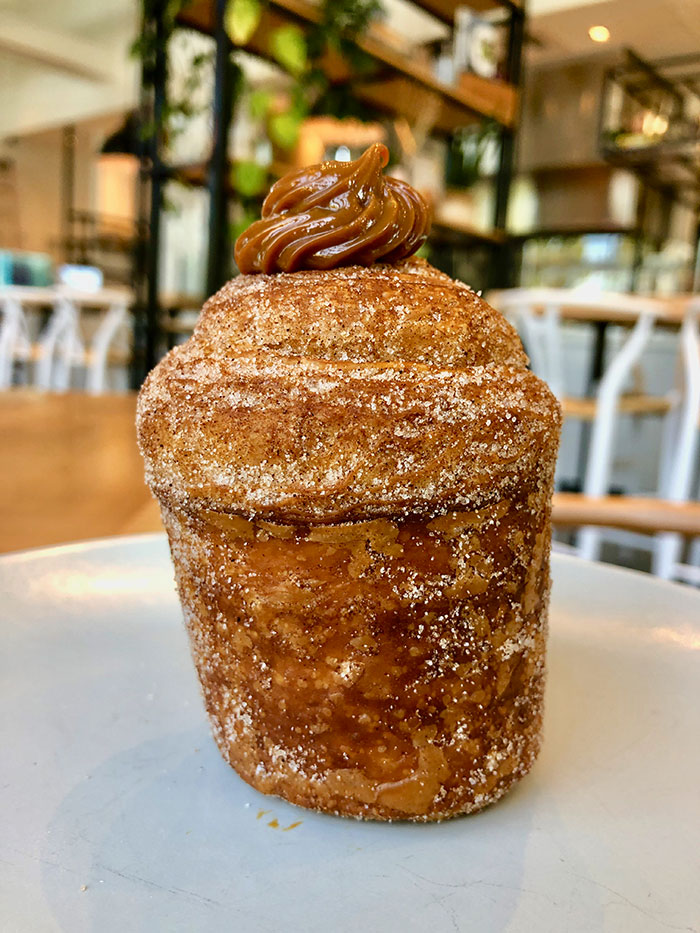 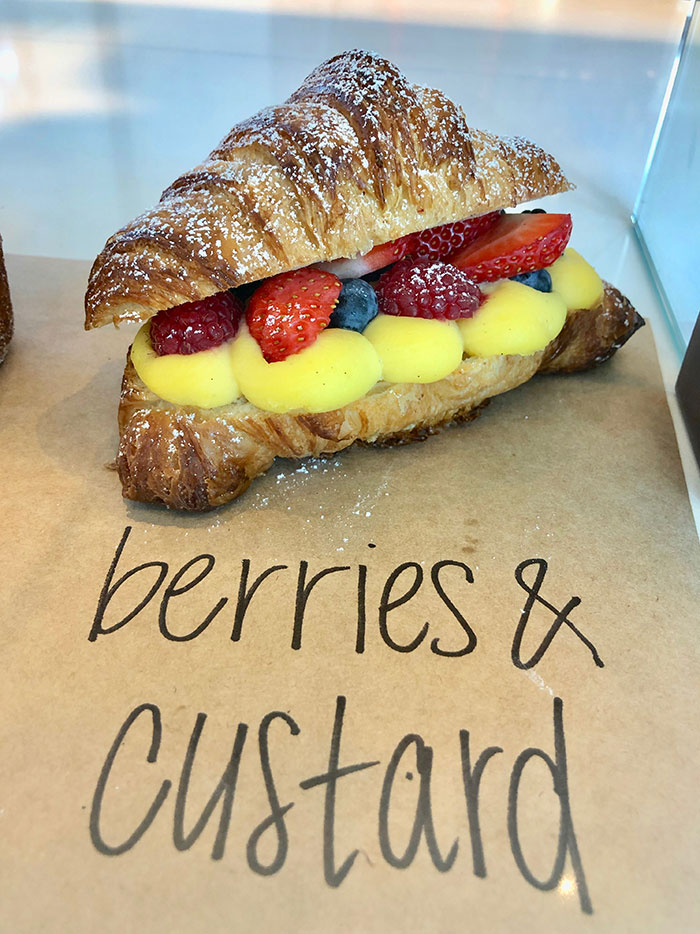 Arons has been dreaming up the concept for Eight+Sand since before he opened his first Inizio location in 2016.

He’s traveled all over the world — from Boulted Bread in Raleigh and Tartine in San Francisco all the way to Il Norcino in Rome — to hone his craft with the best of the best. It was there at Il Norcino he learned the art of the perfect porchetta from famed butcher Vitaliano Bernabei. That, he says, was “the sandwich that started it all.”

Arons got to know the Yoders working next door at their respective Dilworth locations and learned that their overlapping passions made sense for a joint venture.

“We discovered a shared love for worldly foods, sustainable ingredients, coffee, bread and more,” he said. “We have baker expertise, cafe expertise, multiple chefs and a whole lot of passion.”

Finally Eight+Sand, the product of years of training, opens today.

Especially in the busy opening weeks, expect a wait outside. Arons stressed they won’t service more than they can handle to ensure everyone enjoys a quality experience. They’re already prepared to accommodate a line with free coffee and courtesy umbrellas in case of inclement weather.