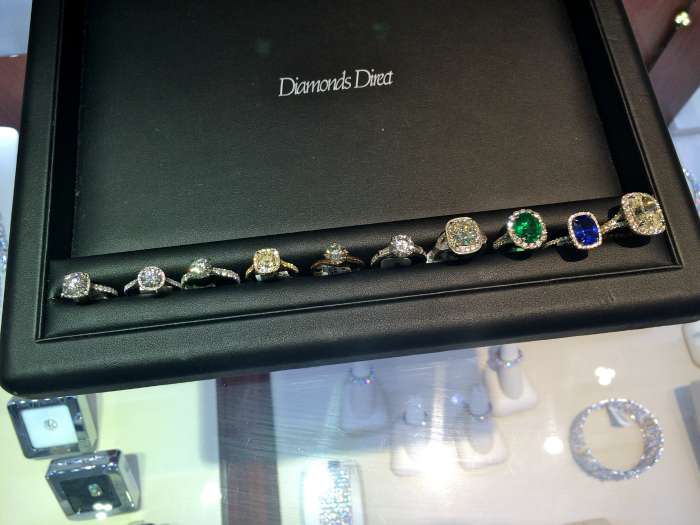 I woke up on Saturday morning with plans to do nothing at all, which to be perfectly honest is kind of my plan every weekend.

(Ted: I woke up Saturday morning in a panic. My wife was heading to a baby shower in Raleigh and I needed an activity with my son so that we could get out of the house.)

I was just settling in for my second cup of coffee and nothing when I got this early-morning text from Ted: Ted’s been bugging me to team up and do a piece about what it’s like to shop for engagement rings because he thinks it’s relevant to much of our readership and also enjoys that the whole institution of diamonds for love makes me super uncomfortable.

(Ted: I’ve only been to Diamonds Direct one time before, and I remembered the selection being outstanding.)

So I did know something like this was coming. What was NOT made clear to me at any point, however, was that I would have to pretend Ted was my future fiance and his baby was mine.

(Ted: This is a team building exercise as well. We’re trying to build the Axios Charlotte culture and I didn’t want to do trust falls and stuff.)

After laying some ground rules, getting our story straight and removing Ted’s wedding ring for authenticity, the stage was set for the weirdest Saturday morning of my life. I feel bad for Christy, the diamond expert who got saddled with this mess first thing on a Saturday morning.

(Ted: We went right when Diamonds Direct opened and only stayed for 13 minutes because I didn’t want to waste a sales person’s time if they had other customers. If you go to Diamonds Direct, please support Christy. She was fantastic.)

Ted laid out our fake story for her:

“We’re meeting his parents for brunch in 20 minutes so we need to go fast. He’s trying to convince them to pay for all or at least part of the ring so we don’t really know our budget and want to see everything from $5,000 to $100,000 in a range of styles. (This is outrageous, by the way.) We want to bring them photos and prices of everything so they’ll get excited and give us money. (Even more outrageous.)” Somehow this disastrous storyline didn’t faze her at all. She dove straight in giving me a quick education on cuts, colors, carat weights and clarity – basics in diamond buying about which I know absolutely nothing. And then she started pulling out rocks. I guess I probably tried on 15 or so but she whisked away any that she felt didn’t spark an immediate positive reaction from me. She’s been doing this since she was in college so she’s got a good read on what you’re thinking when you put each one on.

The final lineup arranged left to right on her perception of my favorite to least favorite based on how I reacted to them: Below is our take on each one. Weights are for the center diamond only, not for the total of all the other little diamonds around it. (Does it even have to be said that all of them are incredible and it’s insane that I even got to hold them all? Yes? Ok there it is.)

Katie: I don’t know. I just like it and want it crammed over my knuckle for eternity.

Ted: Solid, but felt like the setting was a little too small for the diamond. At this point I realized that Katie might be realizing that we’re taking lots of photos of her hands. So I was waiting for her to complain and say “Ugh, I can’t believe were taking photos and I haven’t got a manicure in a month.” She didn’t. I don’t know if she gets manicures. Probably not. I feel like she’s not into that stuff, but maybe she is. We never talk about this because it’s too weird. Katie: I find it alarming that there’s a $20,000 price difference between my first and second picks. Am I doing this right? I’d do this without the halo (the little diamonds around the center rock). I like this pretty much as much as I like the one that is 3x more expensive. I feel like I’m at a wine tasting and can’t tell the different between a $2 bottle and a $200 bottle. Katie: I don’t totally remember trying this on. I told her I’m simple and straightforward and I feel like that’s what this delivers. Except that it’s $16,000, which is neither simple nor straightforward.

Ted: Why is this ring so unphotogenic? Weird. Love the look. Oddly, I like the look of small diamonds that look like they’re set deeper into the ring. Katie: We were looking at all white gold so I asked to see a “gold-gold” because that’s what my mom and sister have. She corrected me with, “Sure, I’ll get you a yellow gold.” I know nothing. Katie: Christy wanted to throw a rose gold into the mix because it’s trendy right now. I’m a no on this, but I don’t hate the style. (I think we lost the price on this one)

Katie: My fake fiance made me try on some with “baguettes,” which are those long diamonds on the side. Not for me. We tried to eliminate it from the final lineup but my fake fiance wouldn’t allow it because he’s the worst.

Ted: My favorite – it looked like the one that I got my real wife. Looks like it’s “one unit” instead of a diamond and a setting. I really liked this one. Katie: Gorgeous (obviously) but way too big. Entirely too much going on. I would no doubt lose it immediately.

Ted: Too big. Also, are Katie’s fingers big or something? Why didn’t this fit? I didn’t want to ask Katie because she was already emotionally delicate. Katie: Again, my fake fiance insisted we try on some colored stones. No.

Ted: I love emerald and sapphire rings. Especially sapphire. Although this felt too antique-y for me. Katie: It’s like the Heart of the Ocean from Titanic.

Ted: Something’s off. But I love that blue. Katie: This is comically large. I found it oddly satisfying to put it on and not like it at all.

Ted: BOOM! I joked if I could trade in my 9 month old for the ring and I think Christy was even more weirded out than before. I had never stepped foot in a real jewelry store and had also never tried on engagement rings prior to this ridiculous excursion. Christy said that for women like me who haven’t put any thought into this process, there’s actually less pressure on the giver of the ring because odds are the recipient will fall in love with whatever she gets.

For someone who has a clearer vision of what she wants in an engagement ring, the ring buyer will have to do some work to get it right. Here are some tips:

(Ted: Guys have to go alone at least once. It’s so overwhelming and a right of passage. You need to suffer.) Katie adds: Girls too! Women propose to women.

As we were wrapping up I thanked Christy for running through all of this so quickly and for putting up with our outlandish requests. I asked if this was an odd session and she said without hesitation, “Oh yeah, this was definitely one of my weirder ones.”

(Ted: Special thanks to Diamonds Direct. Your staff was outstanding. Hi, Christy!) 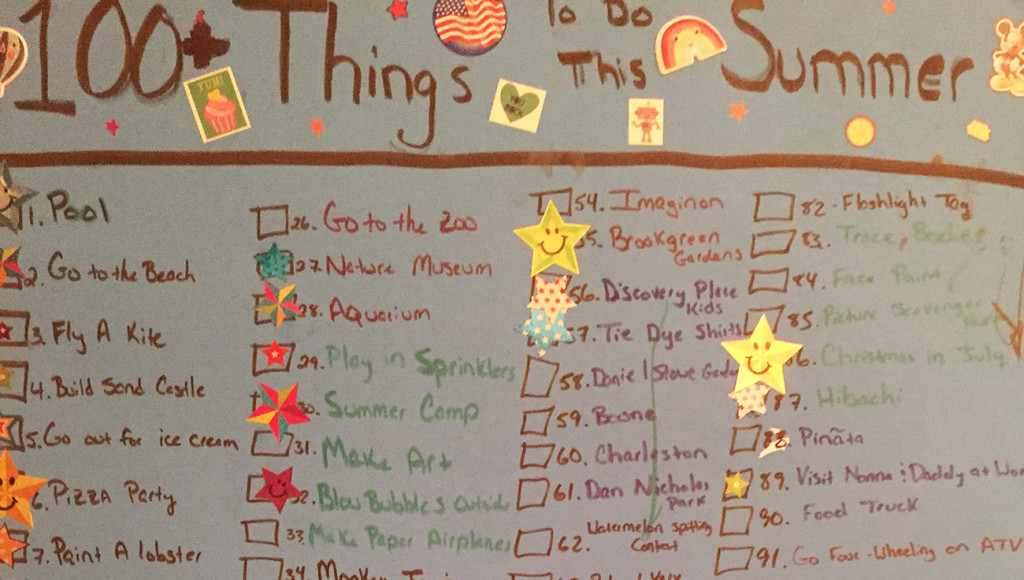 An obituary to the summer of hurry up and slow down