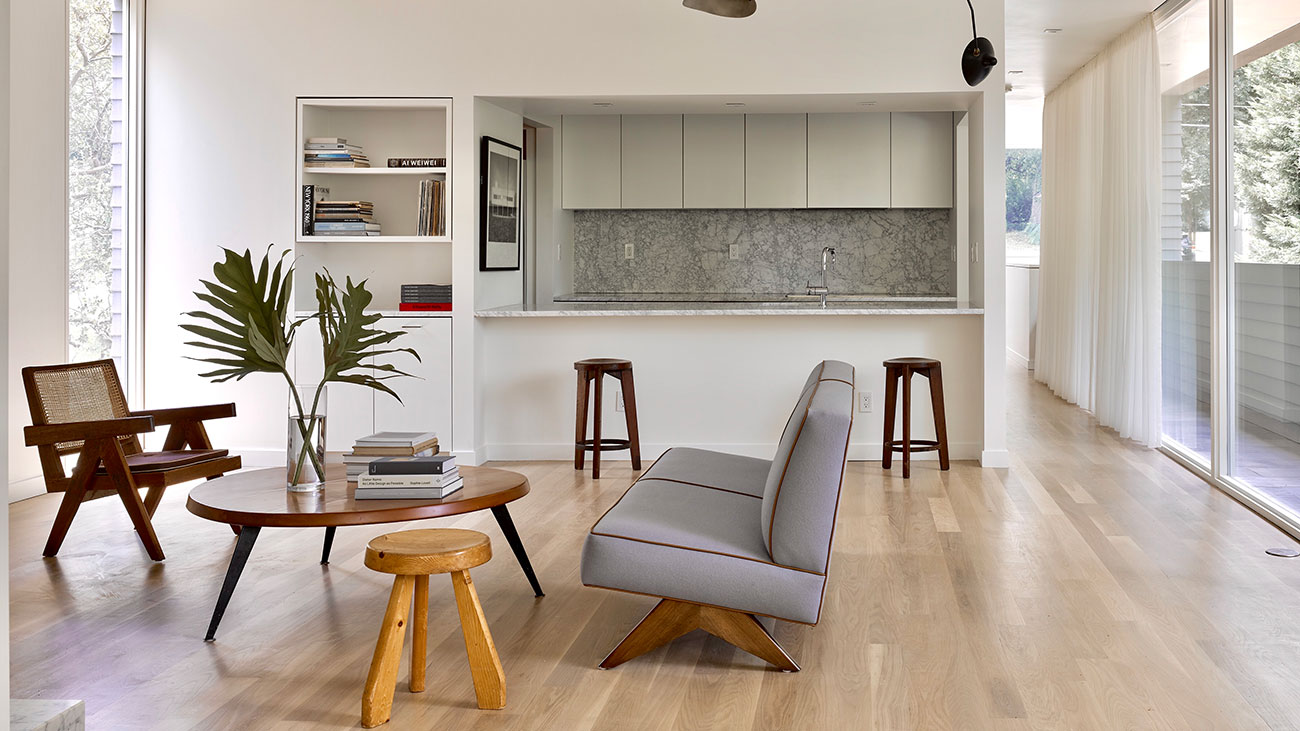 The story of The Noda House begins with Perry Poole. In 2003, Poole found a corner lot in NoDa where he envisioned a home that would be the first of several places for his architectural firm, Perry Poole Architects (PPA) to experiment with design and construction. 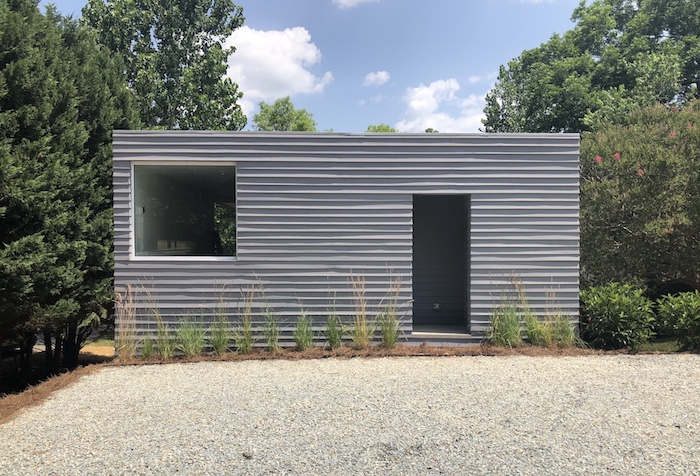 “He and I drew this house ten years ago,” says architect Drew Button. “The first time
Perry brought me to the site, we brought a ladder and a line level to determine the height of the
main floor and to see the view for the future living room and covered porch.”

That view was of the stream that runs behind the home and a row of evergreens along the side of the lot—elements that even now give the space a feeling of escape within the city. 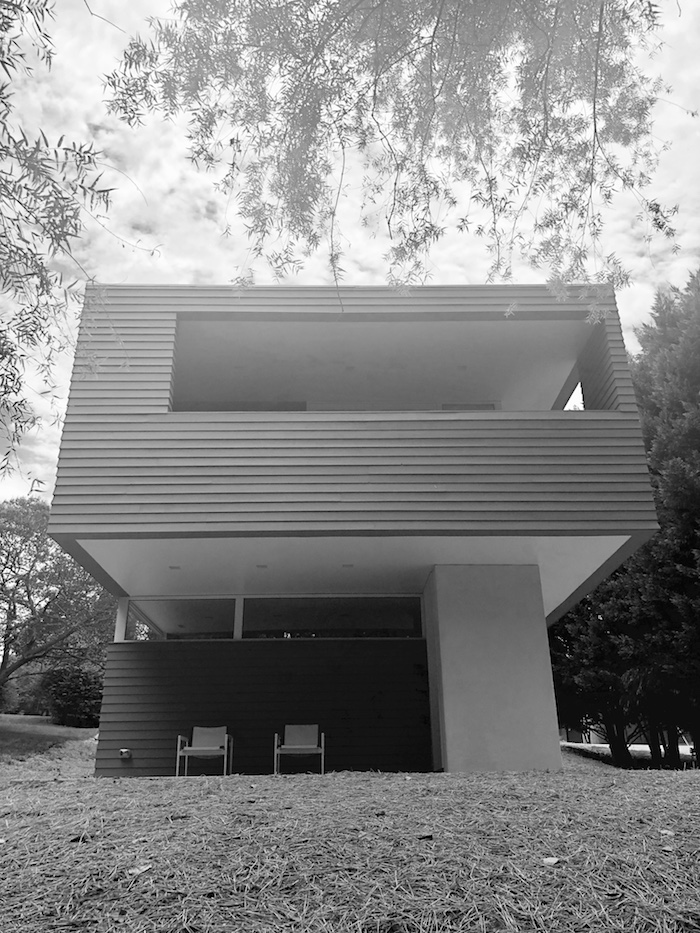 It’s a striking home from the street. Wood siding, painted in Benjamin Moore’s Whale Grey hue, and one door and window are all that embellish its facade. The flat roof and simple landscaping emphasize its box-like structure. But turn the corner and the house stretches back across the lot into something more complex. Floor-to-ceiling windows span the back of the house with an elevated outdoor space running along its side and back. It’s a house that’s designed to create a fluid flow from its front to back. 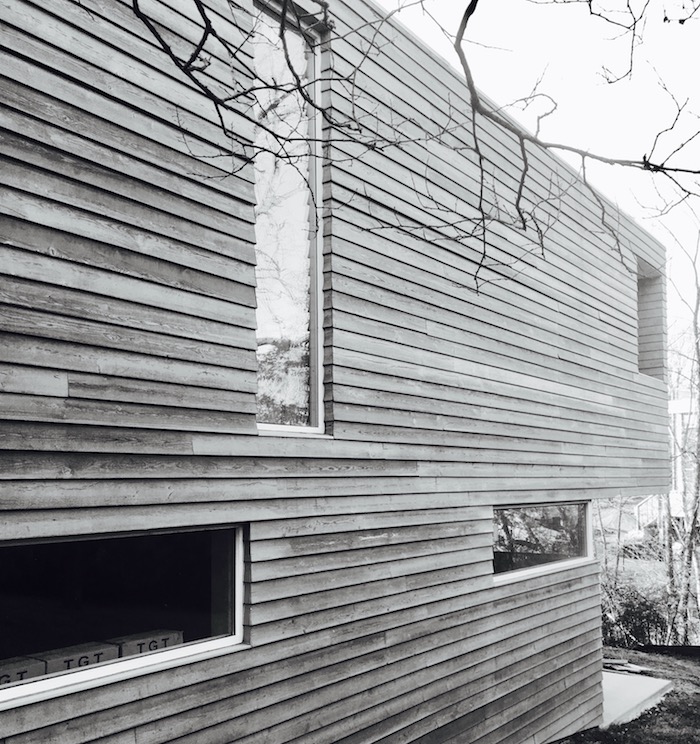 The home’s initial foundation and framing was by Arbor Construction with the rest of the construction being completed by PPA’s Aaron Price—and Poole himself. “When the pricing for the direct set window package came in too high Perry decided to build them himself,” says Button, who notes that PPA offers both architectural design and design-build services. “He engaged the craftsmen and suppliers he needed to help him complete the window package without making compromises.”

At 2,400 square feet it’s not an overly large home. “PPA wanted to show how you achieve a lot with simple gestures,” says Button. “It’s understated and that was intentional.” There are three bedrooms and two-and-a-half bathrooms, with the master bedroom at the front street level and the two additional bedrooms and a studio in the walk-out lower level. 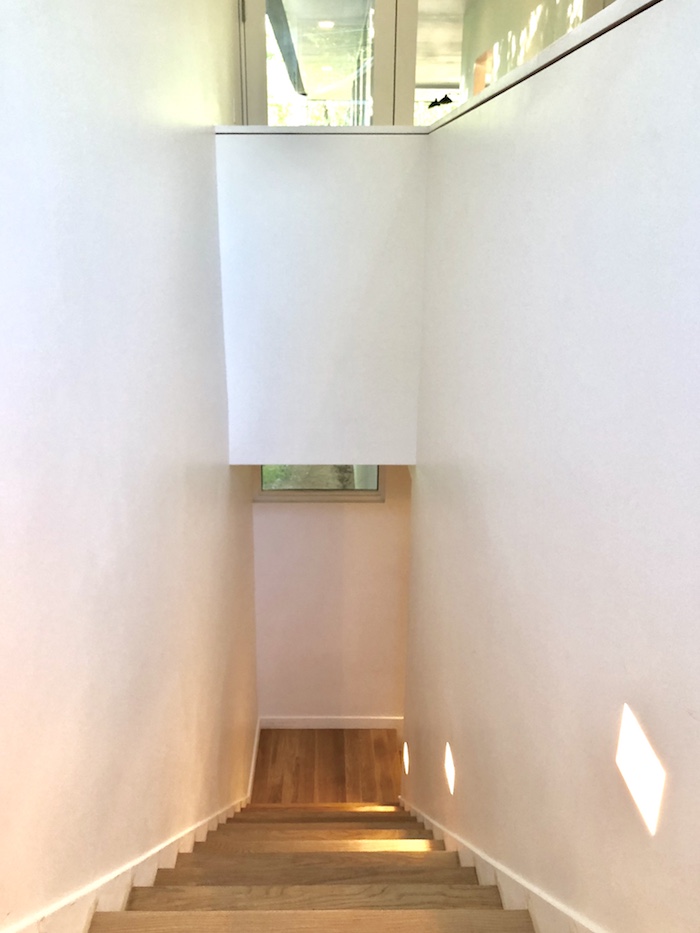 The simple touches throughout the house are what set the space apart. Designer Margaret Tugwell, who also worked on the home, says that is staircase is one of her favorite aspects. “I love the views as you ascend and descend the stairs,” she says. “And I love that there’s no nosing on the treads. The wood tread is flush on each step.” 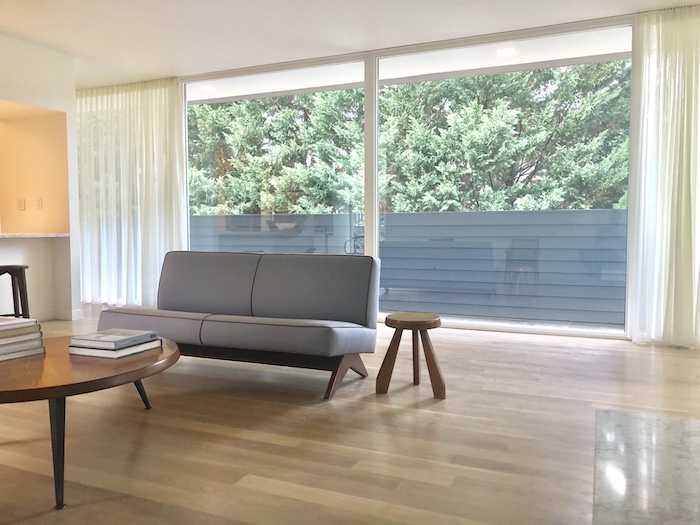 She also points to the built-in curtains that drape over the wall of windows in the living
room area. Interior designer Scott Newkirk designed the curtains, which he says are made from
a sheer fabric and feature a tiny weight along the bottom to ensure they stay in place. 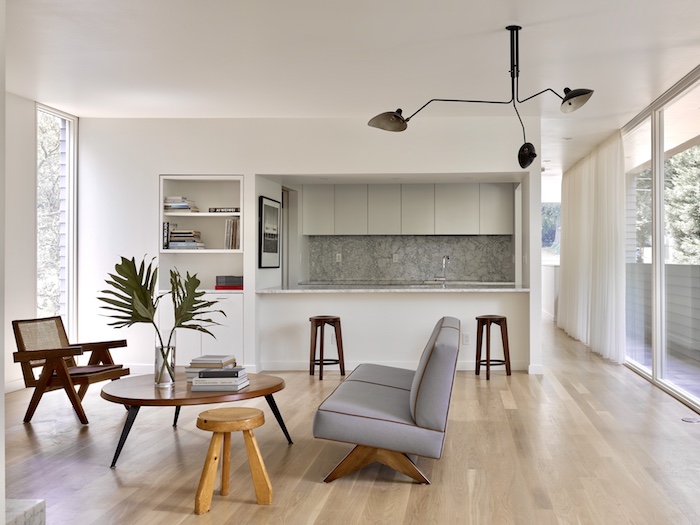 “There’s something more interesting about not looking straight through the glass,” says
Newkirk. “When you’re sitting in here, no one can see you, but you still get the light in and
subtle views out. It softens everything in the room during the day and glows like a lantern at
night.”

For Button, one of the most compelling parts of the house is an external covered corridor of what he calls “wasted space,” which runs along the wall of windows, past the kitchen and living room, before turning across the back of the house into a larger covered porch. “That kind of design decision can be a tough sell on the front end—people want more heated square feet, but the payoff for that space is far greater,” says Button, noting that during a recent cocktail party the space created an easy flow for people to mingle as they moved along the side of the room. “You have to experience it to appreciate it. There’s no math that adequately explains what that little outdoor connector does.”

Newkirk says that the outdoor space makes the home actually feel larger. “You’re connected to the nature that’s right out there,” he says. “The first time I was here it was about 5:30 in the evening and the light was just gorgeous. The doors were open and I could hear the creek. There’s something very nice about that.” 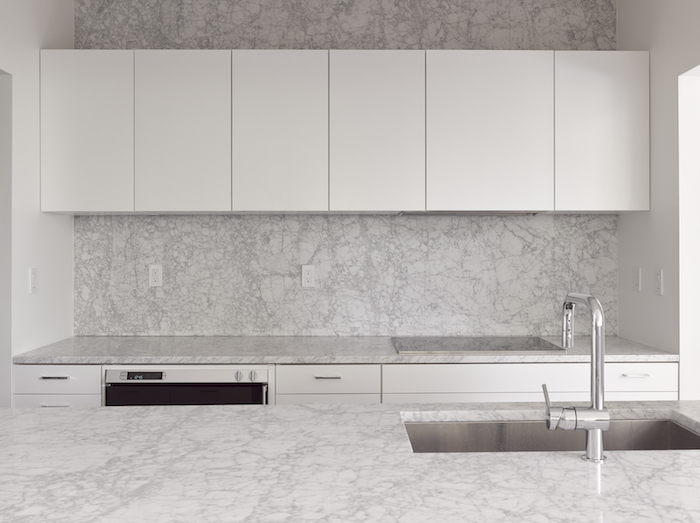 The house does feature plenty of points that will be more obvious perks for prospective buyers though. Carrera marble can be found on the wide countertops in its sleek kitchen, on the cantilevered fireplace hearth, and in its stylish bathrooms. Walls covered in All White paint by Farrow & Ball, alongside white oak flooring give the house the feeling of a bright and blank canvas. And hard-to-find features like custom-built square recessed lighting, a Gaggenau oven, and a vintage wall clock by George Nelson set this apart from your average modern build. 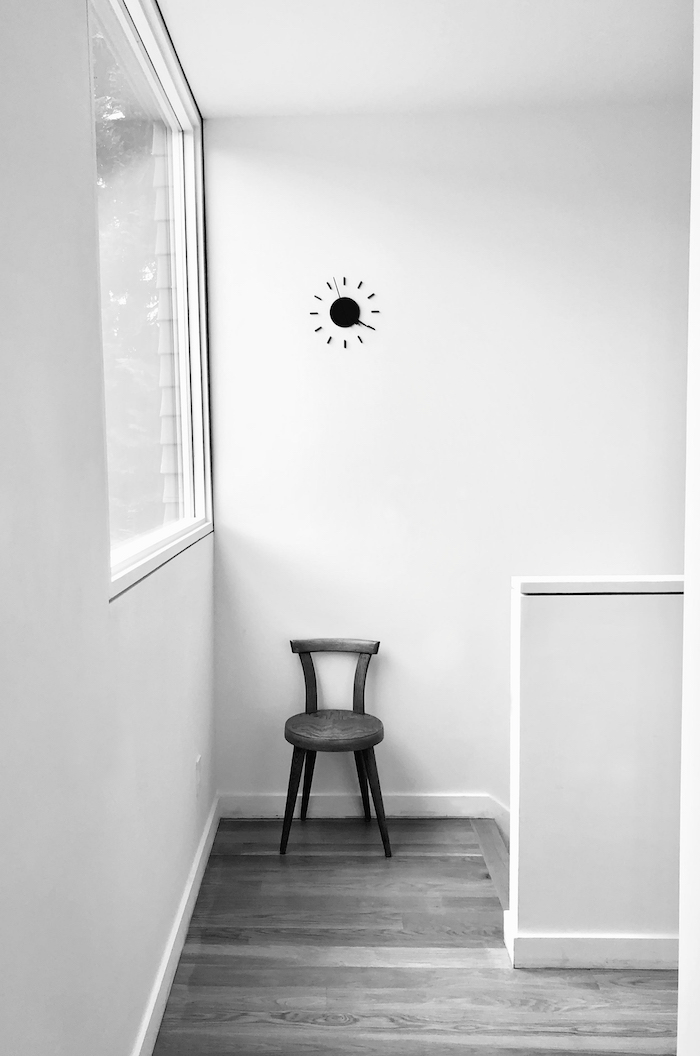 The home will be for sale soon, but its architects and designers are not in a hurry. They recently they held a party at the home to celebrate its completion. The evening featured artists Lydia Bittner-Baird and Ken Knudtsen, as well as Kristi Kirpatrick, who created an original work of art on the wall. Poole and his wife, Laura, own the boutiques Capitol, Poole Shop, and TABOR, and plan to use the home for photoshoots for the shops next month. “I think everyone will miss it,” says Tugwell of the eventual sale. 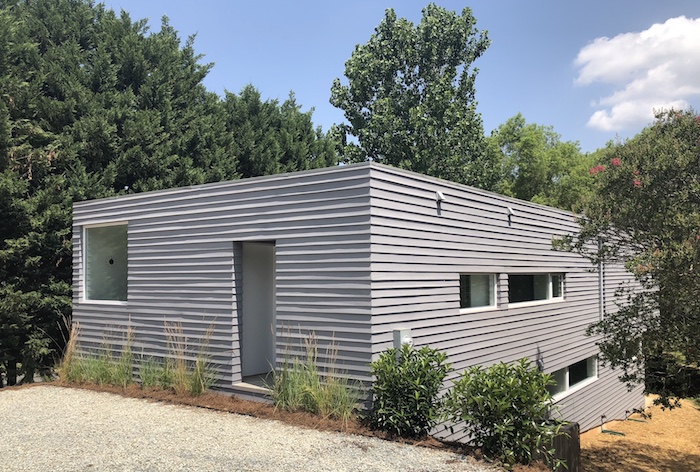 But the talented group is already planning their second case study home. Poole owns another lot just up the street and they’re eager to use what they’ve learned from this home in the next one. “We call it a case study because we are embracing the optimism and experimentation of the Case Study Houses sponsored by the Arts & Architecture Magazine just after WWII,” says Button. “And we are challenging ourselves to learn something new with each.”

And, as it turns out, the houses are the perfect fit for NoDa. “It’s a little bit like the Wild West out here, more so than other neighborhoods,” says Newkirk. “This experimental home just feels really right here.”

See all 2018 Home of the Year Finalists. 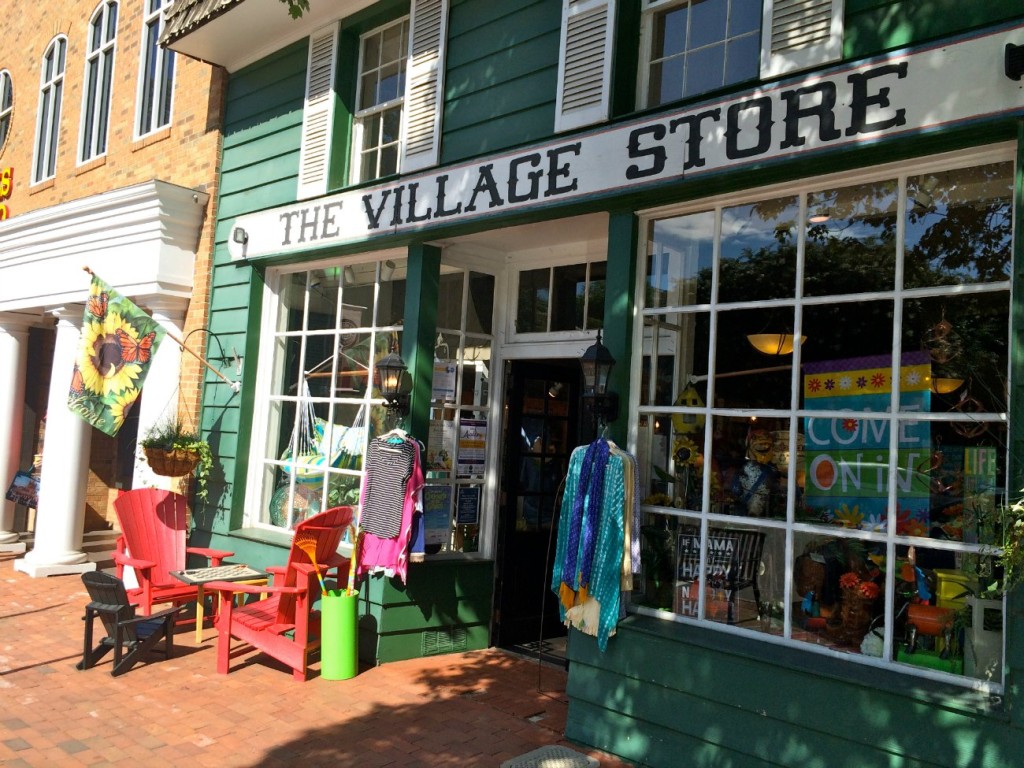 Considering a move to Davidson? 12 coolest homes for sale within walking distance of Davidson’s cute downtown