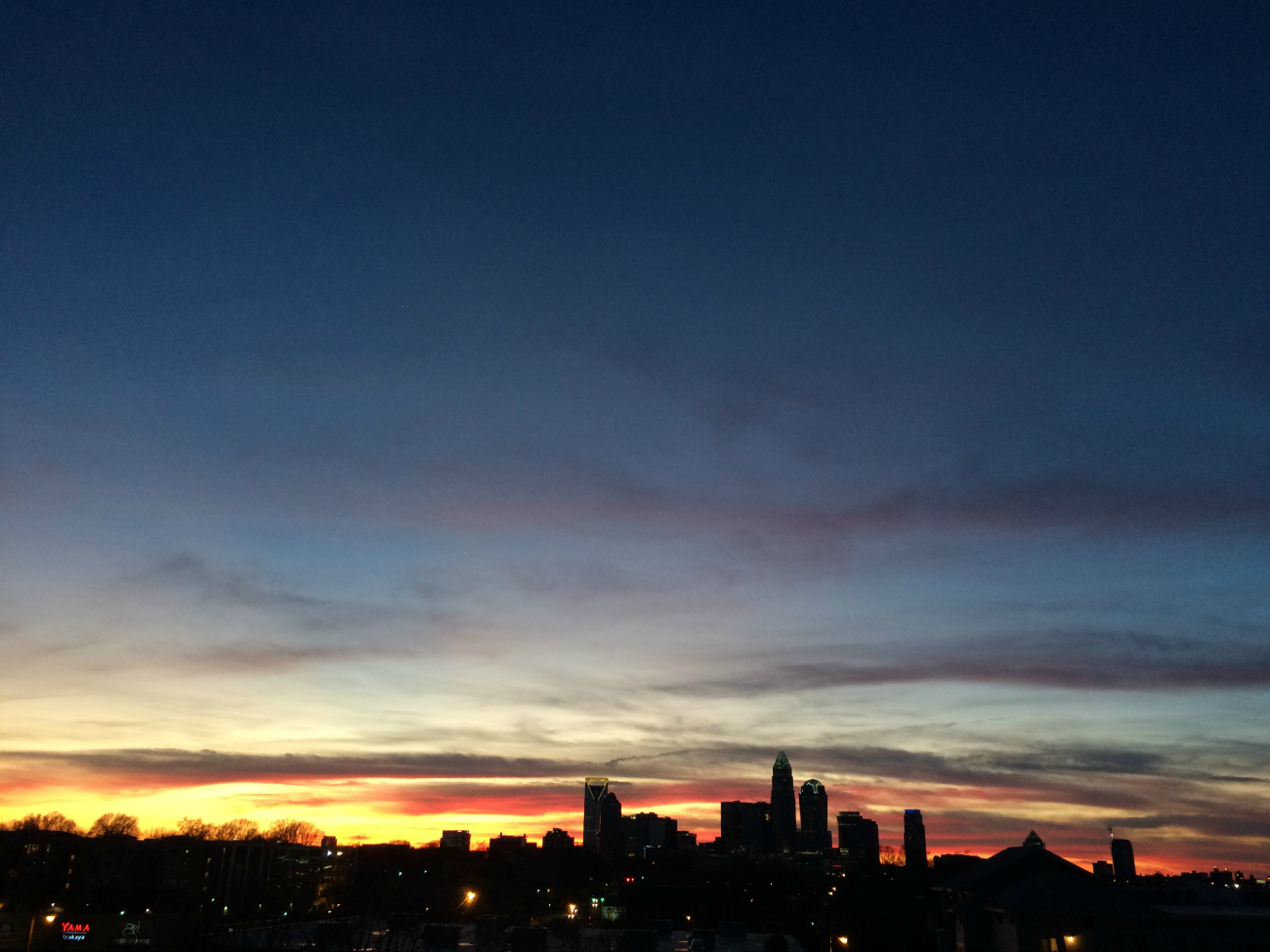 “This time last year you hated Charlotte and were dead set on moving to New York.”

That’s my friend Jen speaking truth over wine and frozen yogurt in my apartment last Friday night. She made one of those spontaneous drive-by drop-ins that only comes with real friendship and a strong sense of place–a visit that elicits that kind of feeling you get when you run into people you know at the grocery store or know shortcuts without using Google Maps. It’s that kind of thing where you feel home.

The weather is perfect and the windows are wide open and everything just feels delicately right in such a precarious way that I half expect it to all come crashing down any minute like some wobbly souffle I never thought would set in the first place.

Because the thing is she’s not wrong. I have hated Charlotte since the day I moved here. I moved to Charlotte four years ago on a pre-meditated breakup. We weren’t over yet but he and I had decided to move to South and North Carolina respectively and I knew as soon as our lives crossed state lines that we’d be done. If breakups were Band-Aids we peeled ours off as slowly and painfully as possible and sure enough after about a month were officially ending things on the 4th of July 2011–giving a whole new meaning to Independence Day.

On my own and unwilling to accept a support system, I threw myself into a series of erratic and isolating jobs and activities (and too soon a relationship) that just never felt quite right. I kept anyone who came near me at a safe distance and set my expectations low to avoid disappointment. On the outside I probably looked like a fun, non-traditionally successful, possibly shy girl but on the inside I was wrecked. I complained about everything and everyone and never let myself even consider that things could be good for fear that I’d be settling on something I never wanted when in reality I didn’t even know what I wanted. I was always looking for the next best thing and talking about my grand plans to exit. It was a paralyzingly cyclical and pessimistic way to live.

It sounds really dramatic now but I was basically devaluing myself and everything around me, the city of Charlotte included, as a defense mechanism for displacing the blame for why I felt so crappy all the time. I can’t make friends because Charlotte is lame. I can’t make money because Charlotte’s economy sucks. I can’t have fun because there’s nothing to do in Charlotte. Ultimately, I can’t be happy because I’m seeking it from outside myself. I’m holding a city responsible for my happiness. Does this not sound ludicrous? It is. My mom has always said “Bloom where you’re planted.” Southern at heart but rounding out their 27th year as “temporary” Illinois residents, my parents have spent my entire existence blooming through brutal Midwest winters and building a life somewhere they never really wanted to be. They could be happier somewhere else probably, but they also could be and are happy right where they are. What a concept.

In hindsight everything I said I hated about Charlotte I really just hated about myself. Too safe. Too boring. Too predictable. It took coming into my own and being really happy to feel safe and settled and being really proud to bail on plans when I want be by myself and being comfortable with the routine grind for me to see all the thrilling risk and excitement and spontaneity that bubbles just below the surface here in Charlotte like a pot about to boil. In my case anyway, you just have to give it some time to heat up.

Charlotte is arguably a transient city and I never thought I’d stay. People come and go in what seems like two- to three-year cycles and “natives” are allegedly hard to come by (although I have met many). With that much turnover it can be hard to put down roots in shifting sands, but if you dig down deep enough there is something really solid.

I have finally found solid ground here in Charlotte and it feels really good but it took figuring myself out first. I would argue that if peace and clarity were the chicken and the egg, the peace would indisputably come first. When the waves die down you can see to the bottom of the pond, right? Peace first, clarity second. For me it ultimately comes down to whether you’re running to or from something and for so long I’ve been desperately trying to run away from Charlotte when what I was really trying to escape was myself. No matter where you go, no matter who you’re with, no matter what you do, you will always be with you. So you have to start there. There’s not a city or a relationship or a job in the world that can change that. Trust me.

So while I do think Charlotte is thriving and growing at a rate unmatched anywhere else, I don’t really think it’s all that different than it was four years ago when I got here. I just finally let myself see it now and I see really crazy good things happening for all of us. I feel like we’re witnessing a definitive moment in Charlotte’s history and I just decided I want to be a part of it. I found something to run towards. I’m really happy here. I have solid friends I finally let in. I have my family. I’m in love in a good and healthy way. I have a great job. I finally don’t hate Charlotte.

So here I am and here we are and here’s this new site. I hope you love it because it’s for you.