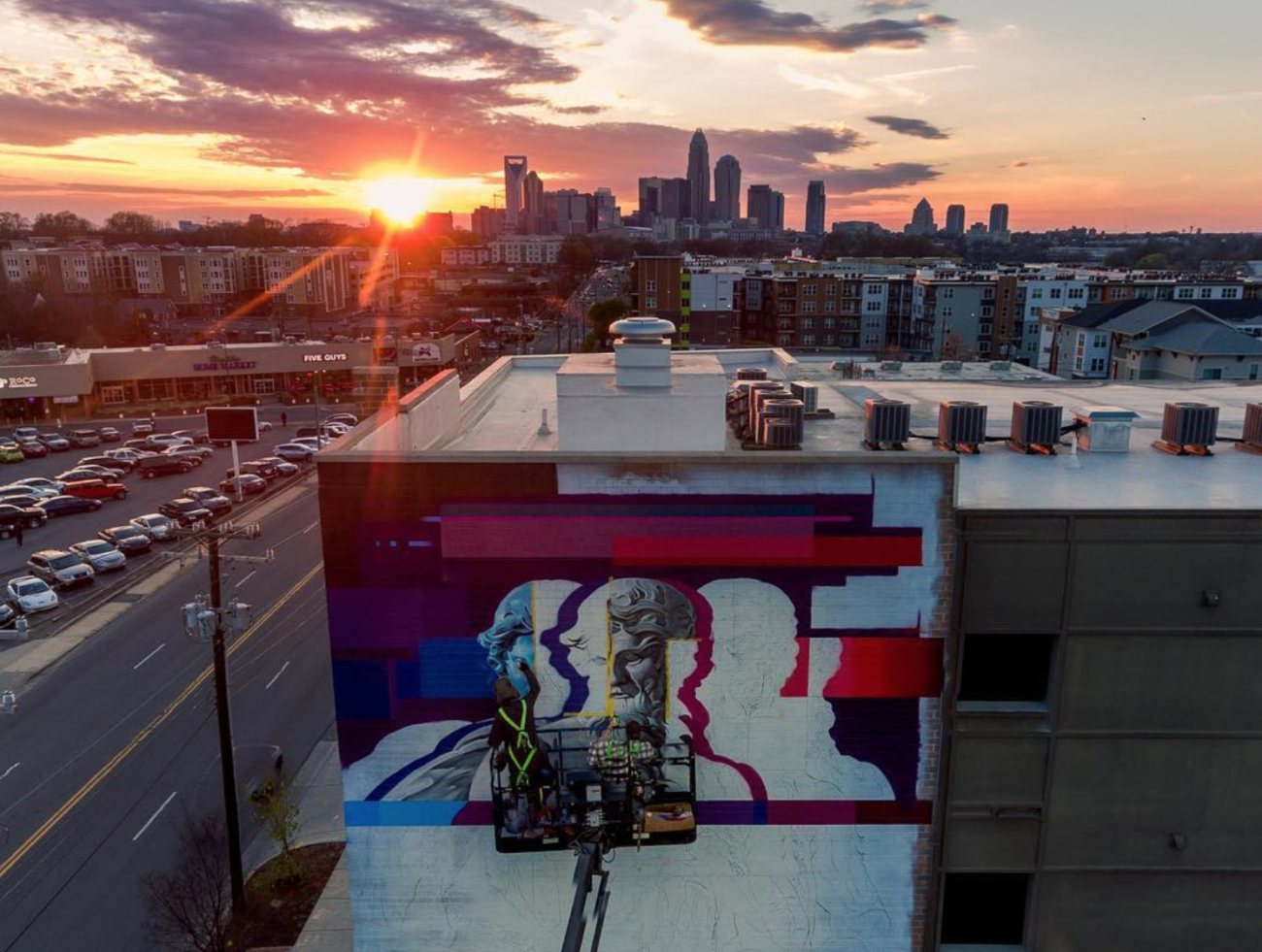 Any time he and his partner, Matt Moore, are working on a public project, passers-by will inevitably stop to watch them at work, cars will honk and they zoom past and the neighbors nearby will shake their heads in awe.

The latest project from Hooker and Moore has gotten even more of the Rudy Effect than usual.

Satisfied with our progress so far. About one more week and @hookermedia and I should have this baby wrapped up. An enormous THANK YOU to everyone for all the love and support on this one. 📽: @SP1VEY #WIP

The five-story mural along the wall of The Nook apartments on Central Avenue in Plaza Midwood has been a showstopper, which is exactly what the two artists were hoping. 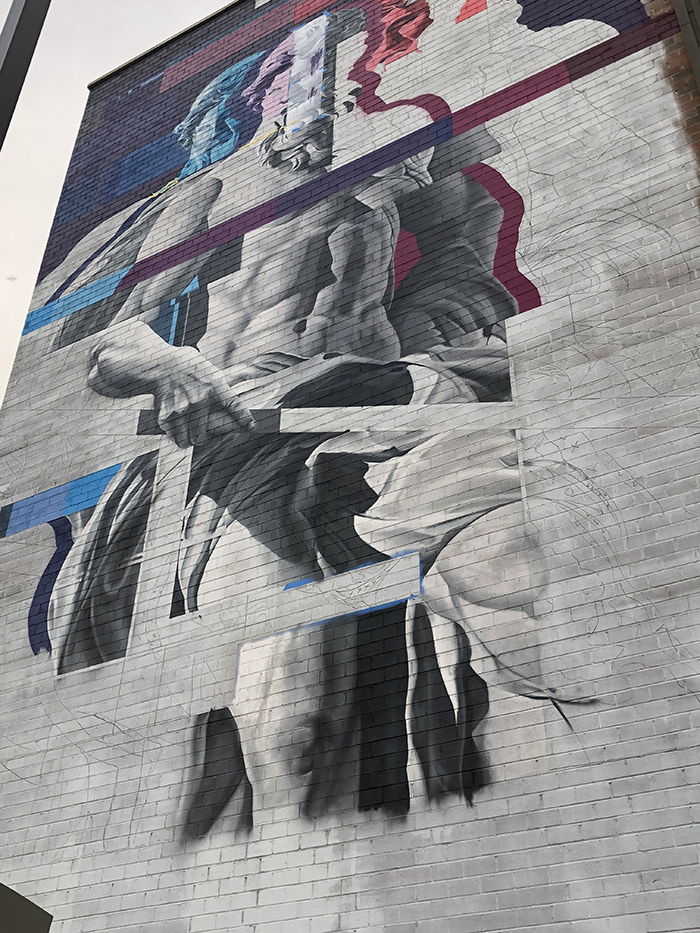 Most people, Moore said, think the mural is of either Zeus or Jesus, but it’s actually Neptune, the Roman god of the sea. Unlike most of Hooker and Moore’s work, it’s meant as something of a political statement in a neighborhood changing rapidly.

“I always say you can’t stop the wave from coming,” Hooker said, “so you might as well surf it. That’s one of the reasons we chose Neptune. He makes the waves.”

Rather than a lifelike Neptune, however, the artists specifically chose an image of a statue. The idea, Moore said, was to create something that conveyed permanence and strength.

“We wanted to do something that represented strength,” said Moore, who lives just outside Plaza Midwood. “We’re proud of this neighborhood, and we wanted to show the other neighborhoods that this is a strong, rad neighborhood.” 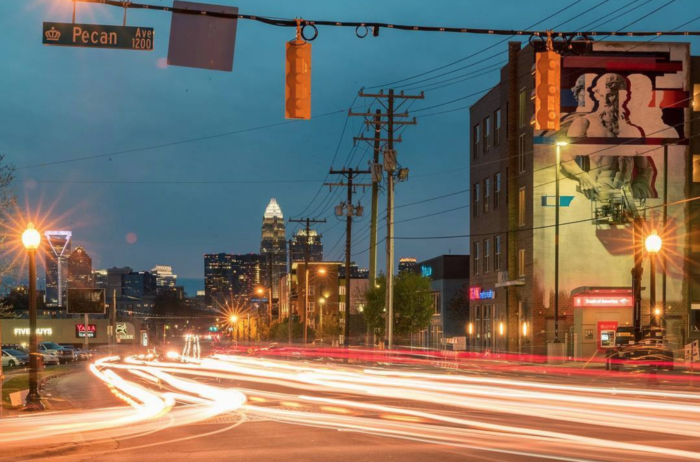 The color palette is a combination of red and blue, another overtly political choice, Moore said. That’s a little outside their wheelhouse but the image of strength only worked in conjunction with an idea of cooperation.

“We don’t get super cerebral,” Hooker said, “but this is the closest we’ve had to a mutli-level meaning.” 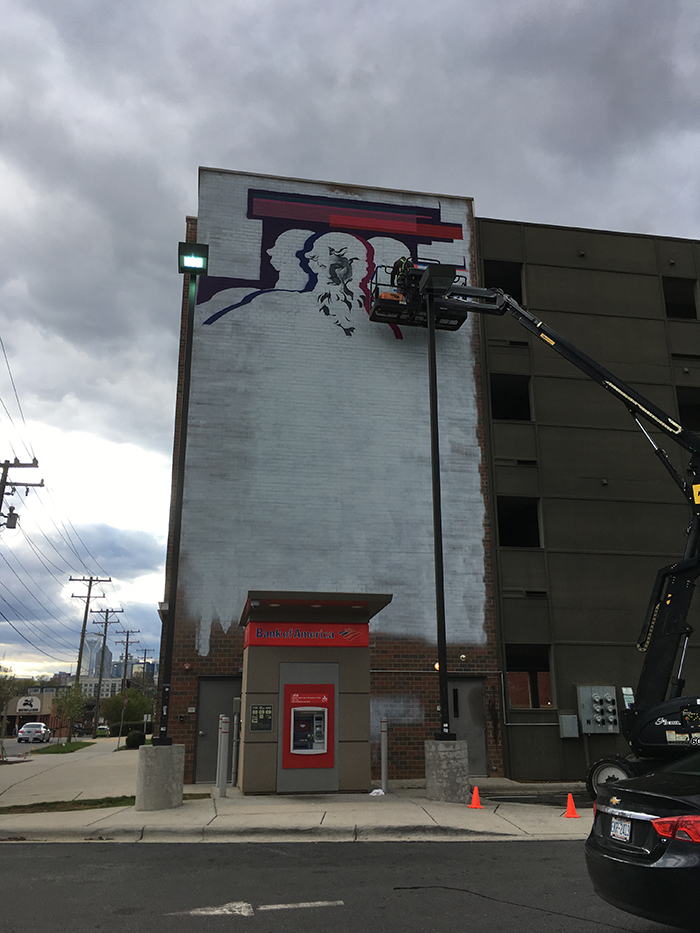 Hooker and Moore have become two of the most popular and prolific artists in Charlotte, and their work can be seen all over the city – from the child peeking behind a curtain along the wall of the Charlotte Theater to the beer pouring into a glass at NoDa Brewing. But this project was a labor of love nearly three years in the making.

“I’ve wanted to paint that wall since they built the building,” Moore said.

The huge swath of brick along the Eastern wall of the building next to a Dairy Queen and a Bank of America ATM was, as former Plaza Midwood Neighborhood Association president Tom Egan said, a blank canvas. Or, as a number of other residents had told him, an eyesore. That’s where the seed for the mural idea began. 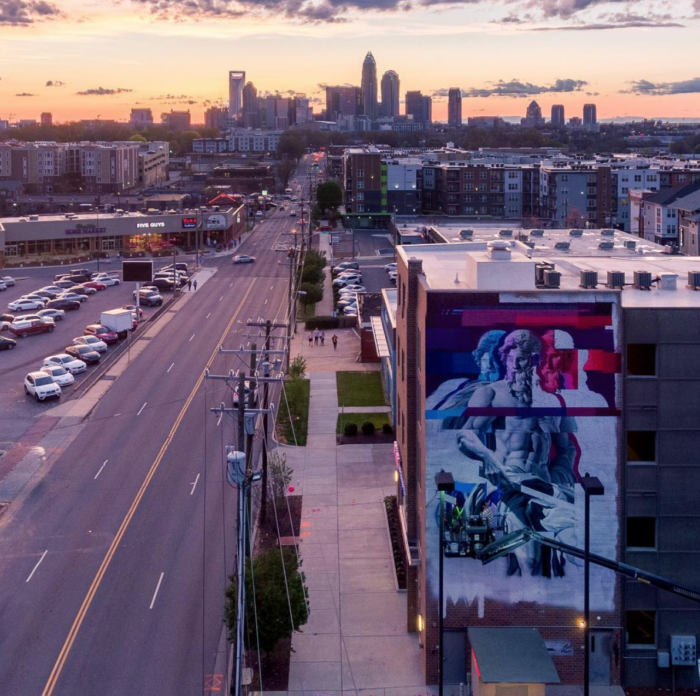 Egan also works with the building’s owners, so he planted the idea of a large-scale art project. He’d already been a fan of Hooker and Moore’s work, and they were eager to tackle the job.

That still required plenty of legwork, with the neighborhood association and Plaza Midwood merchants chipping in, and a Go Fund Me page helping to cover the costs.

The end result, however, has been worth the wait.

For the neighborhood, Egan said the mural will become an iconic image synonymous with Plaza Midwood. For the artists, the building offered a rare opportunity to showcase their work on a massive canvas. And for the residents and commuters passing by, there’s been plenty to cheer about. 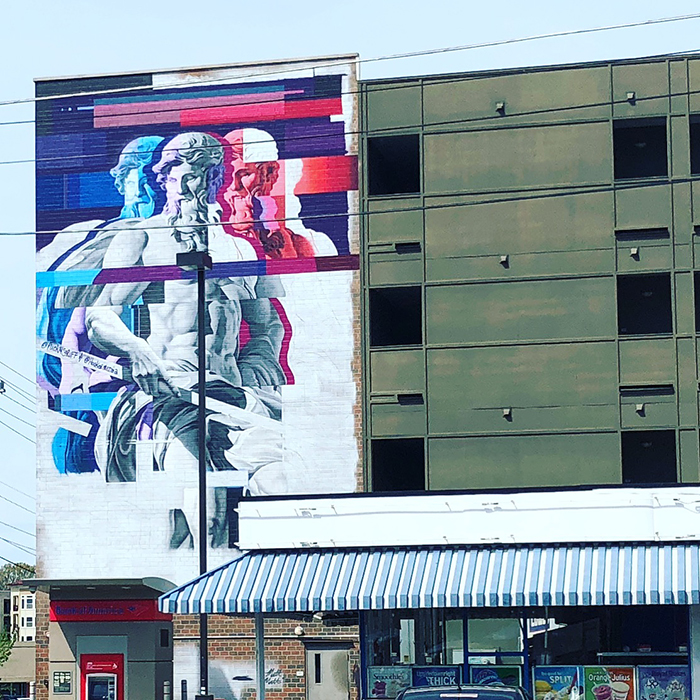 “The feedback’s been awesome,” Moore said. “We had a couple people say this piece makes them proud to be from Charlotte, which is a pretty cool compliment. It feels like Charlotte art is becoming relevant.”

Dear Agenda: “Now that it’s warm, what are some of your favorite outdoor activities in Charlotte?”