When people step into my living room and see a stack of library books on the coffee table and a Kindle, also filled with books from the library, thrown haphazardly on the couch, they’re confused.

“You check out books from the library?” one friend asked, picking up one hardcover book and turning it over before placing it back on top of the two it was perched on. “People actually still do that? I don’t even think I have a library card.”

My turn to be confused. I’ve said it before and I’ll say it again – I’m a Charlotte Mecklenburg Library power user.

But I had to wonder: Do people still do that?

“The answer to all of your questions is ‘yes,’” Cordelia Anderson, marketing director for the library, told me when I asked about whether membership numbers and physical checkouts remained strong despite new elements like Kindles. “Over the years, it has gone up, it has gone down, but right now, overall, it’s an upward trend that we’ve been following since the recession.” 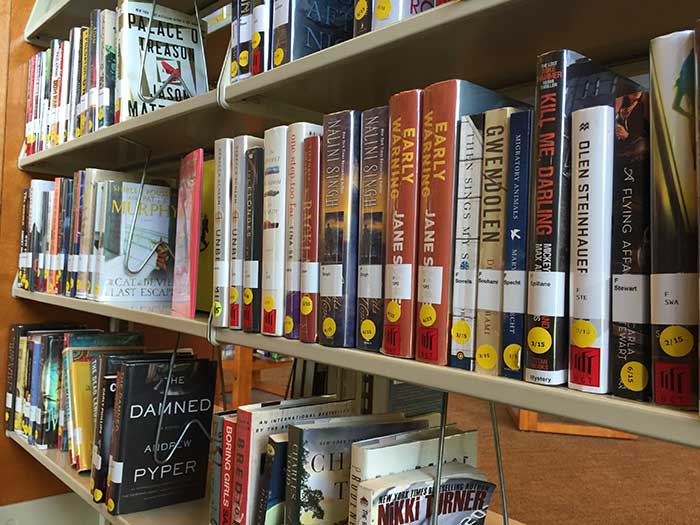 When Charlotte was hit by the recession in 2010, Mecklenburg County looked to make up for the revenue shortfall by cutting library operating funds in half, or about $15 million. When it realized instead how valuable the services were and how “upset” people became at the idea of their library being closed, that number was reduced to 1/3 – about $10 million.

Instead of seeing a shutdown of most of the branches, the system saw just 4 close, but a reduction in hours and a substantial amount of staff members let go.

Now, with a portion of the money back in place, the library has been able to reopen 20 branches, hire back staff, expand hours and close its Morrison branch for a year in order to give it an uplift.

Despite the recent, somewhat tumultuous past, there’s been an overall steady rise in the number of active cardholders in the last 5 years.

67% of the county’s residents reported visiting or using the library during the same year, yet another rise. 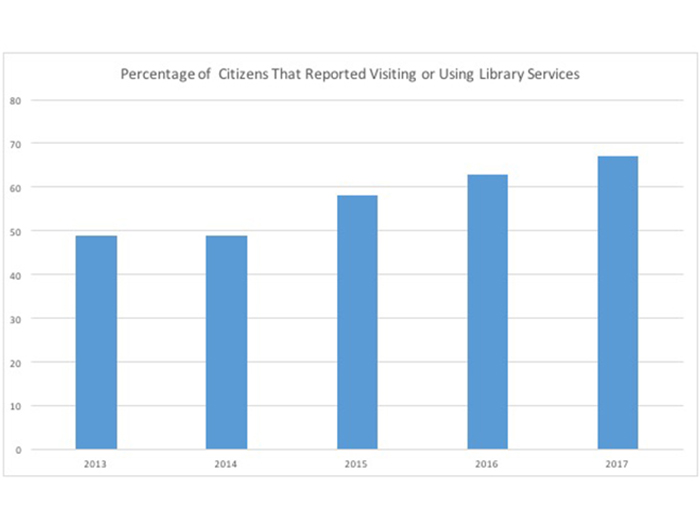 At the time of publication, Anderson estimated “around 385,000” active cardholders, but expects that in reality, this number is lower than the actual number of users it sees come through its doors. While a number of services require membership, community activities and benefits such as free WiFi, story time and other events, do not.

The ONE Access program, through which CMS students are given library memberships using their student ID number, is one of the largest drivers for growth, Anderson said. Through the program, students are given access to the entire catalog (and allowed to check out up to 10 books at a time with no overdue fines), digital materials and research databases. By the end of 2015, over 100,000 students used the library with the membership.

In 2017, 4,799,023 physical items were checked out, down a small amount from 2013. The circulation of digital items, however, has skyrocketed in the last 3 years, surpassing 1 million last year. 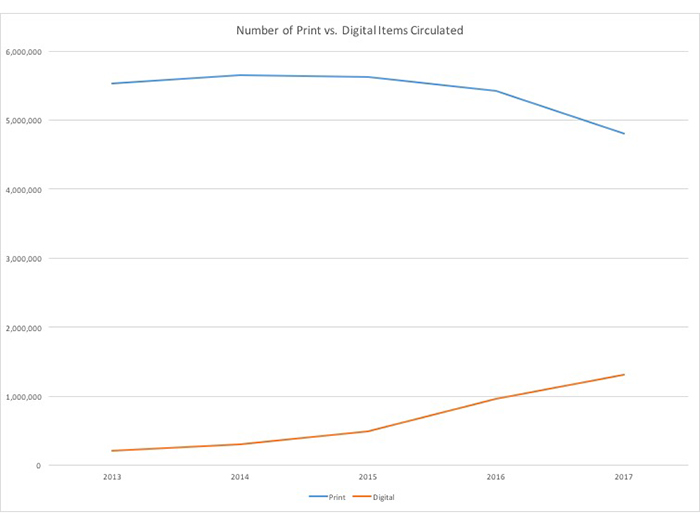 This wasn’t a surprise to Anderson, who said that digital materials now count for “about 1 in every 4 checkouts.”

While the number of physical items in the library’s collection has dipped to just over 1 million – the number of digital items has grown more than ten fold since 2013 – it still manages to make up 75% of business.

“The book is a permanent piece of technology in many ways. It’s durable, it’s all-weather.” 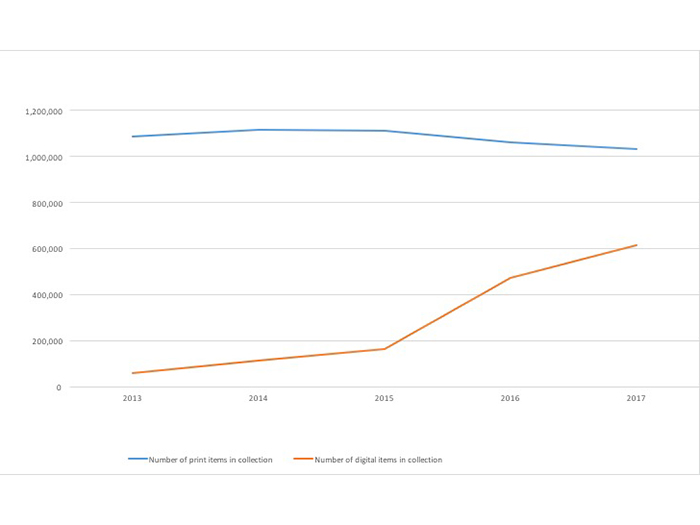 It’s as permanent as the library itself. There’s never been a question as to whether or not the library plays a crucial role in Charlotte – in 2015, 85% viewed it as a top institution, and by last year, 91% did.

Almost 130 years in and stronger than ever, the library is looking forward and knows exactly what it wants to become in the next few years: Essential.

“The word we’ve really landed on is ‘essential,’” Anderson said. “We know the library is important to people, but what we want to be is essential to the community.”

Evolution is key in this goal, and that means focusing less on books and more on people and changing with them, she continued. Whereas years ago, it would have designed a building with plenty of room for heavy books to sit on heavier shelves, the library is now building itself around room for people. Think meeting and study rooms, collaboration spaces, flexible shelving and access to things like book club kits, the Lynda.com database, which offers 3,000+ online classes and another 130,000 educational videos and maker spaces like the Main branch’s Idea Box, which comes complete with 3D printers and CAD stations.

It’s more than just designing the inside of the library, but the space outside of it, as well – events like Jazz at the Market, Final Draught and Charlotte Time Capsule also made their debut in the last year.

[Related: 5 things you may not have known you can do with your library card]

The most important aspect of being an essential part of the community is making technology accessible, says Anderson. When Charlotte ranked dead last out of 50 cities in a study on economic mobility with just a 4.4% chance of rising to the top 20% of the income distribution, the library knew it played a crucial role in working to close the gap.

Today, visitors have access to 4 Job Help Centers with staff trained in résumé services and dedicated job seeking programs, as well as an online job board. Every day, staff is teaching visitors everything from how to turn on a computer to how to utilize Skype for a job interview.

“Part of that opportunity gap is digital inclusion and digital literacy. We can’t afford to leave behind people who don’t necessarily have the financial means to have the latest and greatest technology. That’s where the library really has a role to play.” 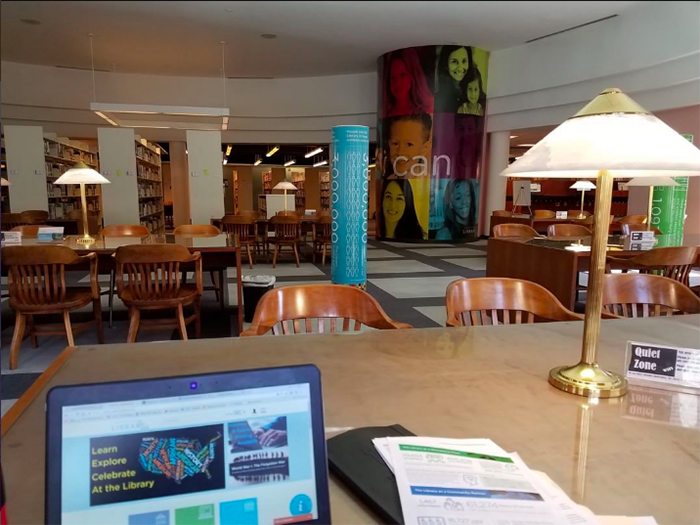 In her almost 20 years with the library, Anderson says her sense of pride in its evolution really begins to beam when she takes the time to be in a branch and see just how community-facing it’s really become.

As it works to become even more of a presence in the community, the next big step is the creation of a new, enhanced Main branch with a “public commons” feel as part of the North Tryon, 2019-2023 Capital Improvement and 2020 Vision plans. With $65 million from the county and another minimum of $15 million generated by private fundraising, the final product will be “exceptional” and, again, essential.

Member desires, wants and needs are at the forefront of the new multi-million dollar design, with, so far, two Town Hall-style meetings in which ideas for programs, services and spaces for the branch were discussed at length. The next round of renderings are expected to be revealed summer of this year.

Top 10 cities where Agenda readers lived before moving to Charlotte