Blind Date: Kaitlyn, Eric and showing up to a first date with a “smashed” nose 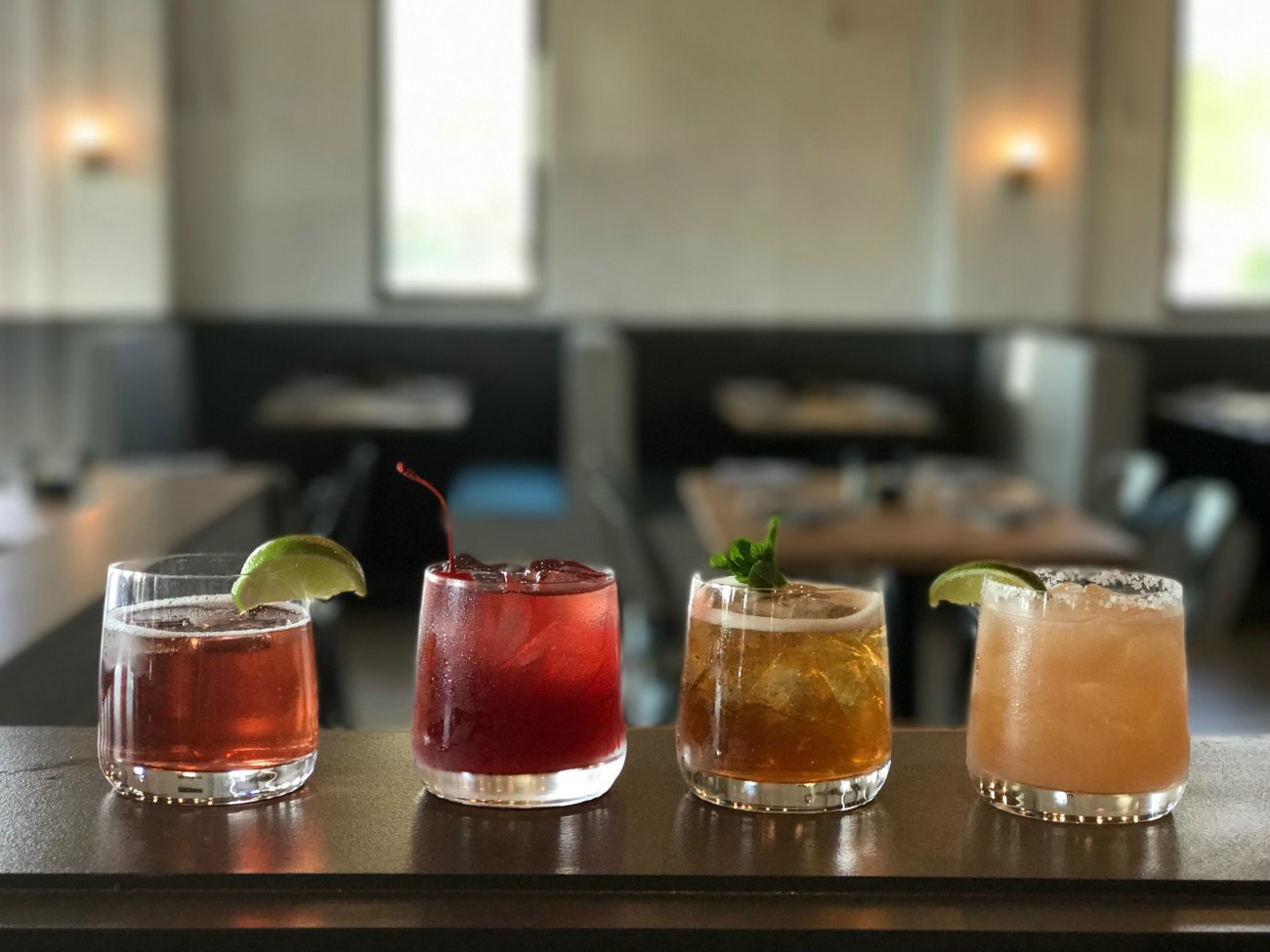 How does it work? Charlotteans fill out this 37-question Agenda Blind Date Survey about their make-or-breaks, their ideal types and their ideal dates. Then the Agenda plays matchmaker by sending couples out on blind dates. Below are the results.

This is the latest in a multi-part series in which I match single Charlotteans of all ages.

Applicants sent me a few details on things like their views on politics, religion and marriage and trusted me to send them on a true blind date.

Those selected don’t know anything about their date except the essentials – name, age and one thing that I thought would make them a good match. They don’t even get to see a picture.

After sifting through over 1,100 applicants, I set aside several pairs and, based on their survey answers, set up a date I thought they’d enjoy.

Next up: Kaitlyn, a 24-year-old Multimedia Specialist, and Eric, a 23-year-old Environmental Consultant. 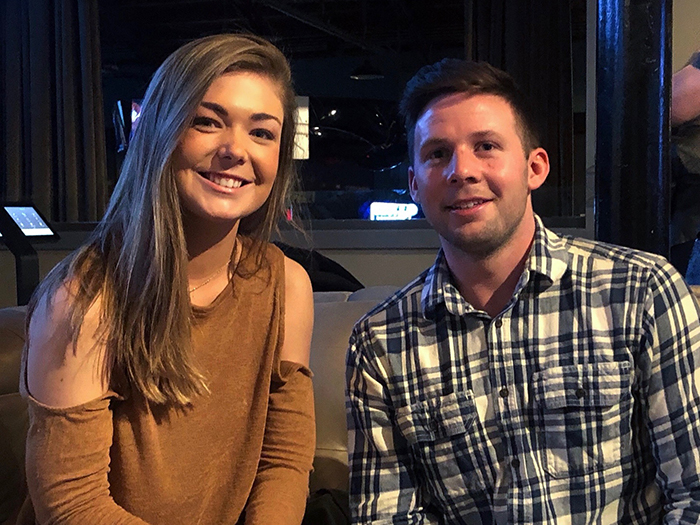 I matched the two because they like to spend their time at the same bars and restaurants, in the same neighborhoods and have a shared sense of humor, as evidenced by their choice Netflix binge (The Office). Plus, their best friends described each as the life of the party that’s able to turn anything into a good time.

They both describe a nice meal with a few drinks as an ideal date, so we sent them to Queen Park Social for dinner, drinks and a few rounds of bar games (whose roster includes everything from giant Jenga to bowling to basketball).

Two days before the two were set to meet, I got an e-mail from Eric saying that he’d “shattered” his nose the week before and was set to have everything taken care of the day before. We were initially worried that he’d cancel due to swelling and pain, but like a trouper, stuck it out, swelling and everything.

Here’s how it went.

How do you feel about the dating scene in Charlotte? And if you’re in it, how are you meeting people?

Kaitlyn: I feel like, recently, I haven’t been dating a super lot. About a year ago, I was doing it a lot more using Tinder and Bumble and stuff, but that stuff kind of gets boring after a while. So recently, I haven’t been dating – yeah, not a lot. I think I’m kind of just in the spot where I’m focusing more just on my friends and myself and worrying less about finding people on apps or anything.

I’d say I’m open to dating, but just not actively searching for it. If I were to meet someone, I guess it’d be while I was out, but when I’m out, I’m just focusing on hanging out with my friends, so I haven’t really met anyone except for on Tinder or Bumble in a really long time, and I haven’t used those in a while.

Eric: I’ve lived here for a little over a year, but I’m not dating much. When I do meet people, it’s usually through friends rather than apps. In college, it was just easier to get out and do things, I guess, than it is in Charlotte, when you’re always working.

How did you feel leading up to the date? Were you ever nervous or hesitant, or was there ever a moment you had second thoughts about letting a total stranger send you on a date with another total stranger?

Kaitlyn: I think the idea of going on a blind date is pretty fun. It’s not something that you can really do in 2018 with social media, so I thought it’d be an interesting experience. I was nervous about the initial interaction, because I had no idea what he looked like, so that nervousness of approaching someone who might’ve been the wrong person was pretty real, but besides that, I don’t think I was – the actual date didn’t make me too nervous. Just the initial interaction.

Eric: I got a little nervous before, I guess, because I’ve never gone on a blind date before. But other than that, no, everything was fine.

Kaitlyn: I got there and I was nervous, so I just went to the front, tell them I’m here for the reservation, and bank on him finding me. I sat down – you told me he was wearing stripes, and he wasn’t. He was wearing plaid, so I wouldn’t have picked him out. I mentioned that I was thankful that he walked up to me because those aren’t stripes and he goes, “What are you talking about?” I was like, “That’s plaid!” and he goes, “Well, there are stripes on it.” Sure, there are stripes in the plaid pattern, but… [laughs]. I was glad he picked me out because I would have had no idea.

Eric: I mean, it was like the back of her head, so… I guess nice hair. She had a nice smile.

Let’s talk about the shattered nose.

Kaitlyn: He kept saying that his nose was so huge and that, “Oh, I’m so embarrassed, my nose is so big.” I’ve never seen him before, so to me, it didn’t seem like anything massive. I guess there was a little bruising and a little purple, but nothing crazy.

Eric: It’s swollen, but it’s functional. I was playing basketball and got elbowed.

Did you guys get along? What’d you like about each other, and what was the vibe? Was there chemistry?

Kaitlyn: We did dinner first, and then we went bowling for a little bit. We were there for a while. We got there at 7, and I guess I got back to my apartment around 12. Dinner took a really long time. They were super slow, with the addition of two huge parties that came in after us.

He seems like a really cool guy. He was funny, very normal and someone I can see myself being friends with. I’m not sure if there was any kind of connection there beyond that, but you can never really tell from a first date, but he seemed like a cool guy.

We got along. It went fine. There were like a trillion awkward pauses, but I don’t know if that was just circumstantial because of the way that we went on the date and because we hadn’t had any interaction before that, but there were a lot of awkward pauses. He seems really cool though, and he seems funny, but I’m not… I’m not sure if there was a connection because there was a lot of breaks in conversation.

I don’t know if it was because he’d also just shattered his nose, and he just got that stuff out the day before, so maybe he just wasn’t feeling well either. I don’t know – I think… it wasn’t bad, I just felt like we were both pulling at things to bring up and it wasn’t just smooth flowing conversation. 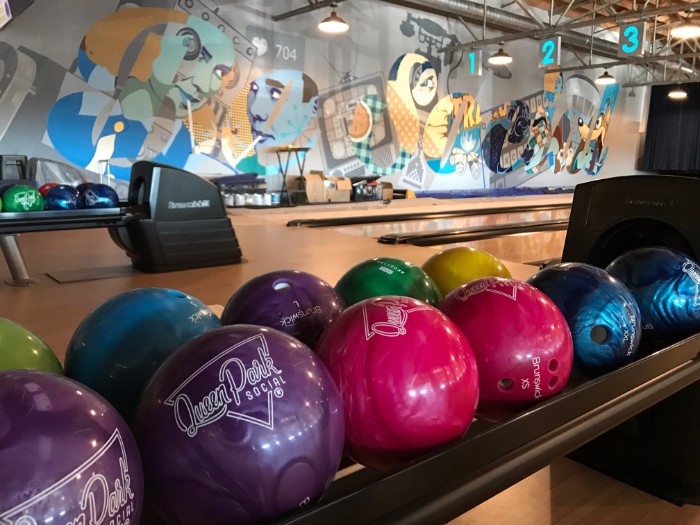 Eric: I thought we got along. We did dinner and drinks and then did a good amount of the games, like we went bowling, played Jenga and tried to play shuffleboard, but we couldn’t find the stuff for it.

We talked about a lot of things, like where we were from, where we went to college, all of these other things – I’d say we got along pretty well. We watched a lot of the same TV shows and talked about that a little. When it comes to conversation, I wouldn’t say there were that many awkward pauses, but there were some just because on a blind date, it’s hard to avoid, I feel like. I think there was chemistry and would go out with her again. We talked about it.

How did you leave it?

Kaitlyn: We finished bowling, and we’d just gotten new drinks, so we finished them and played Jenga for a little bit until we finished, and it was getting close to midnight and it was a Thursday, so I was ready to go to bed.

I’m so awkward, but I was like, “Oh, I guess we should exchange numbers now…” so we did, and I just, like, left in an Uber. I gave him my number, and he texted me on Friday and we had a brief conversation and we talked about potentially meeting up again but didn’t make any real plan for it.

Eric: We stayed pretty close until they closed. She took an Uber and I drove, so she took an Uber and gave me her number just before she left. We’ve talked since, but it was more like we’ll do it again but haven’t planned anything yet.

What rating would you give the date? Let’s do it on a one to five scale.

Kaitlyn: I don’t know. I mean… hm. I didn’t think about this one, and I know you ask it every time because I read the articles, but… I don’t know. He’s a 5, he seems really cool and fun. The date, maybe a 4. But I don’t know if I’d switch that either. I think bowling, sometimes things like that can be really weird if it’s with someone you’re just not clicking with – like, you’re bowling, they’re sitting down and then they’re bowling, you’re sitting down. It can be really terrible if it’s awkward, and it didn’t feel terrible. It was fine. I’d say the whole thing was a 5, actually.

Update: The two have continued talking and have been out again, in a group setting, since.

Responses have been lightly edited for length and clarity.

Single and want to participate in Blind Date? Here’s the Agenda Blind Date dating survey. Fill it out for a chance to be selected. 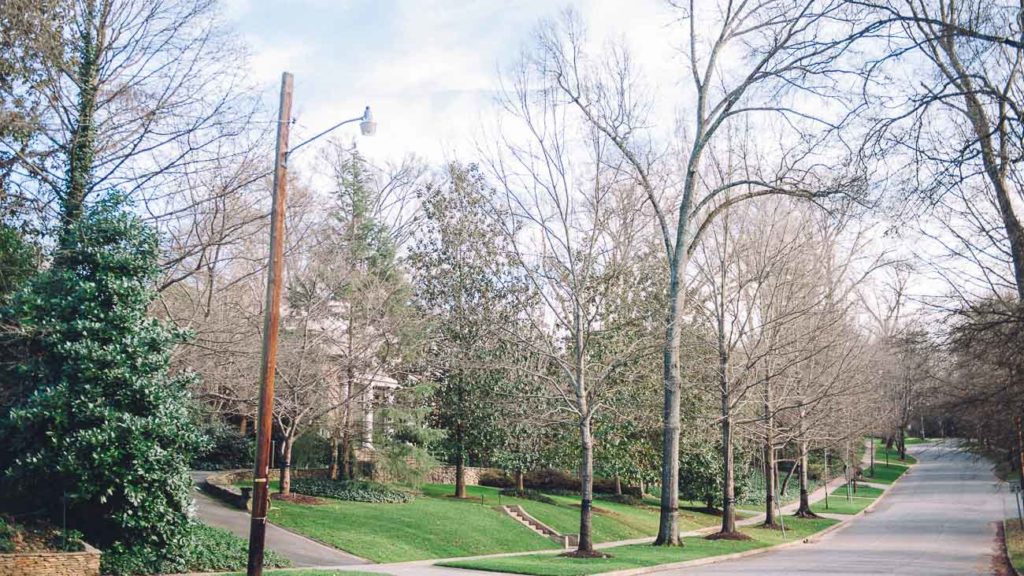