The vision for South End: 15-story towers and a pleasant stroll down South Boulevard 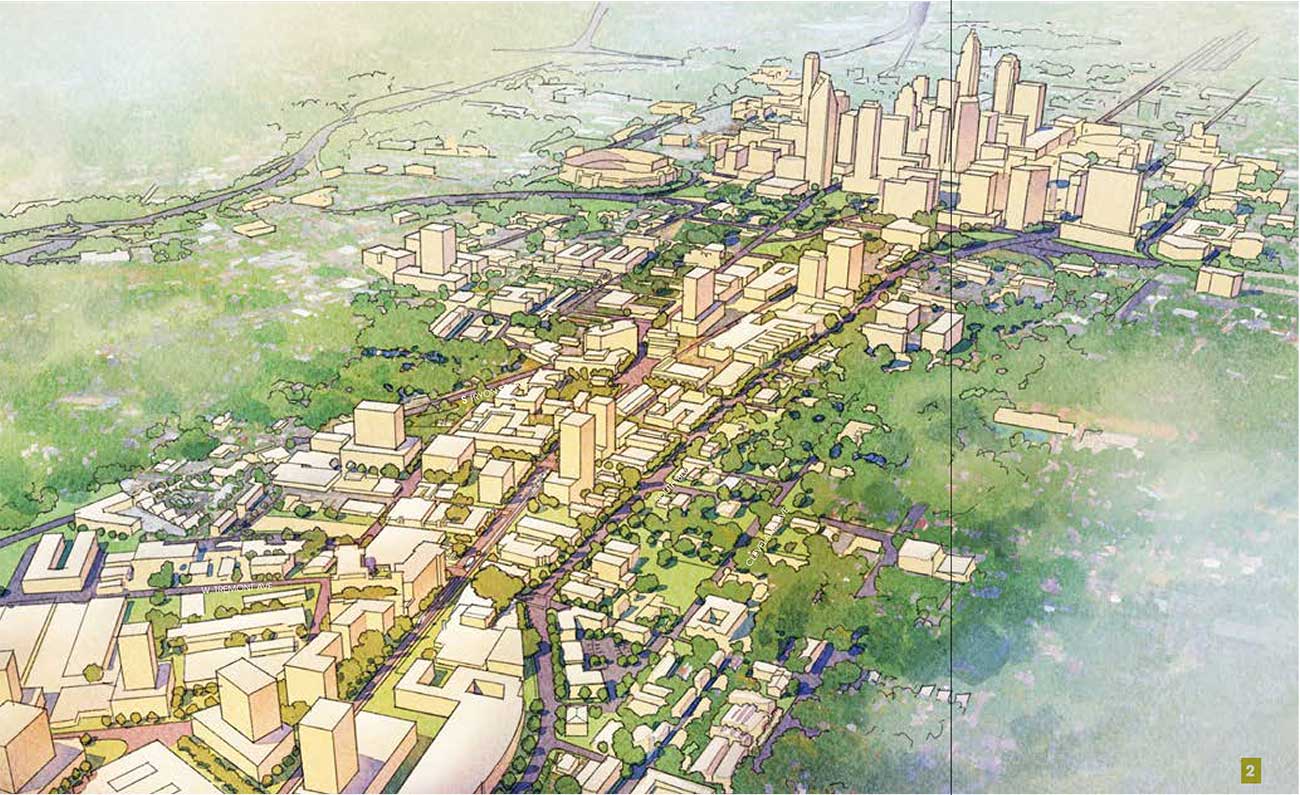 But the neighborhood would try to maintain its funky vibe, with public support behind art and collaborative workspaces. 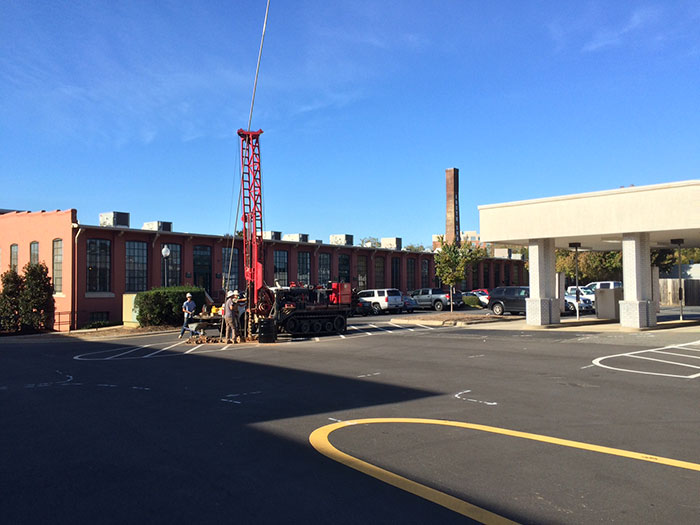 That’s all according to the South End Vision Plan, a comprehensive and ambitious document unveiled by city leaders over the summer.

The plan is now nearing a decision point. The city’s planning commission and City Council are likely to vote on its adoption in the coming weeks.

The planning board will be taking public comments on the plan this Tuesday, November 21 (5 p.m. in the Government Center’s room 280, if you’re interested).

The full City Council will hear comments on the plan at their December 11 meeting.

Here are a few of the basics. Renderings come from Stantec, the design firm that consulted with the city on the plan, and Depicion Illustration. Both of these major roads would be transformed from ugly pseudo-highways to places comfortable for pedestrians and bikers.

South would be more of a shopping and celebration street. City rules could require developers to put retail on the ground floor of all new buildings, and further require them to be built suitable for a wide range of tenants. Tryon Street would be a little more commercial. Office towers of at least 15 stories (the pink Arlington building is 24 stories, for comparison, and the new Kimpton Tryon Park Hotel is 18 stories) would extend from Uptown and cluster around light rail stations.

The centerpiece would be Wilmore Centennial Park, which is just getting underway. 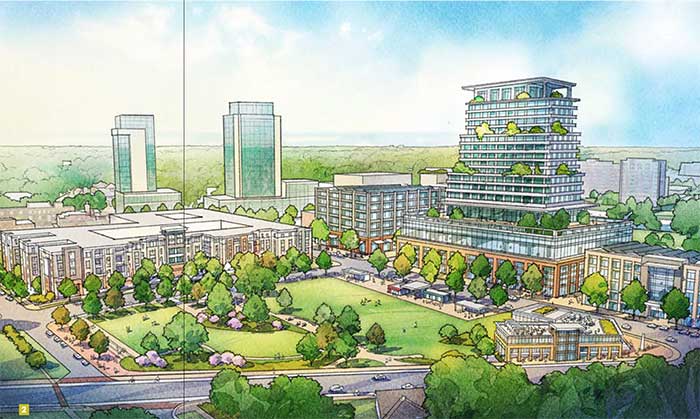 The plan here is to bring in more homes and offices and create a public square around Graham, Bland, Mint, and
Commerce streets. 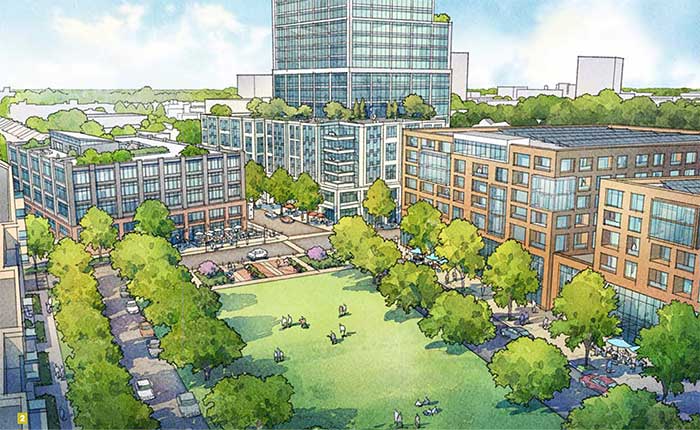 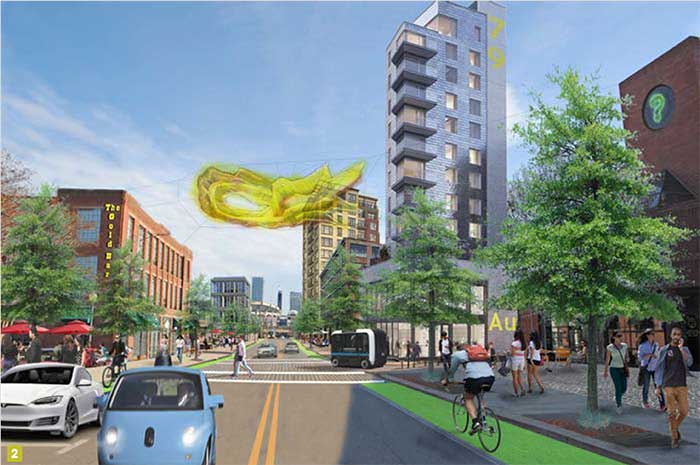 This area is probably the closest today to the ultimate vision. 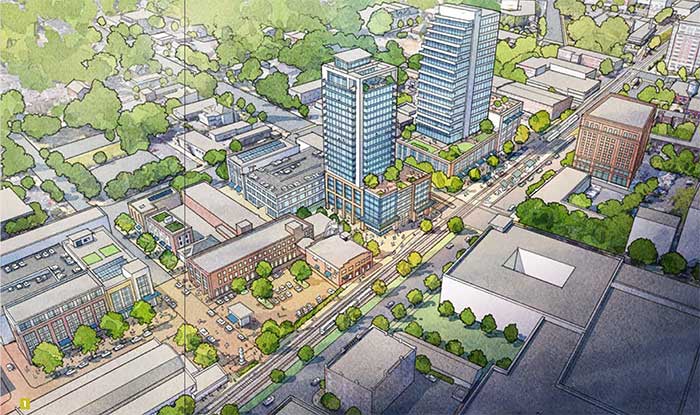 Why does this matter?

It’s easy to dismiss this vision plan as pie-in-the-sky. It is, kind of. And it doesn’t put any money toward making any of these things happen. It relies heavily on developers buying in to the vision.

But it also comes at a time when Charlotte is taking a hard look at its development standards and what it will require developers to do. A strong vision plan gives developers more certainty and saves them money in the long run, making them more likely to build what we’d like to have.

Charlotte also continually issues bonds for community projects. SouthPark is in the middle of figuring out what it wants to do with $10 million. Plans like this could help South End get more of that money.

If you’re not able to go to the public meetings, you can email your feedback to Klint Mullis at Charlotte Center City Partners.

Forget the house. Here’s a quick look at teardowns for sale in Myers Park, Elizabeth and Plaza Midwood