Invite-only dating app The League, with a college admissions-like application process and $200 yearly membership fee, has been frequently branded an exclusive dating app for the hot, popular kids and Ivy League types.

But in places like New York City, San Francisco and London, it’s working – and Charlotte is next in line (and already has a waiting list of over 2,500). 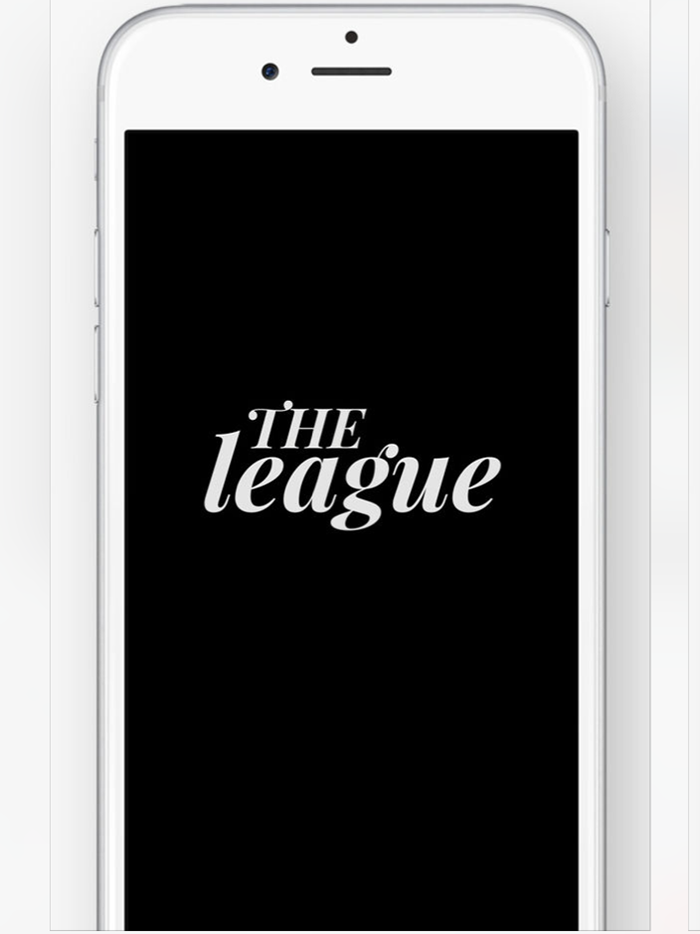 The team behind The League, which promises quality matches without fakes, games or ghosts, doesn’t see it as exclusive or elitist.

“We like to think of The League as a members-only club with a killer singles scene,” Meredith Davis, Head of Communications for the app, available for both iOS and Android, told the Agenda on Monday.

While she declined to comment on an exact number of users on the platform as a whole, there are over 2,500 people on the city’s waitlist so far. Because of the spike in applications and number of people moving to Charlotte every day, it’s debuting almost a year earlier than planned.

This is reflected in the city’s 512-member founding class, which makes up just over 20% of total applicants.

I received information on statistics of the applicant pool:

Davis stresses that creating a diverse set of users is important. Instead of sticking to one industry – say, in Charlotte, banking – those that sift through the applications strive to create a pool full of different backgrounds, both education- and career-wise.

Applications are filled out directly in the free-to-download app, whose tagline is ‘Meet. Intelligently.’, and feels just like building a Tinder or Bumble profile, though a user’s job title and education can’t be customized unless they choose to upgrade.

Preferences are highly specific, and include height down to the inch, education level, race and more.

I went through the application process. Here’s what it looks like after you’ve verified connected your Facebook and LinkedIn accounts: 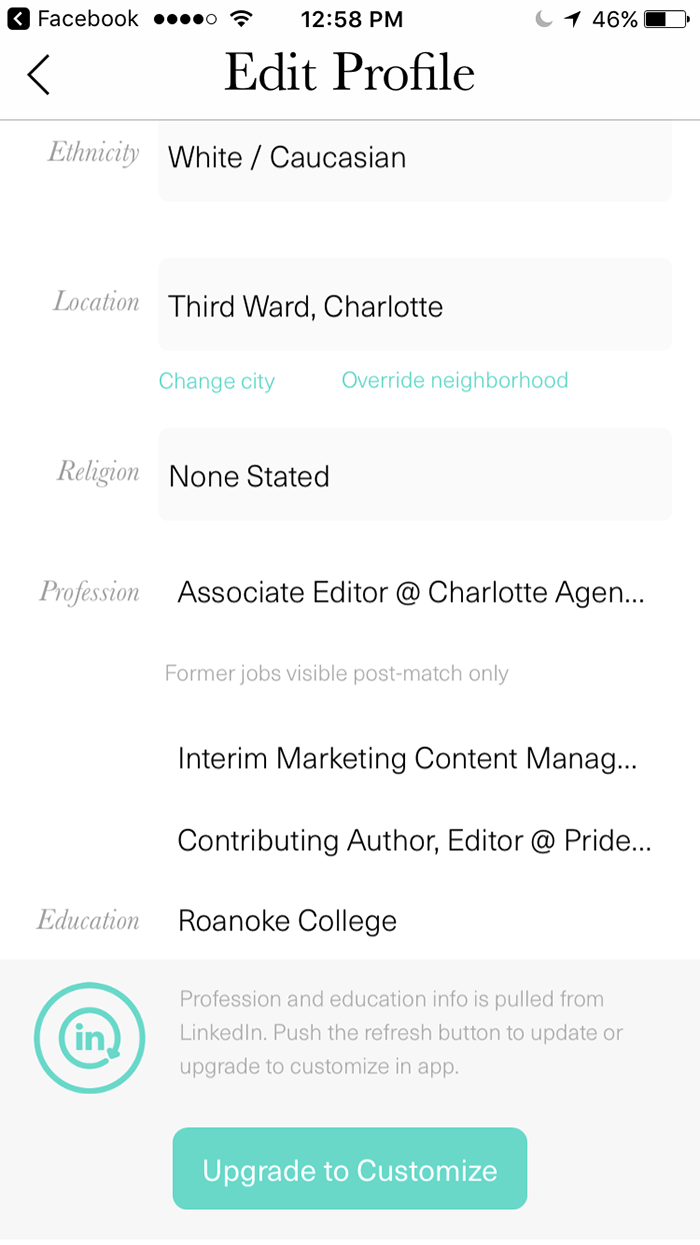 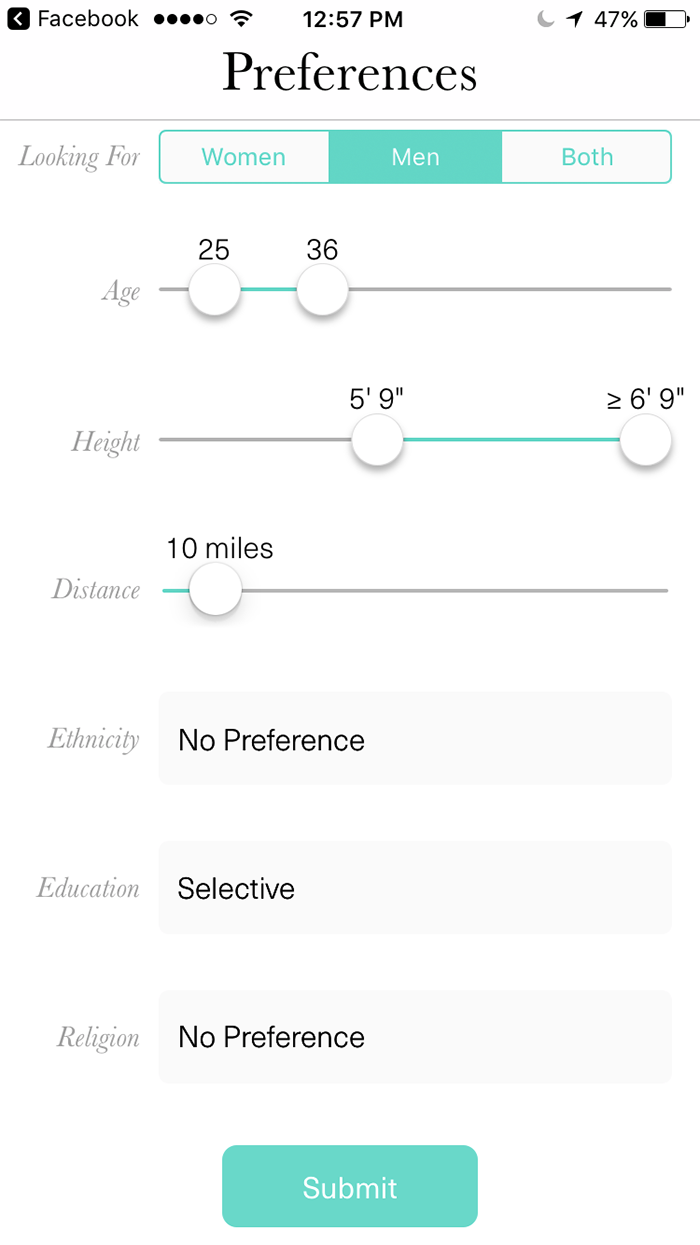 Height, race and education are among those used to generate matches and a potential must fall within a user’s parameters. Even if someone under 5’10”, for example, falls perfectly in line with another’s interests, career and preferred race and education level, they won’t be matched if the other’s height preference is set to 5’11” and above.

And this is the finished product: 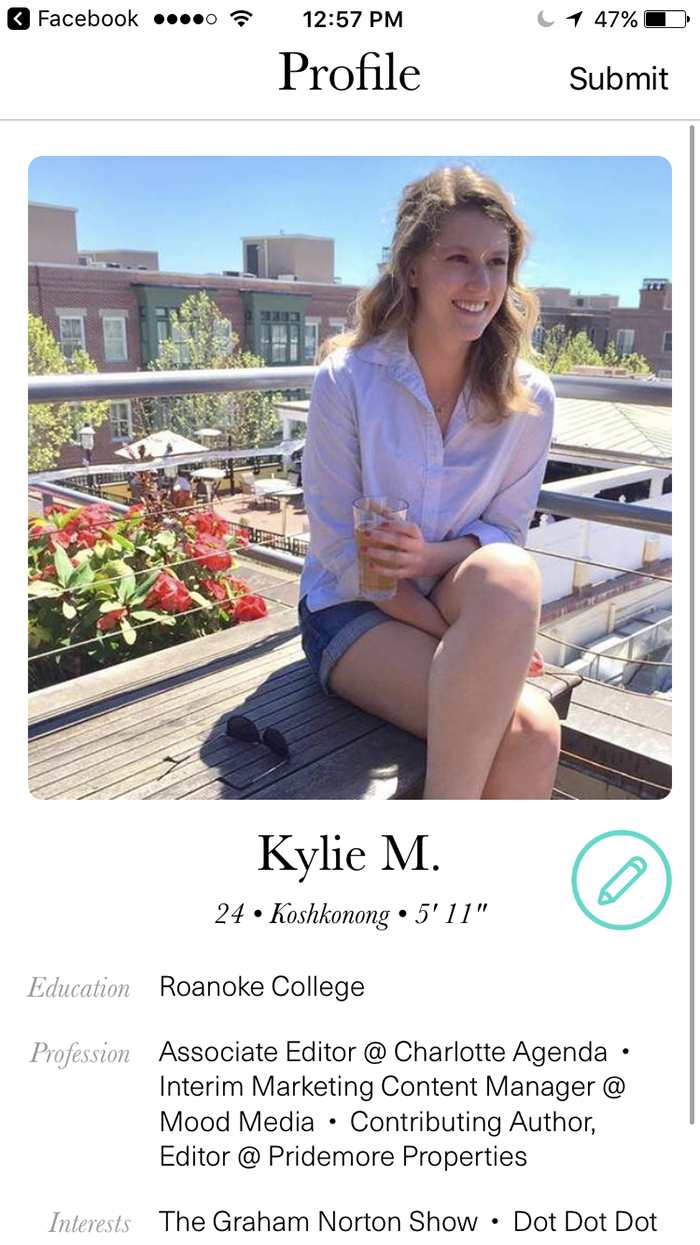 (Read: My application, on which I put in zero effort and let Facebook choose my interests for me based on recent likes, would quickly be rejected. And no, I’m not living in or even from Koshkonong, Missouri.)

Applicants wait 2-3 weeks while a group of just five people work to determine whose photos, education and career are worthy of an invitation to join.

With a 2,510-person waitlist before launch, it’s no surprise response time is slow. Just don’t expect an invitation, even if you pay the $200 membership fee that allows you to skip the line.

Oftentimes, photos aren’t high-resolution enough or have things like sunglasses in them.

Others, career and education don’t fit in to the community and its standards, which “promotes higher education, encourages career-ambition, and, most importantly, cultivates the desire for an egalitarian relationship in both sexes,” CEO Amanda Bradford wrote in a LinkedIn post defending the app. 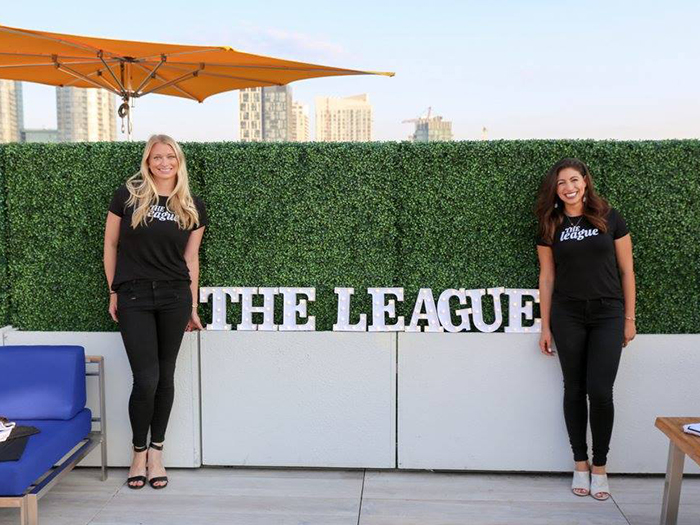 In Layman’s terms, applicants need not apply if they’re not trying to find the missing half of their power couple. In fact, Bradford’s post is titled “I’m Not An Elitist, I’m Just An Alpha Female.”

To ensure this, users are required to provide their Facebook and LinkedIn details. This, though, also guarantees anonymity: No one in a user’s workplace or first circle on social media will come across their profile.

Once invites have been extended and accepted, matches start to be made – though users won’t get the amount they would likely receive on Tinder or Bumble.

At 5 p.m., guests and members alike can log on to see their batch of potentials for the day, a group whose number will never exceed 5.

You read that right. Potential matches aren’t available before 5 p.m. – purposefully, I’m assured, as it’s happy hour – and never will there be more than 5 available to users at any given time.

On The League, the company says, it’s about quality, not quantity.

“While you may not get as many matches on The League as you do on other dating apps, we think that you’ll find more quality and actually want to take it offline,” Davis explained.

The app promises no games or flakes, and works to keep this up by placing users that don’t message matches or log in often on a timeout or, sometimes, by removing them altogether, even if they’re a member.

The team calls their optional yearly membership program, which comes with a $200 price tag, one of the more important elements of the app and something that truly sets The League apart from other platforms.

Members receive expedited review of their applications, concierge service, more potential matches and access to invite-only events (to which members can invite up to four of their own matches because they “don’t have time to go on four dates”) that include happy hours, sit-down dinners and weekend getaways. 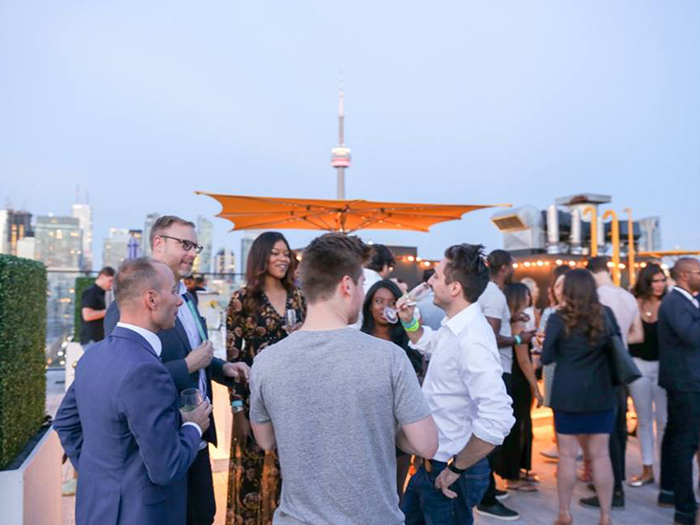 The media has not taken kindly to the app’s exclusivity.

The Miami New Times, in a tongue-in-cheek piece, reflected on its keenness to “descend upon the 305 like Noah’s Ark, ready to pair us into high-functioning, Instagram-ready power couples” and its urging to “keep our “way-too-restrictive-height preferences” set at 6’2″”.

And, in a move that can’t be ignored, Gawker author Sam Biddle penned a piece entitled “Dating App CEO: I’m Not an Elitist, Just an Asshole,” in which he criticized one of the app’s marketing schemes involving a photo of a Depression-era breadline that spoke to the idea of having a high quality waitlist before touching on CEO Bradford’s choice to be “elitist.”

It’s a problem that Bradford tackled directly via LinkedIn, saying that once she received her MBA (after she attended Carnegie Mellon to study computer science on a scholarship), her ranks in both education and career took a toll on her dating life.

“It became clear that I had effectively qualified out a large pool of men that were simply not interested in dating an alpha female,” she wrote, touching on the way comparisons to Millionaire Matchmaker’s Patti Stranger made her “blood boil.”

In building The League, she says, she’s built a way to connect people that will make up power couples to “serve as the role models that our society sorely lacks today.”

Despite such a negative media presence, the app performs well on the App Store, with a solid 4-star rating – but has almost half the amount of 1-star ratings as it does 5-stars.

For each review praising it as the “best dating app out there,” there’s one that calls it a “virtual scam,” or claims the algorithm “makes it impossible for you to communicate” with an already shallow pool of matches on which users hesitate to swipe left for fear of lowering their own popularity score.

None of this surprised The League, who responded appropriately to each claim. The algorithm, I was told, prioritizes users by preferences and factors such as usage, age, distance and education.

And, yes, a user’s popularity rating, which is based on an individual’s acceptance and rejection rate (i.e., how many times you’re swiped left vs. right). Users with the same popularity rating will be matched first.

Though it doesn’t work like Uber’s, where users and drivers will be rejected if a rating drops below a certain number, the company says it won’t rule that option out.

I was told that the incredibly small (25 people small), San Francisco-based company expects these criticisms and that they’re used as an opportunity to get real feedback that can be used to tweak the app in order to create a better experience.

That’s why, when it launches in Charlotte next Monday, just 512 people in the city will have access – it’s better to make changes that impact 512 people rather than 2,510.

Moreover, there doesn’t need to be a large user database to make the app successful in Charlotte.

“It’s inherently niche and invite-only, so it doesn’t have to be a big city to be successful,” Davis said.

You can find The League, based out of San Francisco, on Facebook, Twitter and Instagram and download the app on the App store and Google Play. It will launch in Charlotte, along with its Raleigh, Portland, Nashville, Phoenix and Detroit markets, next Monday, November 6. 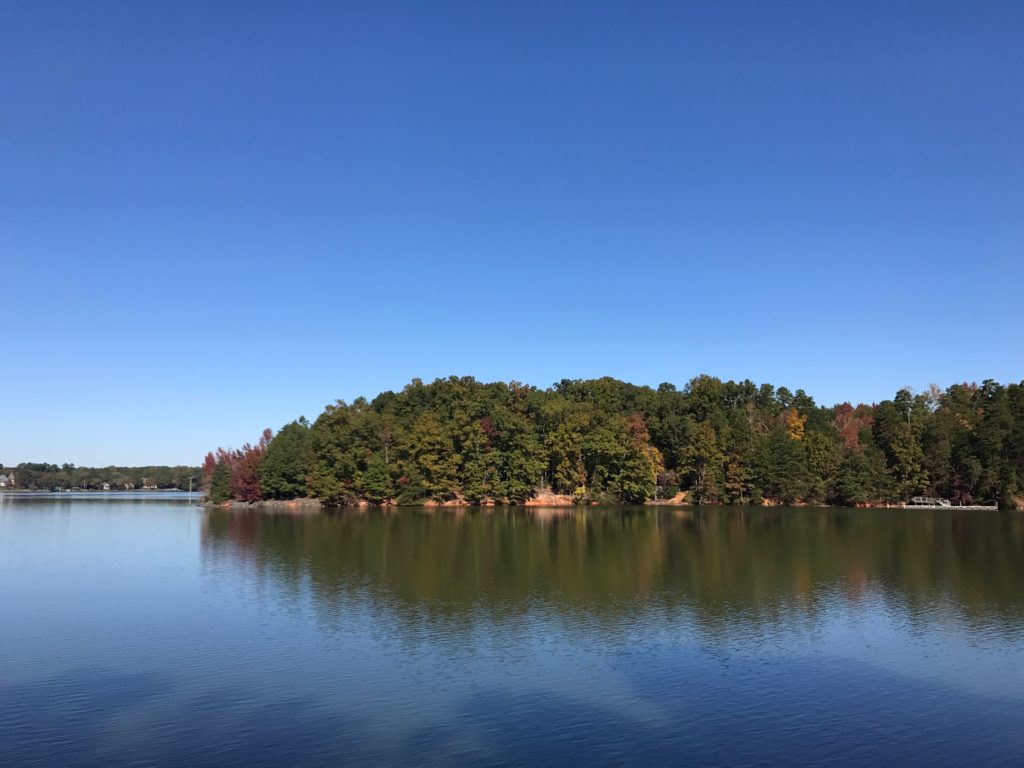