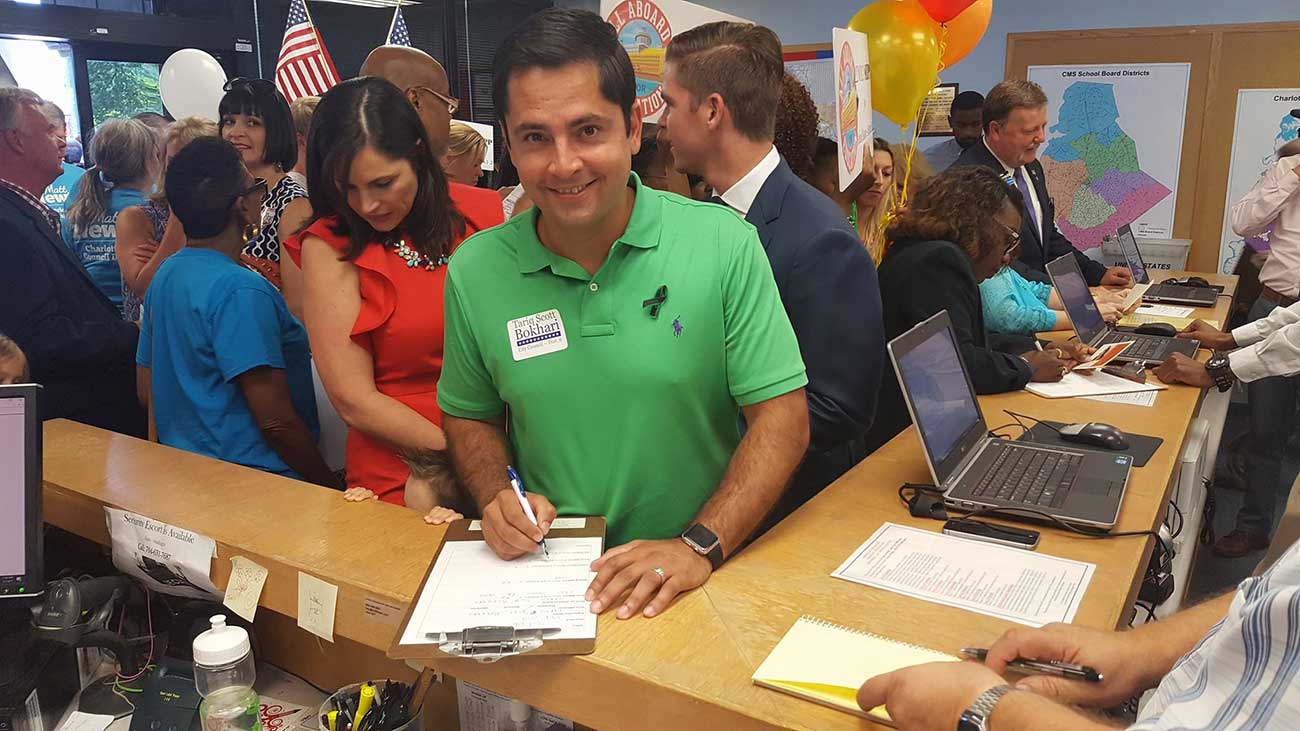 Before his campaign for Charlotte City Council even began, Tariq Scott Bokhari knew he had two strikes against him.

First, Bokhari knew he’d never be able to raise as much money as his opponent in the primary, an influential and well-connected CEO of a construction company.

Then there’s his name (which rhymes with “park,” by the way). As a Republican in a conservative district — that’s just reality.

But Bokhari had been waiting for this chance for a long time. The current councilman in his district, Kenny Smith, was vacating his position to run for mayor. And Bokhari knew that if he played his cards exactly right, he’d have a chance to fill that seat come fall. 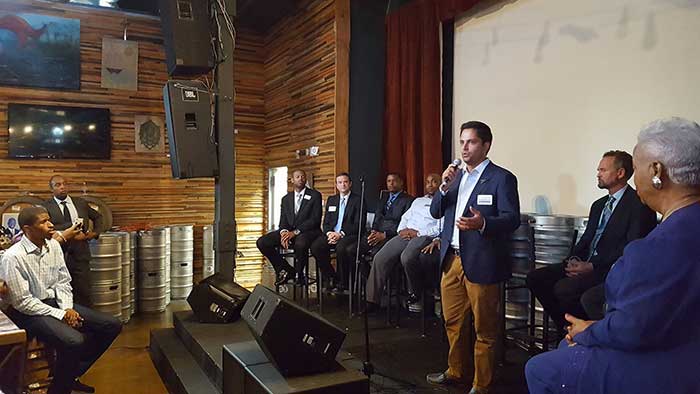 Thus launched a two-month sprint for the Republican nomination for south Charlotte’s District 6, which culminated with primary election day on September 12.

In the end, Bokhari was right on all counts.

He was outraised nearly three to one. Opponent Eric Laster, CEO of construction company Edifice, brought in about $100,000 compared to $33,000 by Bokhari, according to the most recent filings with the Board of Elections.

His name did become an issue, one that he’d have to address head-on.

And he took the Republican nomination with 53 percent of the vote. That sounds like a fairly handy victory, but the margin was razor thin — less than 300 votes.

Bokhari will be heavily favored in November against Democrat Sam Grundman. Between now and then, he’ll focus on helping Smith campaign for mayor while keeping in touch with the voters of his district.

But he’s also taking a few minutes to reflect on an underdog campaign that could easily have been derailed at several points along the way.

His story illustrates what it takes to plan and win district-level campaigns, which are rife with peculiarities — low voter turnout, poor name recognition, smaller budgets.

And it provides a rare insight into the tactics local campaigns use to get out the vote.

In Bokhari’s case, the message was simple: Let’s get local government back to its rightful function, focusing on roads, infrastrucuture and public safety, while keeping taxes low and balancing growth with community.

The strategy was anything but.

“I think we ran a perfect campaign,” Bokhari says.

1) The campaign started with math.

Five thousand. That’s the number Bokhari started out thinking he needed to reach, the potential universe of primary voters in District 6.

The figure is slightly more than the 4,661 people who voted in the last contested primary in this district, which Smith won with 49 percent.

So the first task for the Bokhari campaign was to come up with a database of the 5,000 people most likely to vote in the upcoming election. These would be the people they’d target with direct mail, or have Bokhari knock on their door.

“We spent a lot of time getting that data right,” Bokhari said. The sauce is something of a secret, but it mostly includes Republican or unaffiliated voters who cast ballots in the last several municipal primary elections.

Through a suite of apps, the Bokhari campaign decided to keep notes of when and how each of these voters was contacted, whether it was successful, and what they had to say.

2) Then the street team assembled — with a few clever ideas.

Over the course of the two months, Bokhari and his team of 15-20 core volunteers knocked on a total of 4,200 doors and made 25,000 phone calls. That put the campaign in touch with a quarter of the potential electorate.

When he went out door knocking, Bokhari tried to follow the trash cycle. He would roll the homeowner’s trash cans back up from the curb as a way to start a conversation. And if they weren’t home, he’d leave a sticky note along with the door hanger.

“If you’re the severe underdog, you have to come up with creative ways to grab people’s attention,” he said. 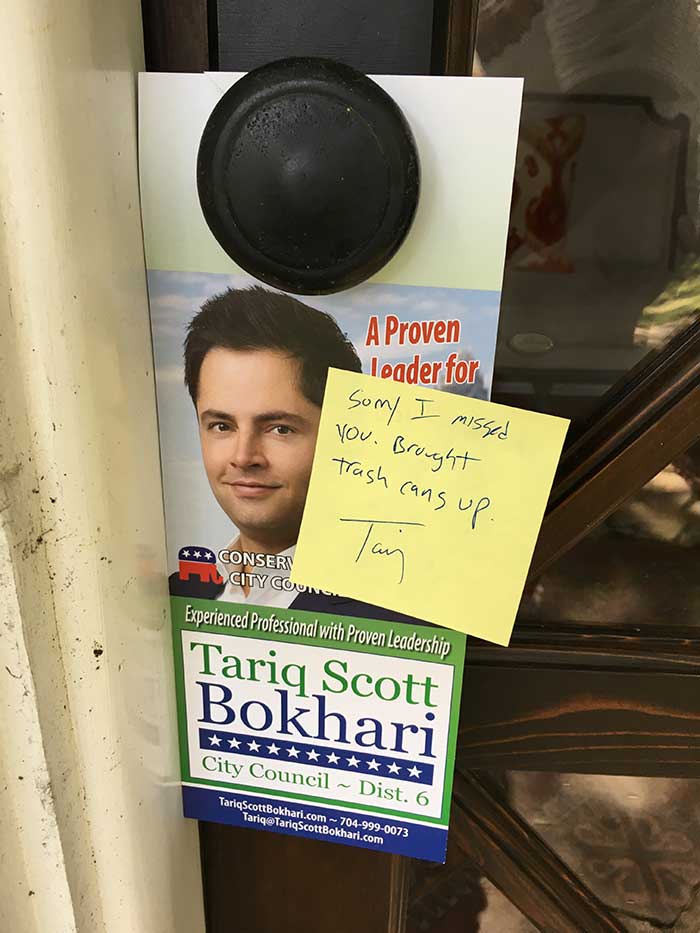 But his wife gets credit for the piece de resistance. She had the idea to post across all the mommy Facebook sites a special offer: The campaign had hired a babysitter who would be willing to jump in the front seat of your car with your kids while you ran in to vote early in SouthPark.

Only a few people took them up on the deal, but they were flooded with positive comments.

3) Bokhari put a big bet on himself.

Going in, Bokhari knew he would be at a spending disadvantage, and in a two-month campaign, there’s only so much time to fundraise.

That left him with a decision to make. Would he run a bare-bones, grassroots campaign that spent something like $10,000 or $12,000? But he knew the odds would go up a bit more in his favor if they spent a reasonable amount of money. He could wager his own money on a campaign that was far from a sure thing.

Bokhari decided to bet on himself, loaning the campaign $21,000 of his savings.

“We redid our entire budget,” he said, asking: What is the bare minimum we need to be competitive? They landed on a fundraising letter, 5 mailers, paid social media marketing and yard signs.

The campaign bank account ended up with about $37,000 altogether. 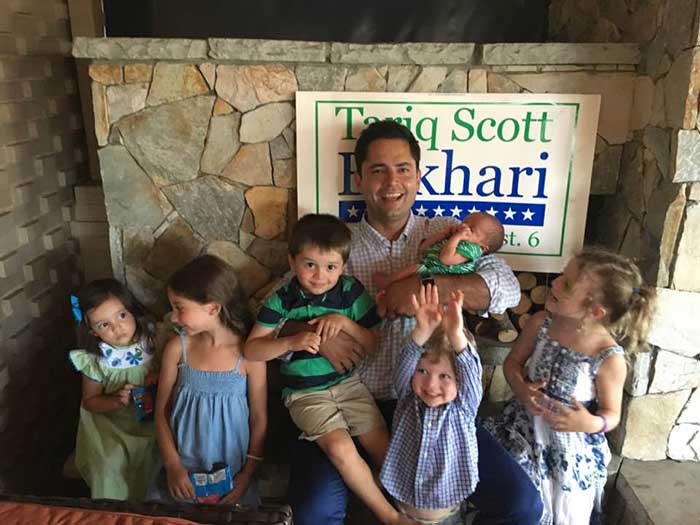 4) He led with his endorsements.

In a national race, endorsements only mean so much. But in a hyperlocal election, when you’re trying to get your name in voters’ minds, it can make a world of difference.

Bokhari had his endorsements lined up before filing for the election. Most of them were personal friends, people he’d helped in their campaigns. And they’re a veritable who’s who of south Charlotte conservatives — Gov. Pat McCrory, former mayoral candidate and county commissioner Edwin Peacock, county commissioner Matthew Ridenhour, among others.

“We put it on everything,” he said. “So they knew, ‘Well if these people support him…'”

The introductory mailers also featured the word “conservative” front and center. Bokhari said he wanted people to know right away that he’s not ashamed of the label. 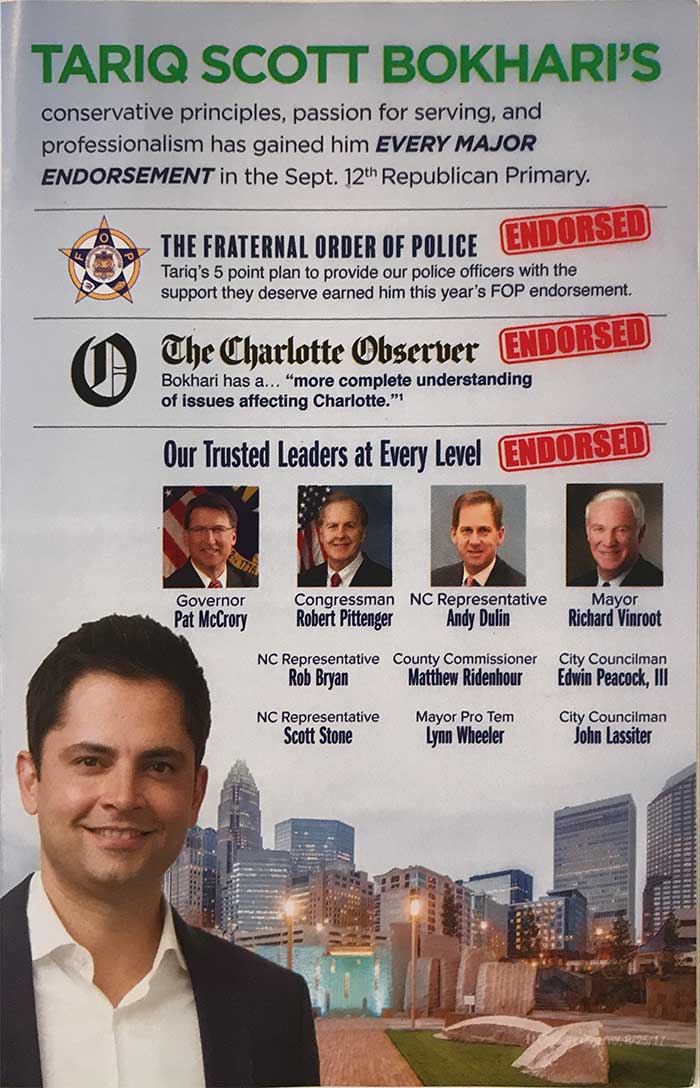 5) He decides to address the name problem head-on.

Bokhari knew from the beginning that he would devote one campaign mailer to his grandfather, a World War II veteran and his inspiration for public service.

Around the same time in the campaign, Bokhari learned two things. One, he learned his opponent was targeting not just regular municipal primary voters, but even-year primary voters as well.

And he also learned that his name might be more of an issue than he realized.

“I’ve always gotten questions about my name. ‘Are you Muslim?’ and stuff like that,” Bokhari said. “But the volume of people asking, ‘What’s your position on Sharia law?’ started to increase. … I said, I need to address this.”

He added a box to the top of the mailer about his grandfather to take on the issue. He also expanded his universe of potential voters to even-year regulars, but only those over the age of 60. 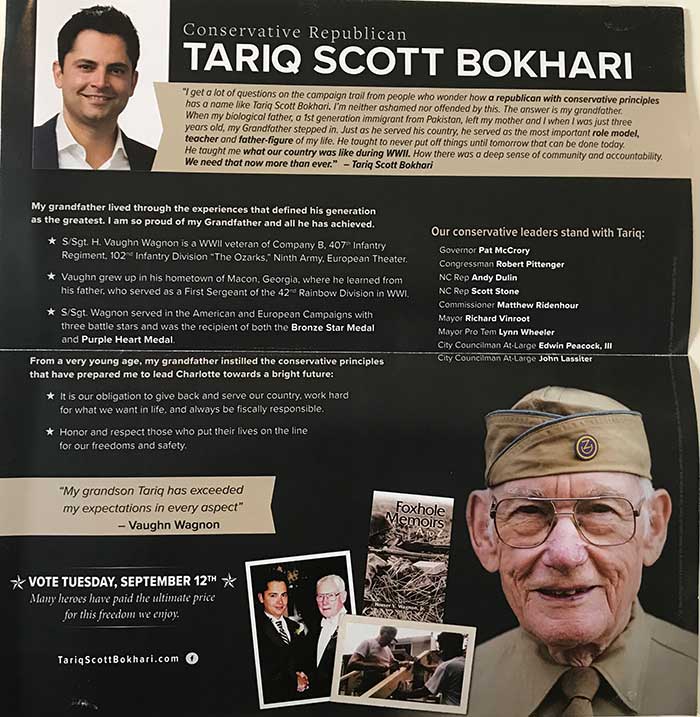 6) Then they got a little luck in a well-timed news story.

Along the way, the name issue surfaced on the radar of The Charlotte Observer. Bokhari is quick to say it was not planted.

When Observer political writer Jim Morrill called asking about it, Bokhari wasn’t quite sure how to respond.

He hastily told Morrill that he’d have to call him right back, and Bokhari called his campaign strategist, Larry Shaheen.

“It wasn’t just a no-brainer,” Bokhari said. First off, he didn’t want to make the name issue a bigger deal than it was. And he knew he was walking a fine edge in talking about it. He could say something wrong, or even handle it the right way and have it backfire on him.

In the end, Bokhari spoke to the Observer and the story — which ran just a few days before the primary election — got his message to a broader audience.

“I got a lot of comments on the article, like ‘I didn’t know you were going through that,'” Bokhari said. “Some people said, ‘I had that question in the back of my head.”

7) Should the campaign go negative?

As the campaign wound to a close, Bokhari was faced with one last major decision: Should they go negative? If so, how much?

They settled on a final mailer that Bokhari described as just above the “negative” line (he called it a contrast). It pointed out the millions of dollars worth of public contracts his opponent’s company had received, raising the potential for conflicts of interest. It also identified a $500 contribution to Democrat Joel Ford’s campaign for mayor.

He made sure it was heavily cited, but the art took a little more creativity. The photo of his opponent came in at the last second, snapped from one of his own mailers about crime. And yes, that’s a Ford button photoshopped on the lapel.

The mailer went out on the Friday, Saturday and Monday before the Tuesday election — leaving no room for a rebuttal. 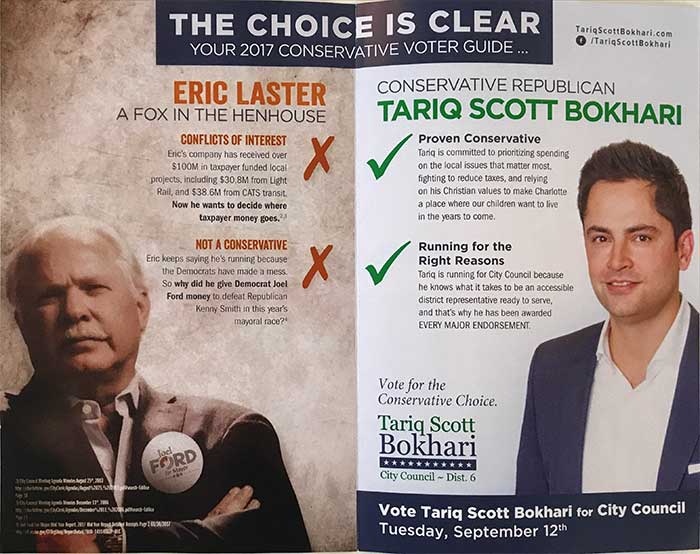 The only thing that went wrong was the vote estimate — which ended up dramatically lower than expected. Bokhari said he heard anecdotally that unaffiliated voters largely cast ballots in the Democratic primary, where there was a heated mayoral race.

When victory takes only 2,180 votes, every decision can make a big difference. 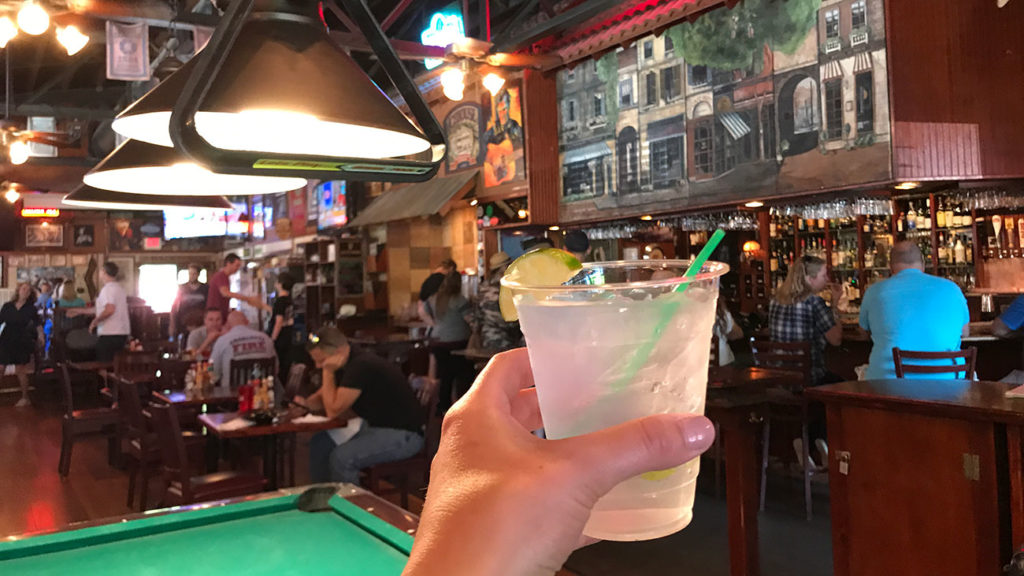 13 Charlotte bars to visit when you want to get weird