Reverse-angle parking is still the worst 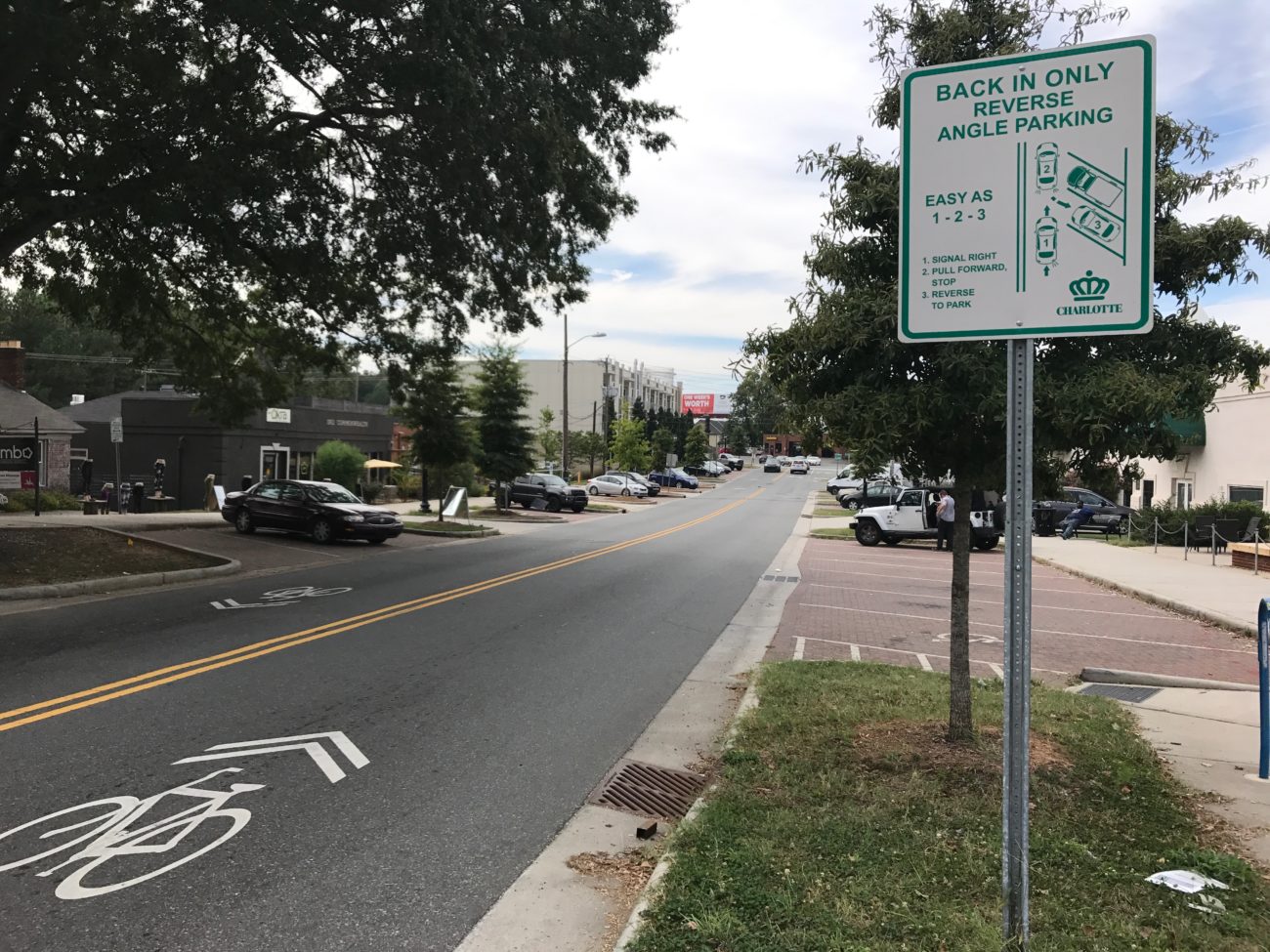 Four years ago, the City of Charlotte debuted a 3-block stretch of reverse-angle parking along Commonwealth Avenue in Plaza Midwood.

The announcement was met with great manufactured fanfare, including a streetside press conference delivered as a rap.

That’s correct. The city paid Jason Lane, a Charlotte native who was living outside Washington D.C. at the time, $250 to perform an original about rap about the new parking spaces.

It was one of the most Charlotte things to ever happen in the history of Charlotte.

Embarrassing conference aside, I hated the new parking then and I still hate it today.

I get it. Driver visibility is improved. You’re reversing out of traffic instead of into it. And it’s quicker to exit. 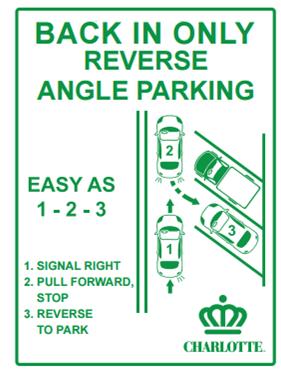 Easier than what though? The city’s RAP FAQ focuses on the pros of reverse-angle parking as compared to parallel parking.

Backing into a parking space may seem unfamiliar at first, but it is far easier than parallel parking.

Parallel parking takes longer and is more difficult for most people.

But no one is asking for parallel parking on Commonwealth. We just want normal head-in angled parking.

A pro for one is a con for the other.

Pulling in to a traditional head-in space is easy, but backing out blind into traffic is tricky. Meanwhile, backing in to a reverse-angle spot is complex and unfamiliar, but pulling forward with a clear line of sight is a breeze.

For both methods, one direction is easy and the other is not so easy, and I think we can all agree that reversing is the more difficult direction for each move.

So why do I hate reverse-angle parking so much more than head-in parking?

I’m glad you asked. I’ve been sitting on this for four years. Let’s break it down with my own responses to a few of the city’s RAP FAQs.

Is backing into stalls difficult? You bet it is! Although the city says it’s “far easier than parallel parking,” no one asked about parallel parking, did they? We want to know why we can’t pull straight in to the spot with our eyeballs facing forward while while we maneuver a tight space surrounded by expensive vehicles.

Is it harder and does it take more time? YES and YES. Again, the city reminds us that “parallel parking takes longer and is more difficult” but, again, no one cares about parallel parking. The point is that RAP is harder and more time consuming than pulling straight into the spot. Just ask the line of backed up cars (im)patiently waiting for you to fumble your way through this move.

Isn’t it easier to just pull forward into a standard angle stall? Obviously, yes. Of course. But! The city would like to remind us that pulling straight in “may seem easier but backing into a street filled with traffic when you leave can be difficult.” Can it? Can it be as difficult as, say, backing into an angled parking spot?

The point is I hate it. 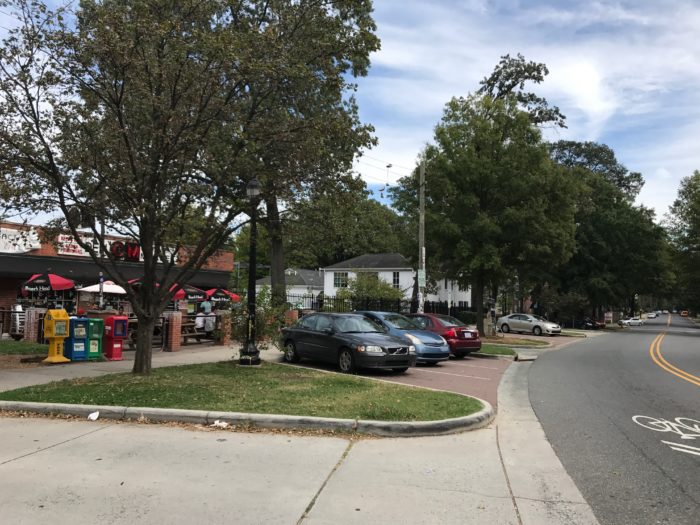 But has reverse-angle parking at least had a statistically significant impact on parking-related accidents on Commonwealth Avenue over the last four years?

I don’t know. The Charlotte Department of Transportation did not respond to my request for traffic accident reports on Commonwealth from 2009 to present. Perhaps it had something to do with me tweeting this immediately before asking:

Anyway, I’ll share the findings when I get them.

If it’s true what they say and traffic accidents really are down on Commonwealth as a result of adding reverse-angle parking, I’ll accept it as the superior parking method… by avoiding it at all cost.

After all, any increase in safety could be due to the fact that a lot of us have just stopped parking there altogether now, right? 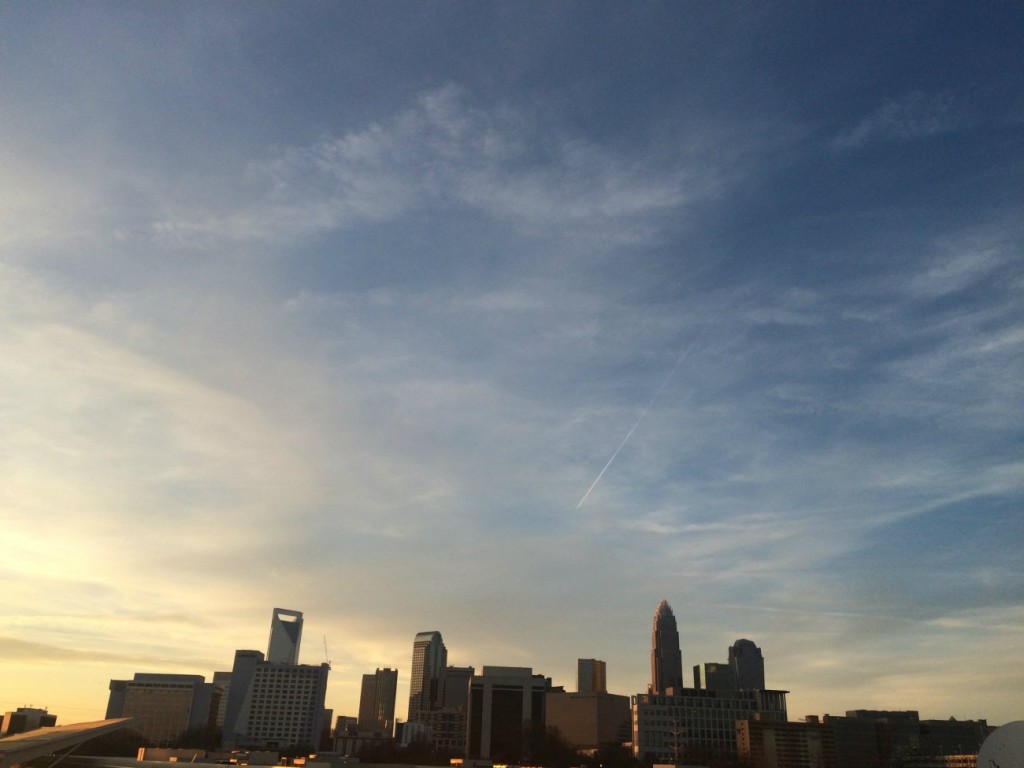 Suburbs may be getting cooler, but they will never, ever be as cool as the city